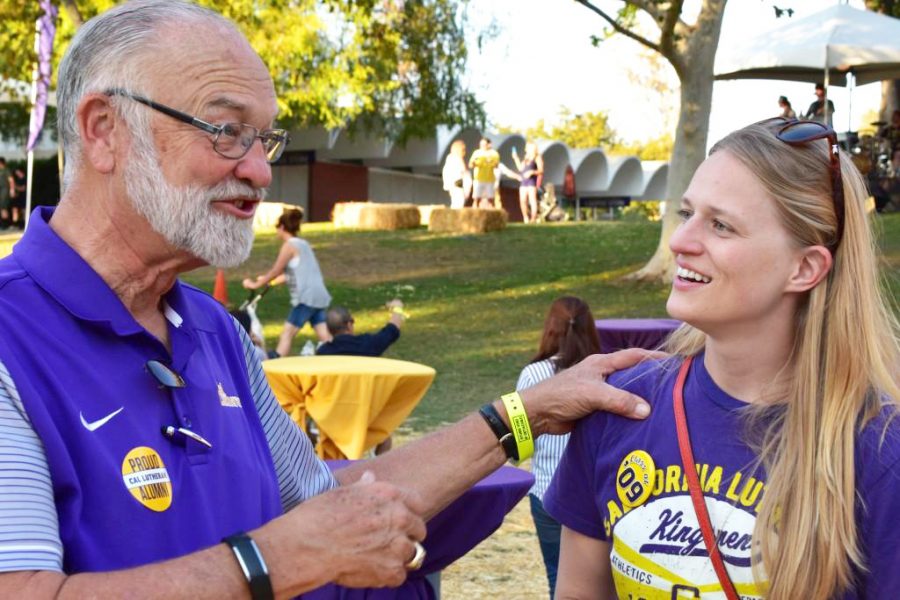 Whether it is throwing out candy at football games or handing out $2 bills, Karsten Lundring, an alumnus from the class of 1965, has supported California Lutheran University and stayed involved in the campus community for the past 60 years.

“The main reason I stay involved with CLU is because of the difference we are from other colleges and universities in that we combine faith and reason,” Lundring said.

Lundring was among the first students to be enrolled when Cal Lutheran opened in 1961. His parents had been very active in the Lutheran church, and contributed to the formation of the school Lundring said.

“That’s why it was pretty much Lutheran students, because our parents were involved in getting it started,” Lundring said.

He was also involved in the creation of the school and has been able to watch it grow, Lundring said.

Lundring and his wife Kirsten both transferred to Cal Lutheran from Pacific Lutheran University in Tacoma, Washington. Lundring graduated with a degree in business in 1965.

“[I] started working with a financial planning company when I was a sophomore at Cal Lutheran, my first year, and then I retired 54 years later from that same company,” Lundring said.

Lundring has been supporting Cal Lutheran sports since his time here as a student. He is known for throwing out candy to supporters at football games whenever the team makes a touchdown. This tradition was not planned, rather it began when he had a bag of candy and threw it out to the crowd when the team scored a touchdown early on in a game. Now this tradition has been going on for 45 years, Lundring said.

“I think we have missed 11 [football] games in 58 years, and that is both home and away,” Lundring said.

In addition to throwing out candy, his signature act of kindness is handing out $2 bills to people attending the games.

“I don’t use business cards, I have handed out 2 dollar bills,” Lundring said. “It’s fun for me and for the people that get them.”

Lundring is also a supporter of music on campus. Both him and his wife were members of the choir during their time at Cal Lutheran. The couple also makes an effort to go to all the events that take place on campus, from lectures to concerts and plays, Lundring said.

“Seeing his name on campus influences me to think about how I can influence CLU in the future and possibly give back to the university through donations,” senior Christine Weyers said.

Some of the alumni from the earliest Cal Lutheran classes meet in Thousand Oaks every Wednesday. This has been taking place for about nine years, and the group is over a dozen people each week. As more people retire, the group continues to grow, Lundring said.

“I think it’s important for alumni like Lundring to attend school events to show that Cal Lu is more than just a place you go to school, it’s a family,” first-year student, Kyrie Fairbairn, said. “People that graduate continue to support the next generation and find joy in the community.”