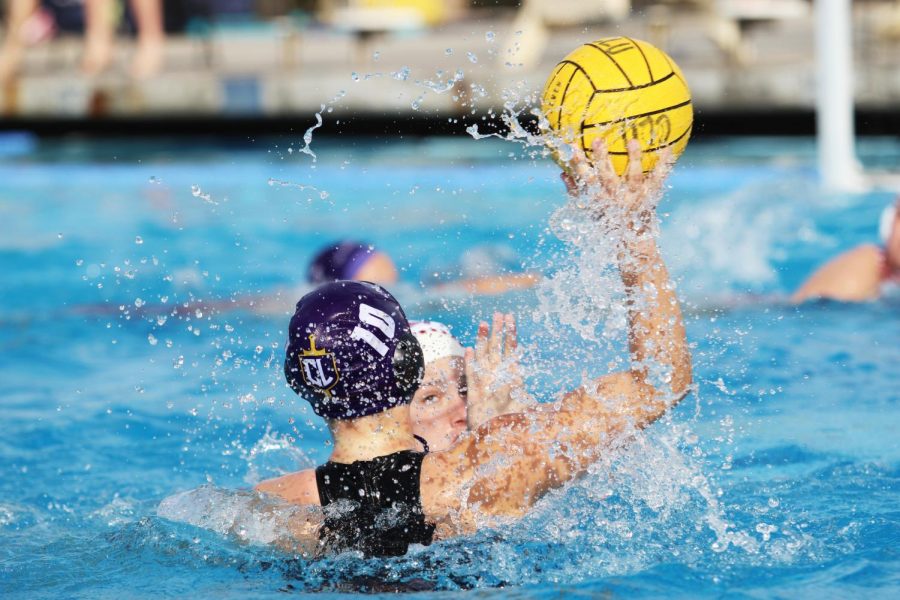 Junior attacker Kemi Dijkstra reaches over Indiana’s defense for a pass to score.

The California Lutheran University Regal’s water polo team faced a tough loss to Indiana University in their second game of the Tina Finali Memorial Tournament on Friday, Feb. 28.
The Regals fell short to its Division 1 opponent by a score of 21-7.
The Regals entered the season as number one in the nation for Division 3.
“That is a very good Division 1 school; they’re one of the top ten teams in the nation. It was rough at the start because I’m not sure that our girls quite believe that they can play at that high level; we’re working towards that,” Head Coach Craig Rond said.
The Regals fell early in the first period, with the score being 2-7 in favor of Indiana. They were able to bring their A-game with 4 goals in the fourth quarter, the highest-scoring quarter of the game.
“We said ‘you got to shed that fear and go play water polo’. Our girls did a really good job in the second half of going ‘don’t scoreboard watch, just go play the opponent’,” Coach Rond said.
Although the Regals were able to round up some points, the game was a tough battle.
“It’s definitely a good challenge because it’s fun to see what we can come up with and how we can handle that type of pressure, on defense and offense, from teams at that level,” sophomore center Lexi Rond said.
The team hopes to use what they learned from today’s match-up in an effort to keep their number one spot.
“They’re really talented, but it helps us for the rest of our season, if we play like we did against them and we can hang with them, then it makes it easier to play against teams in the same conference,” sophomore utility player Kaitlin Gardhouse said.
The Regals were not shy in their offensive play with 21 shots on goal, only a few less shots on goal than Indiana. Lexi Rond and senior center Victoria Rose Meek led the team in shots on goal, with 7 and 4 shots respectively.
Lexi Rond helped the team tremendously, scoring 5 of the 7 goals.
On defense, first-year goalkeeper Taryn Sato fought hard, playing the full 32 minutes. Junior attacker Kemi Dijkstra had 3 steals from Indiana to turnover possession to Cal Lutheran.
“We lost five kids [during] graduation last year, so we have newcomers to the program, and were learning how to play together. Our girls did a really good job of doing that,” Coach Rond said.
The Tina Finali Memorial Tournament was once known as the California Lutheran Invitational. In 2015, they changed the name to honor mother of alum Christina Messer (’12), Tina Finali, who passed away from cancer in the fall of 2015.
Many teams at different levels of the National Collegiate Athletic Association and National Association of Intercollegiate Athletics come together to compete with Cal Lutheran who hosts the event.
“I think it’s really fun because we get to play against some of the highest-level teams out there and it’s such a good learning experience and brings us a lot closer as a team,” Lexi Rond said.
The team will see various opponents as they continue through the tournament this weekend.
“We’ve got a couple more really tough teams to play so I think we have to keep building off of our game plan,” Guardhouse said.
The Regals are now 5-3 overall and are headed to Indiana to compete against McKendree University and Indiana University on Saturday, March 7.