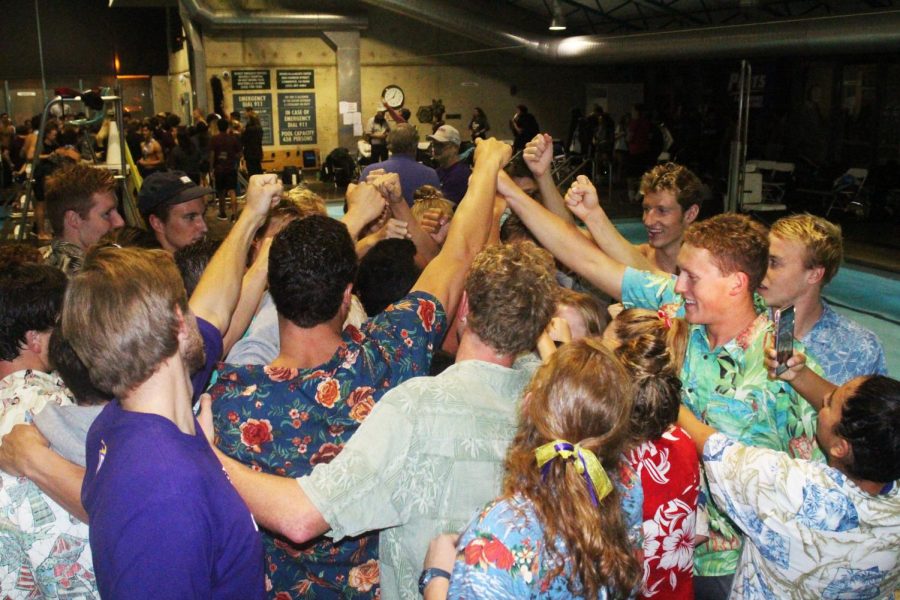 The team, decked out in their Hawaiian shirts, gets in one last cheer at the end of the 4-day SCIAC Championships.

The California Lutheran University Swim and Dive team competed in the Southern California Intercollegiate Athletic Conference Championships during the weekend of Feb. 21, taking home titles, rankings and personal records.
“It was part of the goal. We train all year and the whole idea is to try to peak at our championships, so it was something that we were working towards,” sophomore Luke Rodarte said.
The Regals Swim and Dive team came in seventh of nine competing schools, earning 253.50 points, putting them ahead of California Institute of Technology and University of La Verne.
Senior Emily Glass became a Cal Lutheran record-holder in her last race of her collegiate career in the 200-yard breaststroke. Her time of 2:25.15 beat the previous record of 14 years.
“I was kind of in shock. Right now, I don’t even remember the race. But then I got out and five of my teammates were at the end of my lane and we all hugged and cheered,” Glass said.
The four-day event had preliminaries in the morning and the top 18 of each event competed in the finals later that day.
“In the morning I was .5 seconds away from breaking the record, but I just had to get my mind right to come back at night and do it again, and then I dropped over a second more and I got it,” Glass said.
Emily Sharpe and McKenzie Kelly were also big competitors, each earning seven points for their team by placing 12th in the 1,650-yard freestyle and 200-yard butterfly, respectively.
The Kingsmen Swim and Dive team finished third with a total of 629 points, behind Pomona-Pitzer Colleges and Claremont-Mudd-Scripps Colleges. This was their highest placement since 2017.
Senior Ben Brewer came in first in the 1,650-yard freestyle, earning 22 points. His time of 15:29.53 broke the school record for this event. Brewer’s time qualified for nationals and he will represent Cal Lutheran at the 2020 National Collegiate Athletic Association Division III Men’s Swimming and Diving Championships.
Rodarte beat two school records in the 100-yard and 200-yard breaststrokes. He earned first place in the 200-yard breaststroke, with a Cal Lutheran record-breaking time of 2:01.45. Not only was this a program record, but this time ranks him fourth in the nation for this event at the NCAA Division III level.
Rodarte has a unique background compared to his teammates, as he didn’t swim in high school.
“I do have a background in swimming, I just haven’t done it for about 7 years, and so I saw the times and knew I had to practice swimming faster,” Rodarte said.
Rodarte will also represent Cal Lutheran in the NCAA Division III Championships.
Junior AJ Nybo earned SCIAC Swimmer of the Year for his 2020 swim season. He swam a 1:47.49 in the 200-yard butterfly, breaking his own school record.
“I had a lot of support from everybody else and it’s easy to do that when you’re going to nine or ten practices every week. I think it was partially luck and a lot of hard work,” Nybo said.
Nybo will join Brewer and Rodarte in the NCAA Division III Championships.
“I really just want the team to keep growing, and hopefully having 3 guys going to nationals this year is going to propel our team forward a bit more,” Nybo said.
The three Kingsmen will compete March 18-21 and will enter into the championships ranked as #22 in the nation by the College Swimming & Diving Coaches Association of America.