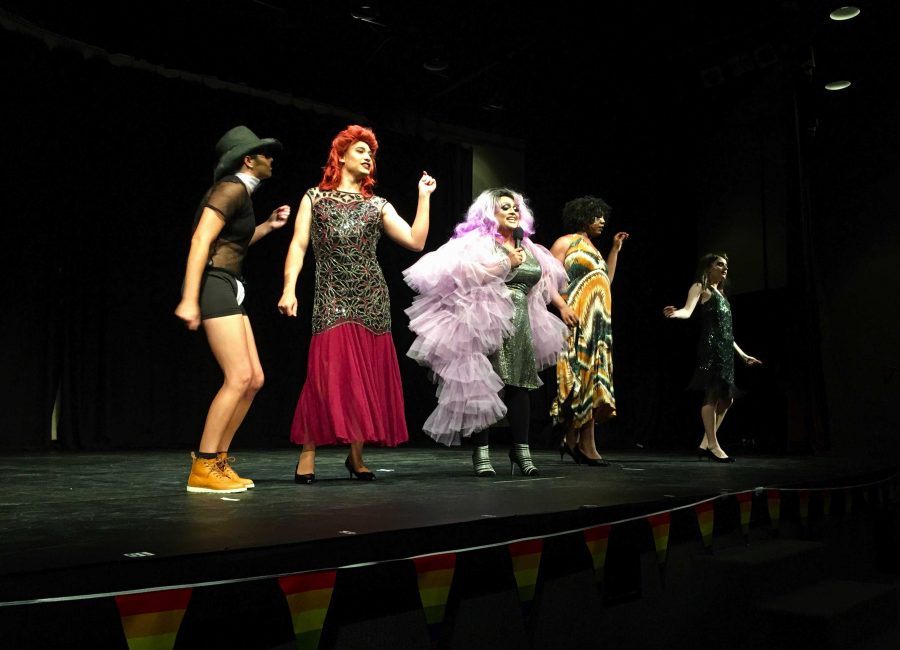 California Lutheran University PRIDE Club brought students together at the Preus-Brandt Forum Friday night, March 6 to start off the weekend with the annual Drag show.

“Drag is just a way for people to express themselves in ways that people might not be able to under normal traditions and it’s just a fun time to watch people dress up in fun costumes and fun makeup,” senior Sofia “Nat” Katsiouleris said.

Katsiouleris, who goes by they/them pronouns, was in charge of this year’s event with the help of senior Sofia Herrera, vice president of PRIDE Club.

Katsiouleris said they are a coordinator of the event and makes sure everyone else is doing their job, which includes enlisting drag performers, ordering decorations for rehearsals and the actual show. Katsiouleris added that they start planning the show at the start of the spring semester once they have their budget laid out for the club.

“I think we have around five to six people that signed up to be this year’s drag performers,” Katsiouleris said. “We have less people in this year’s drag show compared to last year’s because three of our performers last year were seniors and one was an alumni who happened to be in the area at the time, so we just got lucky.”

Junior Nestor Vazquez said he participated as a drag queen that went by the name “Leg Fracture,” in this year’s drag show. Vazquez said this was his first time performing in a drag show and that he got the inspiration for his name from getting an actual leg fracture last week from a skating incident.

“I didn’t really have a hard time preparing for the drag show. Honestly, I just walked into Macy’s and came up to one of the ladies working there and asked for her advice,” Vazquez said. “I told her I was participating in a drag show and she was super nice and understanding about it so she helped me pick out this dress that was only $10 and I thought it was a steal.”

Vazquez said he would consider performing in next year’s drag show because he thought it was fun, but mentioned that he won’t be performing as “Leg Fracture” since he said he wants to keep it fresh and become more creative.

“This year’s drag show was really fun. I was kind of sad that I didn’t get any money when I walked into the crowd [during audience participation]. I’m still bitter about that though,” Vazquez said.

Senior Cameron Love was one of several students in the crowd that attended this year’s drag show. Love said this was the first and last drag show he’s been to at Cal Lutheran and really enjoyed watching everyone perform their own unique songs on stage.

“My favorite part of the show was definitely the Sisters when they played Crucifix,” Love said.

Love said that he heard about the event from the host, Nicole Reiner, and attended in support of her with his friends.

“Overall, it was a really good time. If anyone is thinking about participating in the drag show in the future, I’m sure they’ll be glad to have more performers,” Love said.