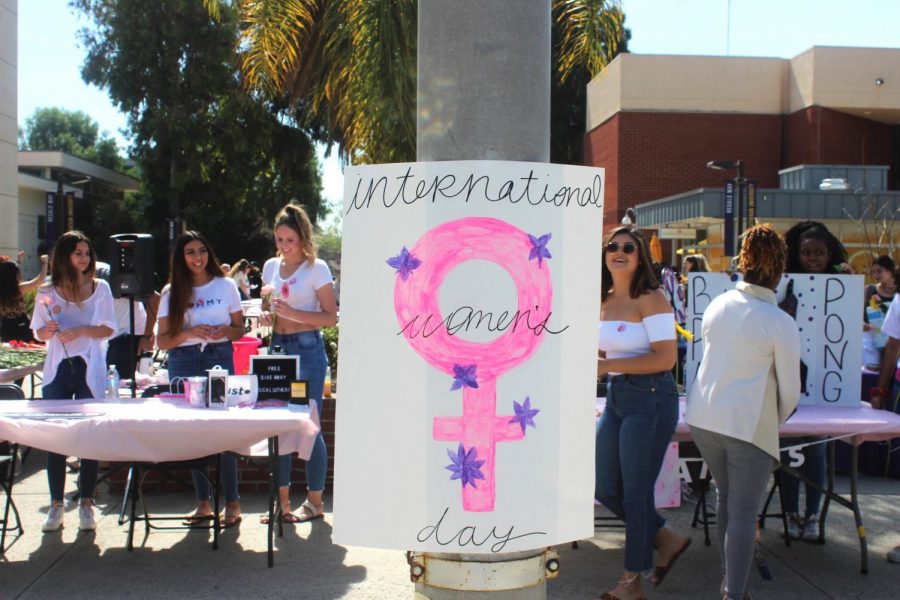 Her Campus at California Lutheran University organized their fourth annual International Women’s Day event on Thursday, March 5 with over 30 clubs including the Dance Team, Delight, Pre-Law Society, Muslim Students Alliance, Club Teach and others participating in the celebration.

The event included activities, treats, stickers and information about women in specific work-forces, resources available to women and overall striving to acknowledge and empower women. The event took place on the Spine, the central walkway on campus.

“Having everyone come together and celebrate women in general and making sure a woman feels comfortable and appreciated is important,” senior Julianna Melvin, the marketing and publicity director of Her Campus said. Melvin helped  organize the International Wo-men’s Day event.

Her Campus is an online magazine written by female students, with the purpose of promoting empowerment and connection. The Her Campus team at Cal Lutheran has 45 members.

“Her Campus is an online magazine written by college students, for college students. We do social media, write articles online and share what we think,” Melvin said. “At the very base, we are a sisterhood and really work on making sure [we] have familiar faces on campus.”

Francheska Cal, a senior at Cal Lutheran and the president of Her Campus, also helped organize the event.

“This is our fourth year doing this. This year we have 30 clubs and offices here to celebrate women,” Cal said. “As women, we get judged here on campus sometimes by other students, so we like the idea of spreading awareness and information. It’s not just for women.”

The Muslim Students Alliance Club took part in the International Women’s Day celebration. At their booth, they gave out flowers to students, had information regarding hijabs and allowed students to try on different styles and different ways of wearing a hijab.

“We are educating people, non- Muslims as well as Muslims, the benefit and why Muslim people wear [a hijab], and want to encourage women of all religions and non-religious backgrounds to try on the experience of hijabs,” Sana Shah, the president of Muslim Students Alliance, said.

“Some people think of it as intimidating, and the fact is, we actually put it on and it’s liberating. I only allow people to see what I want them to see, so in that sense, I feel that sense of freedom, that it is fully my choice,” Shah said.

Club Teach was also among the clubs who participated in the event.

The purpose of using the month of March to celebrate women is to “increase consciousness and knowledge of women’s history, and to remember the contributions of notable and ordinary women, in hopes that the day will soon come when it’s impossible to teach or learn history without remembering these contributions,” according to thoughtco.com.

The event not only had activities and treats, but served as an educational opportunity for the students of Cal Lutheran.

“This event is important to raise awareness about women, empower women and educate people about certain statistics internationally and nationally,” Shenavai said.