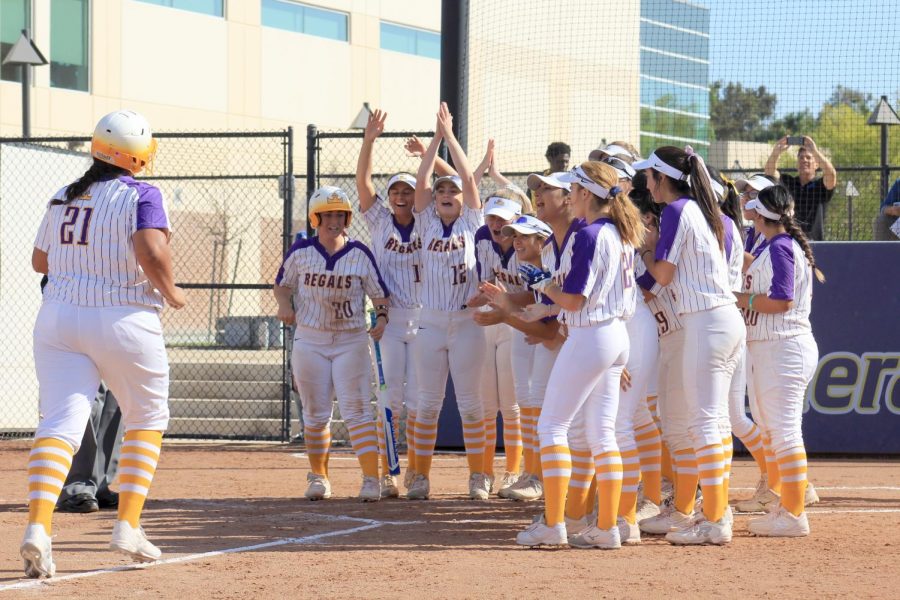 First-year Ariana Mendoza (#21) runs to her team as they cheer her on after hitting a home run.

Despite being a new addition to the 2020 Regals Softball team, first-year Ariana Mendoza has made quite an impression, working her way to being a top player.
In just her first weekend playing at Cal Lutheran, she earned the Southern California Intercollegiate Athletic Conference Player of the Week.
With three home runs under her belt, she holds the lead in home runs for her entire team. This number also makes her tied for the lead in home runs in SCIAC. She also leads her team with 9 RBIs.

Not only has she made an impact statistically, but overall on her team.
“She is such a lighthearted and fun person to be around. She never complains and is always focused on getting better. Our whole team loves her,” senior pitcher Sierra Scali said in an email interview.
Mendoza came to California Lutheran University with a strong background in softball, playing all four years of high school on varsity and earning offensive player of the year during her senior season.
Mendoza began competing when she was just six years old. She played travel ball when she was just nine years old.
The encouragement from her family pushed and molded her into the player she is today.
“My dad has always coached me since I was a little girl and has always pushed me to my full potential,” Mendoza said in an email interview.
Mendoza’s decision to continue her softball career at the collegiate level at Cal Lutheran was an easy choice. Not only did she have passion for the game itself, but the program was just what she was looking for.
“I chose Cal Lu because of the coaching staff. Coach Debby Day was super welcoming and her players expressed how caring she is and looks after all her players like her own kids,” Mendoza said.
Hutton Field is also close to her home, so it makes it easy for her family to come up to watch and support, as they have done her whole life.
Mendoza has proven herself to be a tough contender, as she holds a starting position as catcher and designated hitter. It’s rare for a first-year to be in the starting lineup, but Mendoza has earned it.
“My dad has taught me to always work hard to be in the starting line up,” Mendoza said.
Although the season was cut short due to the outbreak of COVID-19, Mendoza enjoyed every second of it.
“I love everything about our program, from our coaching staff, to our weights and conditioning coach Sam, and to all twenty-four of my teammates that have become like sisters to me,” Mendoza said.
Her first season at Cal Lutheran was certainly one for the books, and she looks forward to next season in hopes to improve as a player and maybe even get a spot in the Cal Lutheran book of records.