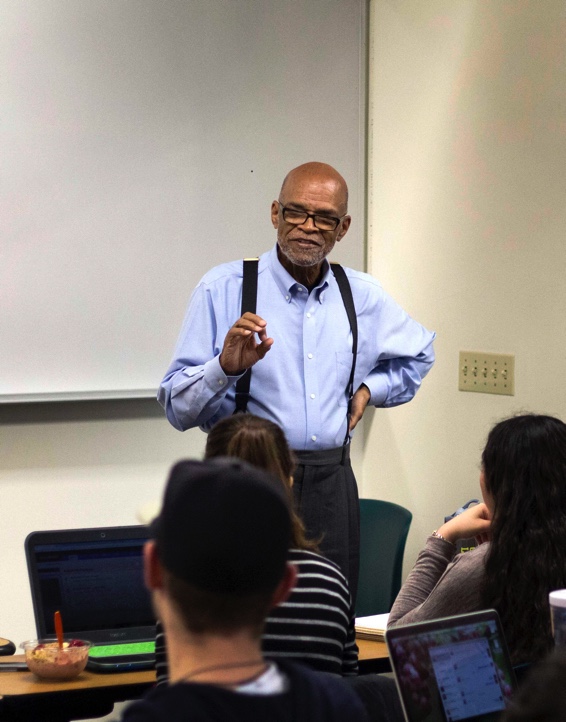 Associate Dean of Inclusion and Research/Creative Works, the Director of the Global Studies Program and Political Science professor at California Lutheran University Gregory Freeland was named one of “California’s Top 100 Black Leaders for School and Communities” by Californians for Justice in February.

“It felt really good [to be named as a top black leader], and it is an inspiration to keep on pushing. I have long been an advocate of community building and I know that an educated population is an important part of community building and health,” Freeland said. “However, I know there are thousands more out there working to strengthen their communities and they may be recognized someday in some way, too.”

Freeland was among one of the very first faculty members of color when he started working at Cal Lutheran. Since then, he has served on the President’s Diversity Council, Student Life Committee and Honors Committee. He is also president of the Central Coast Alliance United for a Sustainable Economy Board.

Freeland said he started his journey teaching diversity and inclusion after he began to realize that all are equally entitled to liberty and justice, but some were prevented from this entitlement.

“These observations span a childhood in North Carolina, an Army stint in South Korea, graduate school at UCSB, and as a professor at CLU,” Freeland said.

Freeland has continuously worked to encourage diversity during his time at Cal Lutheran, professor and Director of the Global Studies Program Russell Stockard said.

“Dr. Freeland and I share a number of experiences in common. We are both from the South and were born about the same time. I’m from Nashville, Tennessee and he’s from Durham, North Carolina,” Stockard said. “We both experienced and participated in the Civil Rights movement as both of our hometowns were epicenters in the struggle. Since we both bring these experiences to our professional lives, we work extremely well together. I admire his leadership and wisdom.”

Professor of Political Science Haco Hoang, who also works closely with Freeland, said Freeland is an underrated and humble scholar.

In April 2017, Freeland received a Lifetime Achievement Award from CAUSE in recognition of outstanding and invaluable service to the community.

“Dr. Freeland has been instrumental in implementing diversity in committee service, coordinating the Ethnic Studies Minor, and directing Global Studies. I believe he was one of the first, if not the first, director of the Center for Equity and Justice,” Stockard said. “So when he assumed the Associate Dean position, it was a natural progression of work he has done here at Cal Lutheran along with the outside involvement with the Central Coast Alliance United for a Sustainable Economy.”

Freeland said he aims to utilize his diverse experiences as a professor and global citizen to  enhance learning outcomes for students. Freeland said Cal Lutheran should offer more classes across disciplines like black history, Latinx art and ethnic studies classes.

“Since the purpose of CLU education – in the widest and best sense – is a strong commitment to training students in the arts of citizenship, collective coexistence should be at the core of becoming more diverse,” Freeland said. “Students need to be listened to when they voice dissatisfaction and [ask for] proper responses from policy makers.”