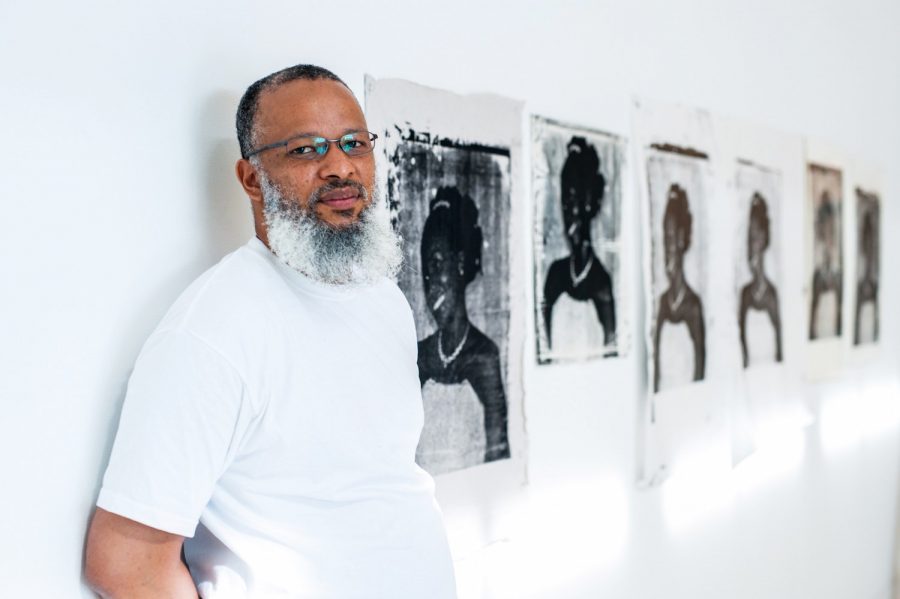 Meleko Mokgosi’s “Acts of Resistance,” a collection of black figures engaging in ‘formal and informal’ acts of resistance depicted through drawings and paintings,  will be on display at the William Rolland Art Center until April 9.

Mokgosi is most notably known for creating artwork that reflects the culture of African American  people and symbols, through accurate historical representation that some art purveyors may not have previously encountered.

Curator of Collections and Exhibitions Rachel Schmid said she believes the “Acts of Resistance” lecture by Mokgosi himself, which was postponed until March 31, will provide a continuation of the art workshop “Museums Are Not Neutral.” Schmid said this supplementary lecture opportunity, which coincides with Mokgosi’s artwork, will help gather the Thousand Oaks community and help them better comprehend the lack of factual representation within the historical background of certain underrepresented  ethnic and racial groups in museums.

“One of the main reasons why I wanted to bring him  here was because even though he is  talking about countries in the Southern region of Africa… I thought there were so  many images that were very relevant to the African Americans experience in the U.S.,” Schmid said. “We still have a division between socioeconomic backgrounds for African Americans versu White Americans.”

Schmid, who said her focus is to increase awareness on campus, could not help but acknowledge that the artwork trying to educate the lack of minority representation also came at a perfect time as Cal Lutheran addressed incidents of racism on campus.

Schmid also said she found a drawing of a nude woman particularly interesting in Mokgosi’s more defined context.  Schmid added that Mokgosi’s  representation  of older females in Southern African Culture is accurate to their perception as bothersome, which during the time resulted in poor pay for their work. Schmid, said this art parallels the birth of the U.S., through slavery.

Kamiki Soulyalangsy, a student at Cal Lutheran, said both her knowledge  and appreciation of art and understanding of the importance of the accurate  representation of culture helped her recognize the significance of this showcase.

“I believe it is important to recognize people and their true culture because  it removes stereotypical connotations about a  group of people,” Soulyalangsy said. “By depicting real people in their everyday lives they are removing a personal bias from painting and recreation reality. From a historical standpoint, by keeping this artwork we are preserving culture for students many years from now.”

Genesis Reyes, a Cal Lutheran student, said her lack of art knowledge did not prevent her from admiring and learning about others’ cultural and historical experiences.

Reyes explained that she wanted to see a better representation of culture on campus where students can learn to contribute with one another.

“You can create social change with artwork,” Reyes said. “You learn more about [someone’s] inner being by seeing how  they reflect the culture and heritage within their work. Learning from their background also helps us learn more about the history we don’t hear much of.”