T.O. Civic Arts Plaza gets facelift in part of new vision for downtown 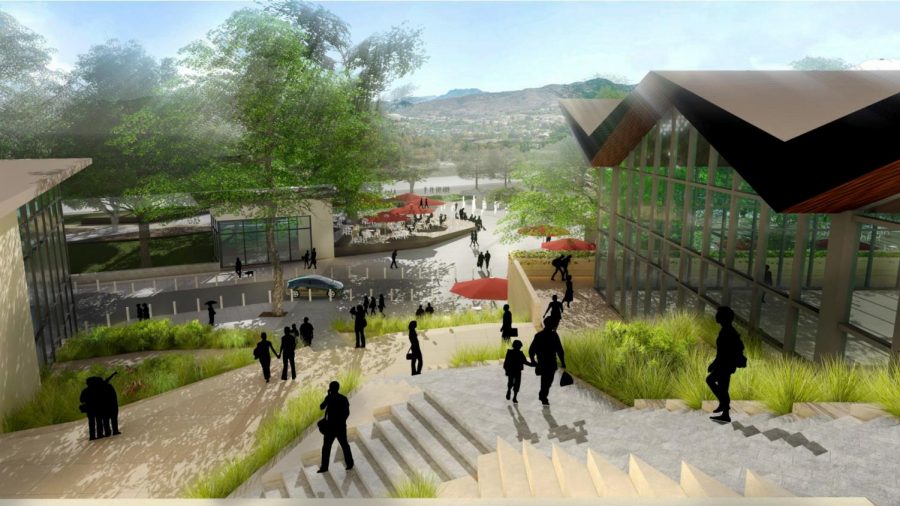 The Civic Arts Plaza is being redesigned—adding more pedestrian walkways between prominent buildings, increasing space to showcase cultural and art events, reconfiguring City Hall to increase accessibility and creating a town hall space for the community to gather—as part of an overall plan striving to revitalize and improve the connectivity in the downtown area of Thousand Oaks.

Mayor Pro Tem Claudia Bill-de la Pena said the latest Thousand Oaks City Council vote to continue the proposed design concepts was “well received, and we are now in the middle of the process.” Renders have been drawn up and approved recently by both the council and the public, and the next step would be putting these new concepts into place and starting construction.

On Jan. 8, the city council, staff and Downtown Revitalization Ad-Hoc Committee awarded a contract, not to exceed $1.4 million, to Los Angeles-based company AECOM to consult on and provide ideas for the redesign and other involved projects. Throughout the month of February, the council has met and voted on suggested designs to move into practical implementation of the redesign.

AECOM has documented and digitally modeled the area and created an assessment of what could be done and what cannot, then developed design concepts and options based on these restrictions and possibilities.

After presenting the options, the council chose the “main street concept,” which was then presented to the public, who approved it. The main features are a staircase from Thousand Oaks Boulevard to the Kavli Theater, adding art and showcase space for the Kavli and Scherr Theaters and adding access—both pedestrian and vehicular—to City Hall to increase its utility.

The revitalization project including the Civic Arts Plaza is part of the larger Downtown Core Master Plan, which Pena said, is an important priority for the city council.

The overall DCMP, as stated on the City of Thousand Oaks website, strives to create a  “more active and connected… entertainment and commercial destination and improve walkability and the pedestrian environment,” in Thousand Oaks.

Pena said the council’s goal is to make the downtown area more supportive of community gathering by making it more pedestrian friendly.

Currently, a mixed use construction site is being built which will include commercial space, public space and 142 apartments DCMP project is underway, just down the street from the Civic Arts Plaza. This specific redesign intends to promote the Civic Arts Plaza area as a “town square.”

The Civic Arts Plaza itself includes the Kavli and Scherr Theaters, City Hall and a large parking structure. The overall downtown area includes the surrounding areas such as the Lakes, a small dining and shopping center, other sporadically placed local restaurants, businesses and attractions.

The official DCMP report explains that the main goal when redesigning the Civic Arts Plaza area is to change the front part to better connect it to its surroundings and “expand its potential as an outdoor destination.”

Today, many people visit the theaters or City Hall for one activity or errand, then leave, Pena said. Ideally they would visit, possibly go to a restaurant or browse the adjacent businesses and then do whatever they originally intended, she added. The intent of this redesign is to make the area a destination in and of itself, with the theaters being one of multiple reasons to visit and spend time there.

The Civic Arts Plaza redesign is the first step being taken in the DCMP, and has been underway for months.

“I really like the idea of a town hall where we can hang out, and anything that makes the theaters more accessible would be cool, I don’t think people notice them as much as they should,” Alexander Simun, a local resident who has performed in the Kavli Theater and regularly spends time at the Civic Arts Plaza, said. “It would be a lot more accessible if there was a connection between the theaters and the Lakes or the other stuff around there, so if these plans end up happening I think it’ll work out great.”

The Downtown Core Master Plan and the renders can be viewed at toaks.org under the heading Campus Master Plan, and City Council meetings are open to the public for comment.