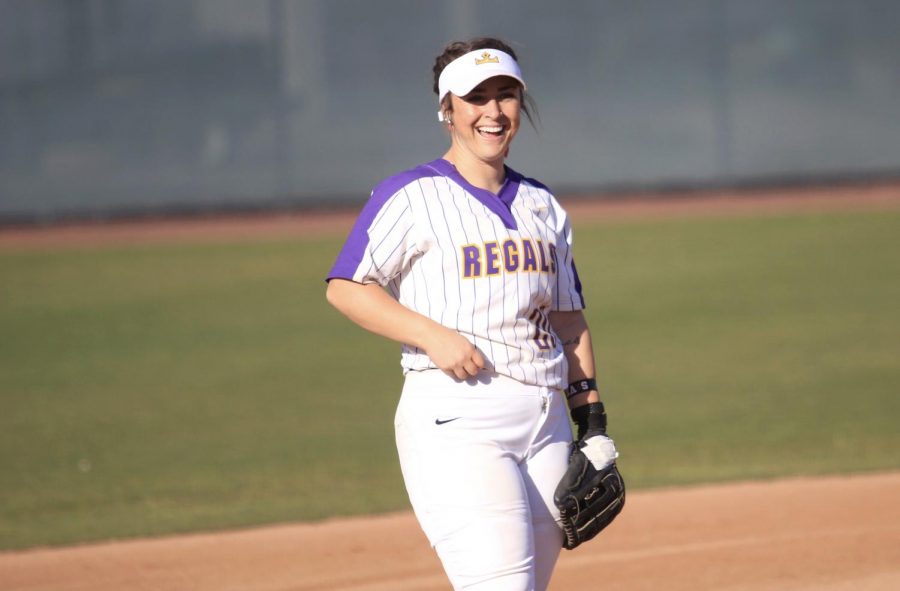 Cal Lutheran Athletics is hopeful for a spring season despite recent lay offs and furloughs of department employees and statewide COVID-19 regulations.

When California Lutheran University canceled all spring sports in respect to the National Collegiate Athletic Association COVID-19 mandate, all student-athletes, including softball, experienced a premature end to their season.

“We are all obviously devastated about the abrupt end to the season,” Head Coach Debby Day said. “However, the health and wellness of our players, our families, our community and our world is much more important than softball games.”

The Regals’ softball team ended with a 5-7 record overall and 2-4 in the Southern California Intercollegiate Athletic Conference.

Only playing 12 of the scheduled 31 games, Day said “our season really never got underway as it should have…we really were not able to get in full swing.”

In their first four games against the University of Antelope Valley, the Regals went 2-2, and in conference play, 1-2 against both Pomona-Pitzer and La Verne University.

“I am very proud of how we played this year. We won more games in February than we did last year [overall],” senior infielder Kendall Marinesi said.

During their stinted season, they garnered 55 runs, 5 home runs and a batting average of 0.321.

Sophomore infielder and outfielder Mia Onesto earned 9 of the team’s runs, while first-year infielder Ariana Mendoza got 3 of the team’s 5 home runs. Additionally, Marinesi and senior infielder Celeste Ekman each had a home run this season.

“We were on a bit of a roll in conference, we weren’t getting swept and winning one or two games in the series,” Marinesi said.

“This season was headed in the right direction because of the strong team chemistry we all had with each other,” senior outfielder Lauren Salvati said in an email interview. “I have never been on such a tight knit team with girls who will always have my back. We were all very invested in making it to the postseason this year.”

The NCAA announced last week that they are granting all spring athletes an extra year of eligibility, but it is likely that most of this year’s seniors are done with collegiate sports.

“I think we’re all pretty much accepting the fact that we are done,” Marinesi said. “I appreciate that the NCAA has granted us an extra year, but we have been preparing for our life outside of college and that doesn’t include softball.”

Despite the short season, the chemistry and pride the team has is undeniable.

“I’m super proud of how we all came together this year. I’ll always remember this group of girls as my family,” Salvati said. “The coaches this year did an amazing job with getting us ready this season. They were pushing us to our full potential and made us all better players and people.”

The end of the season is devastating for most spring athletes, especially seniors who find themselves at an abrupt end of their collegiate careers.

“Our careers are suddenly ended and we have no say. We were kind of mentally preparing for senior night at the end of the season to be our last time together and it was cut short,” Marinesi said.

However, seniors who have been a part of the Regals’ softball team for four years have seen more growth and transformation within themselves than just in the game itself.

“I cannot express enough how thankful, grateful, blessed I am to be a part of something that has truly transformed me,” Marinesi said.

The Regals’ softball team will be back next spring season stronger and ready to compete.

“This group was the toughest, most resilient, most passionate and most team-committed group I’ve ever coached,” Day said.  “I am tremendously proud of them.”