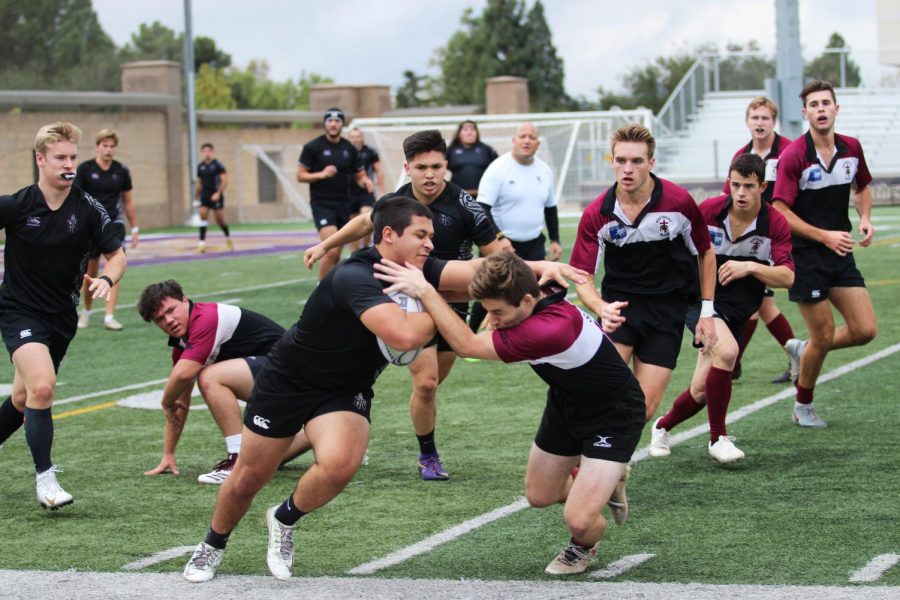 Knights player Andres Hooper tries to escape the Westmont defenders to put the Knights on the board.

The California Lutheran University Knights club Rugby team ended their season with an undefeated record of 6-0 after coming to an abrupt end, along with the rest of Cal Lutheran’s remaining sport seasons, due to COVID-19.

The Knights’ regular league season of 2020 started on Jan. 26, hosting the Westmont Warriors for their first league game, where they won 55-21.

“We were plagued by injury… we weren’t sure if we were going to have enough healthy guys to play the match, but we scraped together a team with only one substitute… went down 21 points in the first half but came back to win the game,” Owen Lusztig, a senior and second year member of the team said in an email interview. “Everyone played with an incredible amount of heart and tenacity. It was definitely a match I won’t forget.”

The Knights took double-digit leads in many of their games, boasting a score of 87-12 over the University of California, Riverside Highlanders and holding California State University, Fullerton at only 2 points in their March 7 matchup which ended 26-2.

The Knights had some nail-biters, as they championed Westmont in March scoring a close 45-38, and  Feb. 15 when they beat Pepperdine in a single digit lead, 34-26.

“[Pepperdine] had possession for the majority of the game so we were exhausted and beat up toward the end of the game,” junior Sam Balentine said in an email interview. “However, after Andres Hooper had given us all an inspiring talk following us being scored against, we kicked things into gear, started making better tackles and rallied for the close win. It was a moment where we knew it was going to physically hurt to get the win, but we were all willing to lay it down for each other.”

The final two games of league, away against UC Riverside, scheduled for March 28, and home against Pepperdine, scheduled for April 18, were canceled due to concerns surrounding the spread of COVID-19, as announced by Cal Lutheran on March 12.

The Cal Lutheran Knights ended their regular season undefeated, with a record of 6-0.

“We had a great group of guys who were all keen to learn the game and to compete,” Lusztig said. “It started out not looking too good in terms of how many players we had, but once we got that sorted it made every win more satisfying knowing the hard work we put in to get where we were.”

The Knights were coached by Allan Knox, an assistant professor in the Exercise Science department at Cal Lutheran.

“We had the opportunity and privilege to have him donate an incredible amount of time and effort to share his knowledge of the game with us and serve as our coach. Without him there is no way we would have the success we did,” Lusztig said.

In addition to Knox’s contribution, Balentine credits the success of their undefeated season to his fellow teammates.

“I would attribute our success to our desire to win and our ability to trust each other. We weren’t just a team that would meet for practice and then see each other at the game,” Balentine said.

Hearing the news that the season would no longer continue was a difficult circumstance for the entire team.

“It is a bummer that our season ended abruptly, but I enjoyed every second we shared on the field. The season was chock full of highlights and memories that I will always remember,” Balentine said. “Sports will always be there, but for me, the connection we all made was more important than any win that we added to the record. I will be looking forward to next season and how we will adjust to a new team.”

This news was even more difficult for seniors who played in their last game without even knowing it.

“I was crushed by it,” Lusztig said. “We would have loved the chance to play our last two games and hopefully finish out the season undefeated. I will say though, I couldn’t ask for a better group of guys to play my last game with, and I can’t wait to see what the boys can do with this club moving forward.”

The Cal Lutheran Knights will aim to continue their undefeated record when their new season starts at the end of 2020.