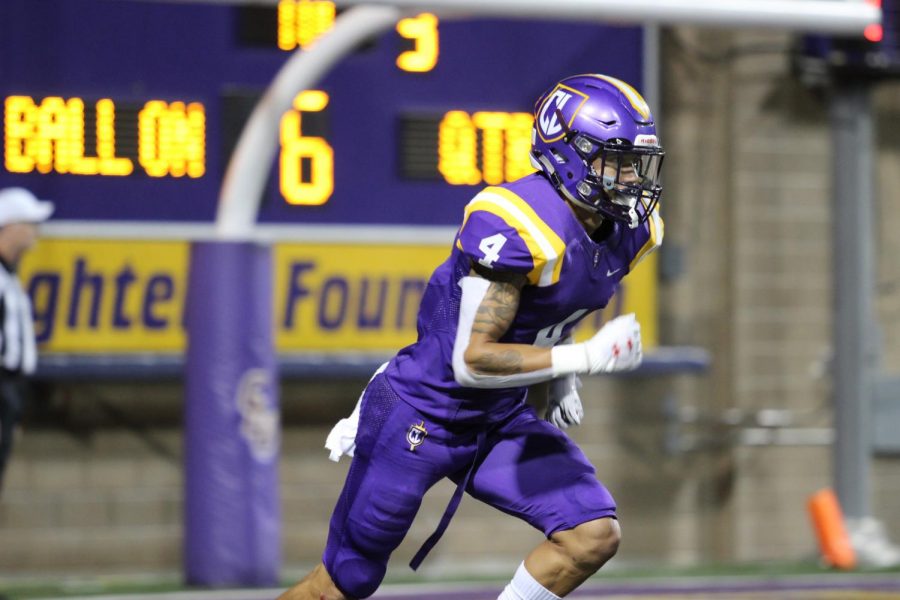 Junior wide receiver James Holland runs to prepare for a catch against Pacific University on Sept. 21.

The 2019 California Lutheran University Kingsmen football team finished 5-5 overall and  4-3 in conference play, placing the team at No. 4 in the Southern California Intercollegiate Athletic Conference.

The Kingsmen have 18 positions that need to be filled for the 2020 season.

“The number one need for us is cornerback. From there, I’d say that running back and tight end will be our next biggest holes to fill,” Head Coach Ben McEnroe said. “I am very excited about our offensive and defensive lines over the next 3 to 4 years. We have a chance to be elite on both lines and when you have that, you have a chance to be pretty good.”

Since the Kingsmen are losing many seniors, the coaching staff is working to garner recruits for the upcoming season.

“Our top criteria for evaluating a potential player is ‘does he make plays?’ It’s that simple for us,” McEnroe said. “From there, we evaluate his academic accomplishments, speak with coaches, then develop a relationship with the prospect and his family.”

The social-distancing practices implemented in response to COVID-19 are making spring workouts nearly impossible during this offseason.

“At this point in time, I’m just looking forward to being with our team again. We were playing our best football at the end of 2019, and our off-season was going great before the COVID-19 hit and everything was shut down,” McEnroe said. “Training camp can’t get here soon enough for me. I love this team and I love hanging out with the players and coaches.”

After their overall 5-5 record this past season, the Kingsmen have their eyes set on a new goal for this season.

“We’ve had the same end goal in every one of my 13 seasons; to be the SCIAC champions, which also means a birth in the NCAA playoffs,” McEnroe said. “We will be young again next season, but the chemistry and talent are outstanding.”

Along with being the head coach, McEnroe is also the offensive line coach. He is excited for the season ahead and shares a message for the team.

“Keep growing. We’ve put-in a lot of work, both on the physical side and in the overall development of this team,” McEnroe said. “Life presents us with a lot of challenges, so we need to have the ability to deal with those and to thrive in the chaos.”