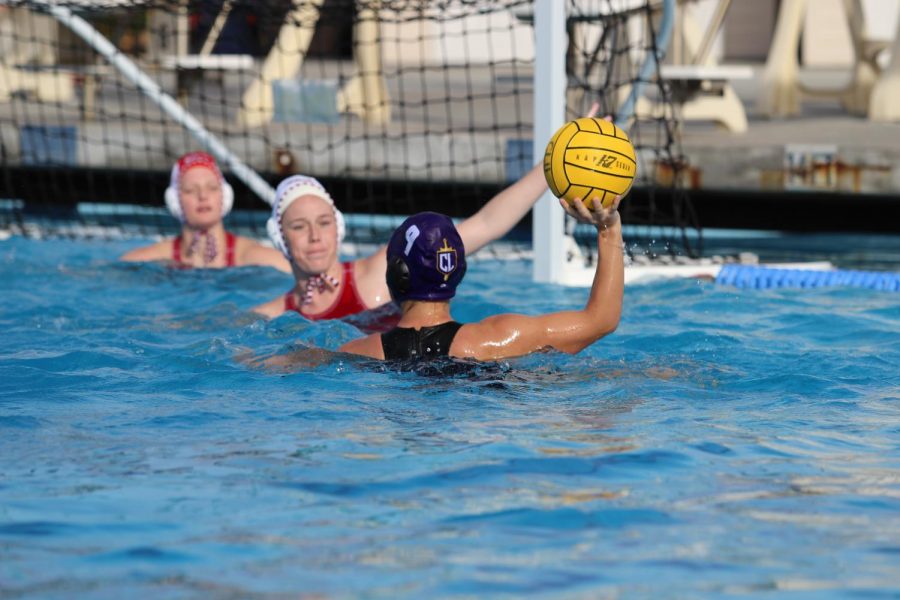 Senior attacker Mackenzie Thomas looks to make an offensive advance towards the goal against Division I opponent Indiana University.

Seniors Victoria Rose Meek, Christin Hirn and Mackenzie Thomas led the Regals water polo team to another successful season, ending with a No. 1 ranking before their season was cut short due to COVID-19.

The Regals ended their season 8-4 overall, competing against Division I, II and III institutions. They looked to defend their Southern California Intercollegiate Athletic Conference title, and ended with an undefeated 2-0 record in conference play.

Meek, Hirn and Thomas were a part of the team that won the SCIAC championship in 2019, and went on to participate in the NCAA National Championship Tournament, alongside Division I, II and III schools.

“Mackenzie [Thomas] and Victoria Rose [Meek] are both very talented and dedicated players who have a passion for water polo that has been so evident over the last 4 years,” Hirn said in an email interview. “They have contributed so much to Regals water polo, and I am so thankful to have been able to be their classmate and teammate.”

Meek was a four-year member of Regals water polo as a center. In 2018, she was named Second Team All SCIAC, First-Team All America and Academic All District. In 2019, she was named All American Honorable Mention and Academic All District. She also is a part of the California Lutheran University Scholar Athlete Society. Meek ended her career with 104 goals, 19 assists, 59 steals, 184 drawn ejections and two field blocks.

“Victoria Rose [Meek] is a very strong and gifted player in the pool. She truly made the most out of her college and water polo experience even when faced with adversity. She has been inspirational and an amazing set player in the pool,” Thomas said in an email interview.

Hirn played as an attacker during her four-year career with the Regals. She is also a member of the Scholar Athlete Society. In her 97 games and 69 starts, Hirn had a total of 79 goals, 39 assists, 74 steals, 36 drawn ejections and 20 field blocks.

“Christin [Hirn] as a player was fierce and one of the most competitive players in our division. She made sure to always give 100% in the pool and truly made a difference in our offense,” Thomas said.

Thomas, an attacker for the Regals, played four years as a Regal and was also a part of the Cal Lutheran Scholar Athlete Society. Thomas ended her career with 50 goals, 40 assists, 88 steals, 31 drawn ejections and 13 field blocks.

The full duration of all spring collegiate sports was cut short in a response to the COVID-19  pandemic.

“I was very bummed at first just like many other athletes because I really wanted to see this season play out,” Thomas said. “I do believe this team was set to win a national title, however I was just very grateful that I was able to play the few games I had with this group of girls.”

The three seniors on the team ultimately had their final season taken away.

“That news was really heartbreaking,” Meek said. “We put so much work in just to have it taken away. No senior day, no senior experience, it’s such a shame.”

After their SCIAC Championship last year and NCAA tournament appearance, the Regals were set to appear in the first ever NCAA Division III water polo championship tournament.

“Our team worked so incredibly hard this last year preparing for SCIAC and the D3 National Championships. We were number 1 on the polls to win and I believe we would have with all my heart,” Hirn said.

The seniors of Regals water polo are grateful for their four years at Cal Lutheran, both in and out of the pool.

“I have made lifelong memories and my closest friends playing for Regals water polo and I am so incredibly thankful,” Hirn said.

Thomas credits the success of the team to the family aspect and culture.

“No matter what, I always have a team who has my back. It was a team that was very giving and generous towards one another. I truly believe that the Regals water polo team finds success due to the family like structure we have,” Thomas said.

Meek also acknowledges the success of the water polo team due to their close bonds.

“We grow up together, go through trials and tribulations together. Everyone has a high level of respect everyone has for one another,” Meek said. “It is a family and sisterhood.”