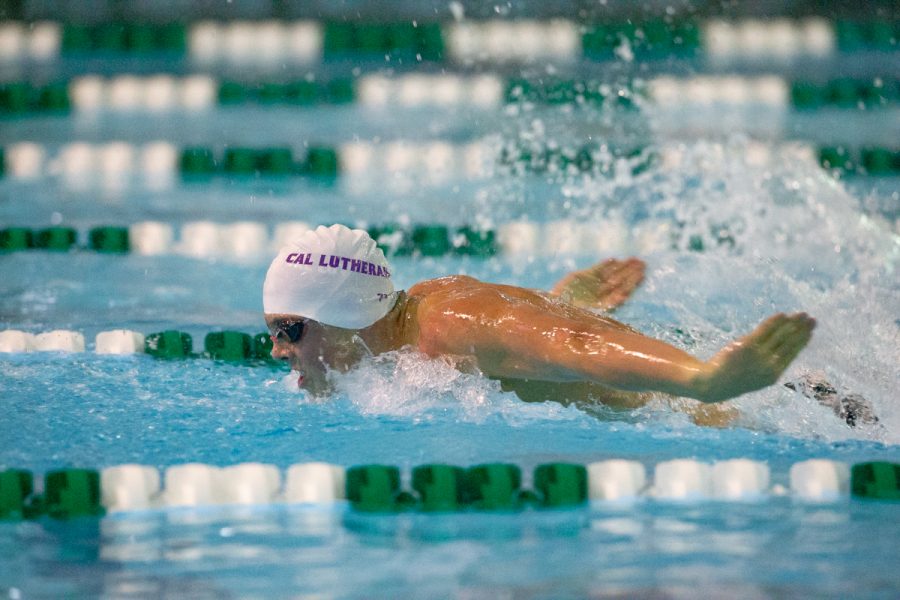 Junior SCIAC Swimmer of the Year AJ Nybo swims the butterfly stroke at the 2020 SCIAC Championships.

The championship meet was cancelled due to the COVID-19 outbreak, but was scheduled for March 18-21 in Greensboro, North Carolina.

“I definitely had more left in the tank after SCIAC and was ready to make an impact at nationals, but sometimes things don’t go as planned,” Nybo said in an email interview. “More than anything, I’m disappointed that we were not able to experience it together.”

Head Coach Barry Schreifels felt that his swimmers were more than ready to go against their national competitors.

“We felt that preparation was more aimed at Nationals, they swam fast and set team records at our conference championship,” Schreifels said. “We felt like all three guys would have continued to go faster at their final meet.”

Their success this season is driven by their determination to do whatever it takes to get their hand on the wall first, Assistant Coach Hayley Blaauw said in an email interview.

“They go to our swim meets with the intention of winning as does everyone, but for them it’s different,” Blaauw said. “They know they’re great (whether they admit it or not) and they want to maintain their legacy that they have established since the day they started on this team.”

Brewer and Nybo, have both competed in the national championship every year of their collegiate career and both have been named All-America prior to this year’s selection.

“He’s been by far the steadiest swimmer in the history of the program,” Schreifels said. “In all of our meets, he’s pretty much a lock to win. He’s quiet and he’s like an assassin just doing his thing.”

“AJ [Nybo] has natural talent and emphasizes technique in his stroke,” Blaauw said. “I’ve seen and worked with many elite swimmers, so I know what good technique looks like and AJ has that.”

While he works hard to win individually, Nybo is a real team-player. His coaches said he is constantly focused on helping his teammates improve and compete as well.

“I don’t have a specific goal for next year but I will definitely do whatever I can to get as many people to nationals as possible,” Nybo said.

His focus may be taken partially by helping his teammates, but the hard work he puts in individually certainly shows. At the 2020 SCIAC championship, Nybo beat his own school record in the 200-fly with a time of 1:47.49.

“He’s probably the most talented swimmer on the team and a fantastic leader,” Schreifels said. “AJ [Nybo] is like the Pied Piper. Everyone knows that he’s good.”

Rodarte, who began competing for the Kingsmen in January, made an immediate impact despite a six-year gap in his swimming career.

“My swimming career has been pretty spotty. I stopped when I was fourteen and then picked it back up within the last year or so,” Rodarte said.

Previously, Rodarte was a collegiate skier, and only recently got back in the water. Despite the gap, Rodarte achieved a record-breaking time of 53.87 in the 100-breast, taking gold at the SCIAC championship meet in February.

“He came to our team and immediately, we could see that he is an absolutely fantastic athlete,” Schreifels said. “He got down to a point where he was going faster every single meet.”

Although his natural athleticism played a large role in his success, Schreifels and Blaauw both attest to his hard work and dedication to improving every day.

“He had a healthy perspective of how hard it would be, and he was willing to rise up to the challenge. His desire to perfect every detail of his stroke inspired the rest of the team to do the same,” Blaauw said. “With his excitement to work on all of the little things, others on the team followed suit.”

Next year, Rodarte and Nybo will get the chance to compete again for a spot in the NCAA championship, as well as earn another All-America team recognition.

“As much as they accomplished this year, I think you’re going to see the boys that are coming back push even harder for next year and accomplish even more,” Schreifels said.