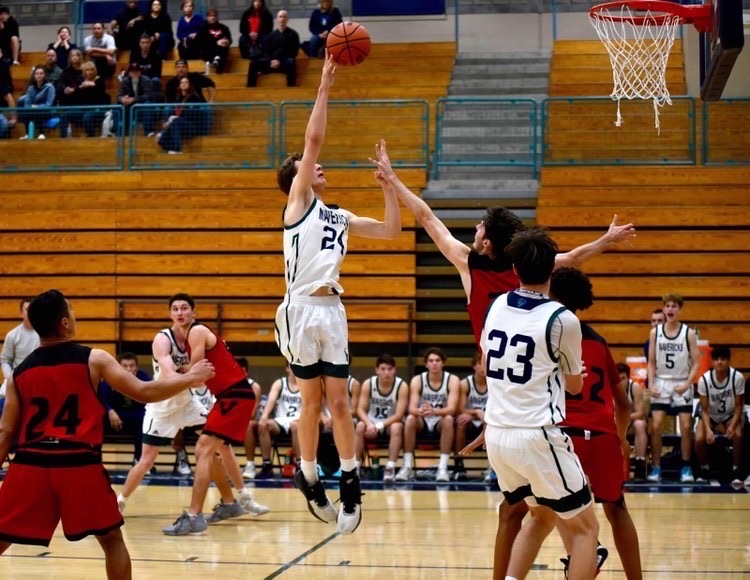 Tommy Griffitts has committed to play men’s basketball for California Lutheran University this fall semester. Griffitts is looking to use his leadership skills to fill the shoes of graduating senior Palmer Chaplin.

“In my 21 years as the Head Coach at [La Costa Canyon High School], I have never seen a player improve from his freshman year to his senior year as much as Tommy,” David Cassaw, head coach of La Costa Canyon High School’s boys’ basketball team, said. “His skill set, confidence, playmaking ability, whether it’s finishing around the rim, hitting the open three or making the right pass at the right time, have all improved.”

Griffitts played center for the La Costa Canyon High School Mavericks’ varsity boys’ basketball team, and announced that he would be playing for the Kingsmen on March 30, 2020 via his Twitter and Instagram accounts.

“After a great conversation with Coach White and my family, I am very excited to announce that I am committed to continue my academic and basketball career at Cal Lutheran University,” his tweet said.

This past season, Griffitts was featured in an article written by The San Diego Tribune, listing him as one of the basketball players to watch during the 2019-2020 basketball season, stating that he had multiple college offers.

“Tommy is an absolute gym rat- loves the game as much as any player I have coached so I believe CLU is gaining someone who will buy into and enhance the culture because of his love for the game and his desire to be a part of every aspect of the program,”.

Griffitts was given praise not only by Cassaw, but also by La Costa Canyon High’s Athletic Director Kari DiGiulio.

“I have had the opportunity to watch Tommy [Griffitts] develop and grow as a basketball player at [La Costa Canyon High]. I am most excited that his hard work paid off for him,” DiGiulio said. “He illustrated so much leadership this season, in more ways than just scoring. Tommy leads with work ethic and coachability.”

Griffitts will also be bringing a strong work ethic with him to Cal Lutheran. An article by Rancho Santa Fe Review shared that Griffitts had gone from “not playing a single minute as a junior, to being a key contributor” on the court with improved shooting, ball handling and passing skills.

The addition of Griffitts will add more height to the Kingsmen’s roster. Griffitts stands at 6 feet, 7 inches, which will aid in his ability to help guard other centers and big men in the paint.

In addition to his athletic talents, Griffitts will be a positive addition to the academic community at Cal Lutheran. Griffitts received the honor of being named part of the 2019-2020 All-Academic Team for winter sports, stated in an article written by The San Diego Tribune.

Griffitt’s passion and work ethic will fit well at Cal Lutheran, especially with the passion that Head Coach Russell White has for the game.

“I have known Coach White for a number of years and I know his passion for the game. I know he is an excellent teacher of the game and I know the type of player Tommy is obviously,” Cassaw said. “I think Coach White will love coaching Tommy and Tommy will love playing for him.”

Next season will be Coach White’s second year as head coach of the Kingsmen’s basketball team. This season the Kingsmen had an overall record of 4 -21 and are looking ahead to improving this coming 2020-2021 season.

“I believe Tommy is just beginning to tap into his potential as a player and I can’t wait to see how the next four years unfold at CLU,” Cassaw said.