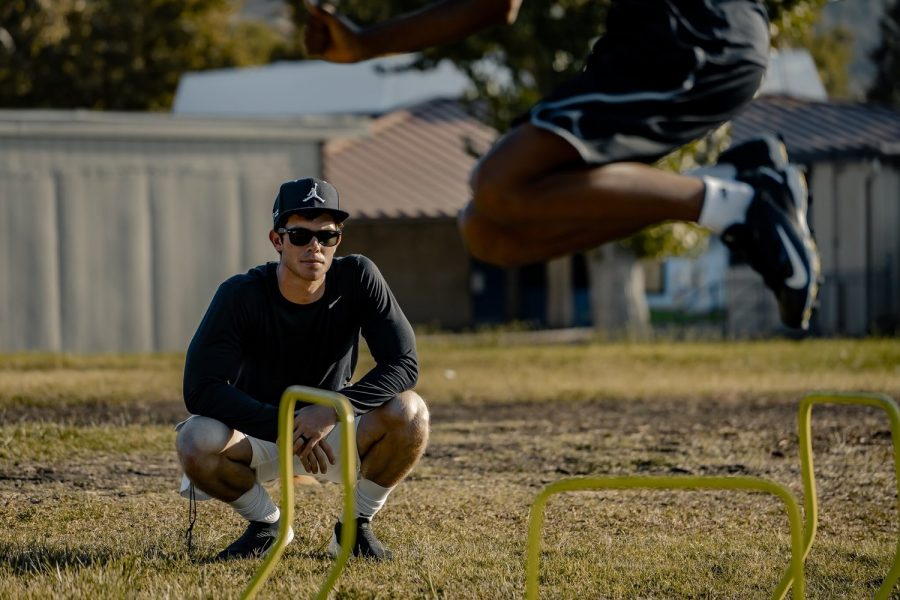 The Student-Athlete Advisory Committee convened for the first time since the spring to discuss goals for the rest of the academic year. SAAC is a coalition of leaders from the university's 22 sports teams who engage in community service and leadership initiatives. Pictured: Cal Lutheran Strength and Conditioning Assistant Coach Lucas Quinn trains student-athletes outside at a park in Thousand Oaks, CA.

Before Lucas Quinn became the California Lutheran University assistant strength and conditioning coach in 2018, he was a four-year starter and team captain on the Kingsmen football team.

“I played basketball mainly, and then played football for my senior year. I ended up having a decent season playing football, started at cornerback, and gained some interest from some [other] colleges,” Quinn said.

Senior Madison Griess, who played on the Regals soccer team for four seasons, has been an intern for the strength and conditioning program since the fall of 2018 and started working with Quinn in 2019 to train the football and baseball teams.

“He is incredibly respected around the community and has lots of experience developing athletes at all levels,” Griess said.

Quinn is not only a certified strength and conditioning specialist through the National Strength and Conditioning Association, but he owns and operates Lightning Quick Sports Performance, a training center in Westlake Village.

“When my training sessions are done at CLU, I head to my training facility to train more athletes and clients—from youth to professional athletes—for several hours,” Quinn said. “The goal for them is the same—get faster, more powerful, more explosive, stronger, more mentally and physically robust and more resilient against injury for their respective sport.”

Quinn has trained athletes in sports all across the board including baseball, basketball, football, volleyball, lacrosse, soccer, track and field, hockey, tennis, softball, beach volleyball and golf, according to lqsportsperformance.com.

At Cal Lutheran, Quinn is the director of football strength and conditioning, and also trains baseball, men’s basketball and women’s soccer.

“Being able to coach alongside Lucas [Quinn] for the past several months has been an incredible learning opportunity for me, and I’m grateful for everything that he has taught me,” Griess said. “Throughout my time coaching with Lucas, I’ve seen the impact that has on our athletes and how he is able to help them reach their potential.”

While playing on the Cal Lutheran football team for four seasons, Lucas exemplified skills across the field, starting at four different positions, including cornerback, free safety, strong safety and outside linebacker.

“Lucas [Quinn] is driven, hard-working, and always looking to improve. He is one of the busiest people I’ve ever met, and he always gets the job done,” Griess said. “It’s pretty remarkable how someone with so many roles to play can excel at every one of them and make it look easy. I have a great deal of respect for him.”

Quinn said his passion is working to develop student-athletes.

“Thus, part of the job is the opportunity I have to make personal relationships with athletes, and hopefully turn that into a positive impact throughout their time at CLU,” Quinn said. “Because I have been in their shoes, and in their environment, I think I’m able to connect with them in a unique way.”