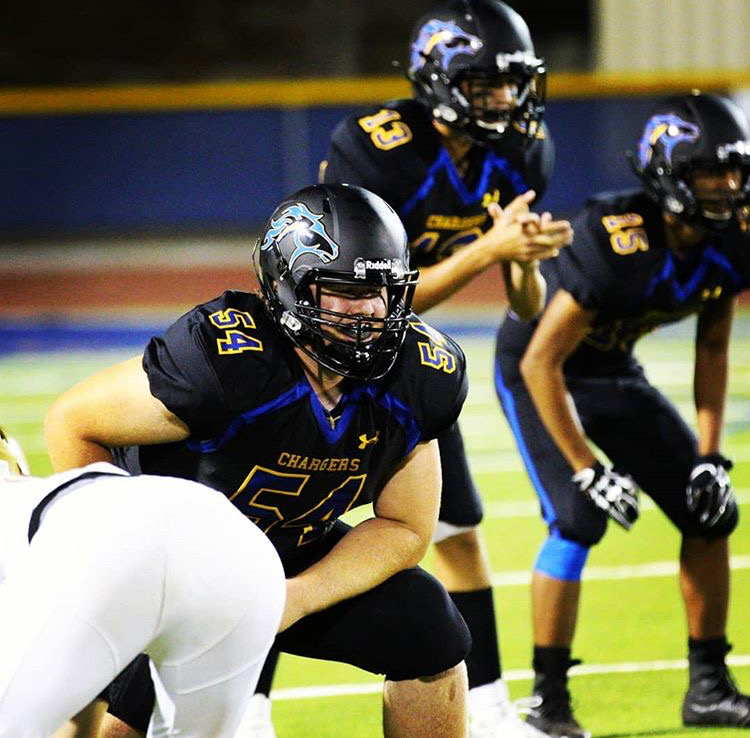 Agoura High School Chargers guard Max Thorne runs out on the field with his team for the pregame.

Agoura High School senior Max Thorne will be adding strength to the offensive line, as he joins the California Lutheran University Kingsmen football team for the 2020 football season.

“I think Cal Lu is a top team in the [Southern California Intercollegiate Athletic Conference], and I definitely want to be a part of a winning season,” Thorne said.

Thorne is a guard and has played football all four years at Agoura. When he first joined the team his freshman year, he wasn’t sure if he really liked football, but with all the time he spent on the field, at practices and in the gym, he learned to love the game.

“I am most proud that I learned to love football,” Thorne said. “I didn’t like it as much my first year, but I have friends [and experiences] that I have now because of it.”

Thorne, however, made a definite impression on the college recruiting world as he received 12 offers from Division III schools across the country to play football.

What has helped Thorne become successful in his football career doesn’t just come from hard work and putting in his own personal time, but the people who have encouraged him and shaped him into the player he is today.

Thorne received a lot of support from his coach Tyler Staley, who previously coached at Cal Lutheran. Staley was a mentor to Thorne, teaching him the right set of skills, making sure he had the right technique down and was overall an encouraging presence.

The Cal Lutheran football coaches visited Agoura High School a few times to talk with Staley and watch the team play. They liked the effort and skill Thorne brought to the table and reached out to him this past summer, before the start of his senior year.

Thorne ultimately chose Cal Lutheran to be his home for the next four years.

“I think it’s just because of the coaching program and the people I met when I came for an overnight visit. A lot of the other schools I visited, they just didn’t have what I was looking for in terms of an atmosphere,” Thorne said.

Thorne is excited about the opportunities being a collegiate athlete will provide him.

Although it will be difficult, he knows that “there is so much more to achieve at this level, and there are more opportunities.”