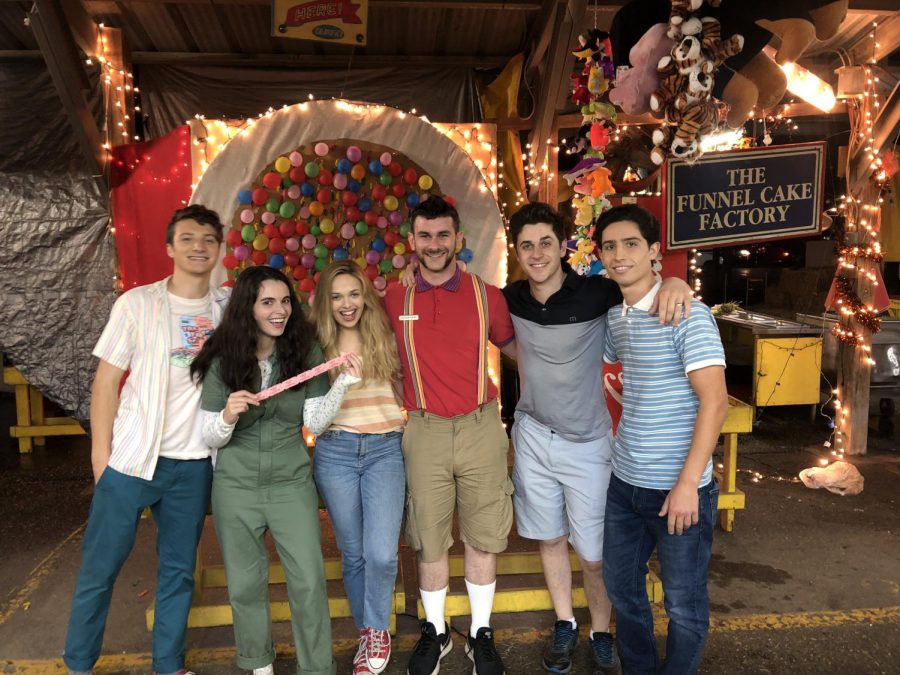 Jake Short, Vanessa Marano, Alyssa Jirrels, Frankie Manes, David Henrie and Lorenzo Henrie pose on the festival set of the new film "This is The Year".

The film, directed by Henrie and executive produced by Selena Gomez, is what Manes calls a “1980s-like, coming of age story.”

According to the IMDb movie page, “This Is The Year” follows “a nerdy high school senior” in his “last ditch effort to win over the girl of his dreams” as he and his friends “embark on a road trip to see their favorite band at the biggest music festival of the year.”

In June 2018, Manes, who graduated from Cal Lutheran in 2017, received a call from his friend David Henrie asking if he wanted to be a part of production.

“I actually started as an assistant on the film; then I ended up getting an acting role and also got promoted to an associate producer,” Manes said.

But Manes said he didn’t want to keep this opportunity for celebrity exposure solely to himself.

“I know a lot of people don’t have that same capability to meet people that were on Disney Channel shows and meet people that [are] working in the industry,” Manes said. “I always wanted to share that and help my friends and people that have helped me. I’ve worked with so many people from Cal Lutheran on other projects but this one alone I was able to bring three people on.”

Eghbali, who also graduated from Cal Lutheran in 2017, was the film’s stills photographer. His job was to capture “key moments” in the performance.

“When we [capture] a reaction of how [the actors] look when they just got that one message, those are those great stills,” Eghbali said.

“Capturing at least the behind the scenes of how fun set is another great thing to be doing,” he said. “It just shows the culture behind the making of the movie to then also reflect the movie.”

Class of 2017 alumnus, Baldwin, worked as a grip, production assistant and lighting aide for the music festival section of the movie, featuring lovelytheband.

Baldwin said one of his most memorable moments on set was giving a cup of coffee to one of his favorite actors, Jeff Garlin.

“I heard he was on set and I was like Frankie–I want to work that day. When he came out I gave him coffee and he was really cool to meet,” Baldwin said.

The Cal Lutheran production talents did not come together until filming moved to Los Angeles.

“That was when Frankie reached out to a lot of the crew members that worked on my sets before when I was doing short films with CLU people and that was when the CLU family really got to align together,” Eghbali said.

The alumni got to reminisce about making short films at Cal Lutheran while applying those skills to this professional feature film.

Eghbali described the transformation of his Cal Lutheran colleagues as funny. “[You’re] hanging out with the people who you were using DSLR [cameras] to make your little home videos” while still working on an expensive movie set, he added.

The movie, filmed from fall 2018 to early 2019, was originally set to be released in theaters this year. COVID-19, however, led to a new approach.

“We made the first [a]virtual premiere and that just seemed the best way to market the film,” Manes said about its limited release.

The virtual premiere for “This Is The Year,” held on Aug. 28, 2020, was hosted by TikTok stars Charli and Dixie D’Amelio. The premiere included a live Q&A featuring Gomez, Henrie and the film’s cast.

The production team is still determining when “This Is The Year” will have its widespread release.

“We went to school together and we always were working on low budget short films like a year ago, and now we’re on a full fledged movie,” Manes said. “It was a pretty good opportunity and I know they got a lot out of it and really appreciated it.”