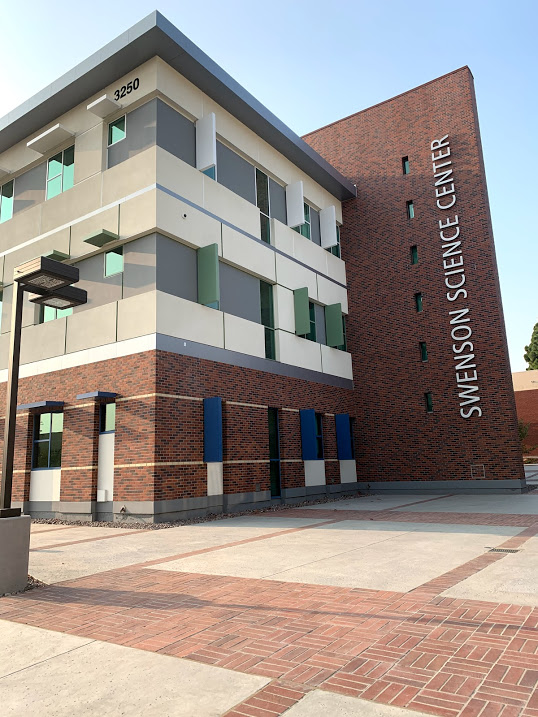 Up and empty: The Swenson Science Center is complete after two years of construction, but still awaits final permitting before labs can begin.

California Lutheran University’s long-awaited Swenson Science Center, which was first conceived in the 2000s, is open.

In a Zoom interview, Katherine Hoffmann, chair of the Chemistry Department at Cal Lutheran, said she is excited to finally move into the new building after watching its construction over the last two years.

“I can’t wait until it’s filled with students,” Hoffman. “[It would] be so much cooler if there were students here.”

Hoffmann said she and her colleagues were involved in the design process and actually met with the architects throughout the process to make recommendations for the classroom and lab spaces.

Ryan Van Ommeren, associate vice president of Facility Operations and Planning, said in a phone interview that this new building was not only needed for Cal Lutheran’s growing science department, but also the design of the science center was intended to send a message to prospective students.

“It sends the pretty definite message of ‘we’re serious about science’,” Van Ommeren said. “We built the biggest academic building on campus for science. Not to say that all of the other majors are not really important…[but] we are taking science seriously on this campus.”

Van Ommeren said that the previous science building, Ahmanson Science Center, was built in 1988 and although there had been small renovations and improvements to the facilities over time, it simply did not have enough space.

She said that she believes this new building will give the science departments room to grow.

Valerie Crooks, Cal Lutheran Facilities senior project manager, said in a Zoom interview, that she likes to describe the building itself as “science on display.”

She added that the entire building meets Americans with Disabilities Act stipulations for accessibility and some of the workstations can also be adjusted for students’ heights.

Crooks said from start to finish, the project took about six years to complete and totaled $34 million in expenditures. Van Ommeren said the building was fully paid for through donor grants, fundraisers, and debt financing.

Crooks shared that although there were some construction delays such as rain and having to part ways with the first architect to complete the project design, it was completed on time.

Van Ommeren said professors have started moving into the building, however, the building is still waiting on final permits and inspections to be signed off on before certain experiments can take place.

“Things just don’t flow with Coronavirus like they should…we should be there in a week or two,” Van Ommeren said.

Hoffmann said with or without virtual learning, it would have been a strange start to the semester for science classes since they would not have been able to jump right into all of their labs.

She added that she can’t wait to get her students back on campus so they can see their new building in person.

“We built it for them. It’s like when you’re a parent and you bought your kid exactly what they want for their birthday but you have to wait a month to give it to them…you know it’s gonna be great and they’re not allowed to see it yet,” Hoffmann said.