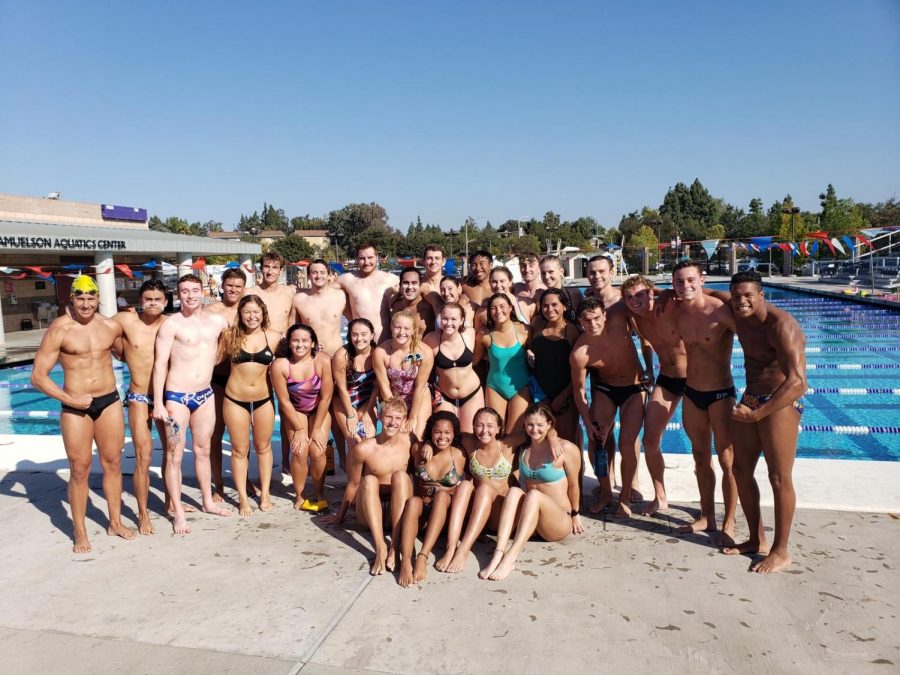 The Regals and Kingsmen Swimming and Diving team at practice pre-COVID-19.

The COVID-19 pandemic has added challenges and led to event cancellations across the nation–especially for athletes.

As certain activities resume throughout California, California Lutheran University has been able to allow some non-contact sports to resume access to their athletic facilities.

Head Coach for the Men’s and Women’s Swim teams, Barry Schreifels, said the team is “very lucky” to have access to the Samuelson Aquatics Center.

Schreifels said swimmers who live on or around campus have had access to the pool since early July.

Even though the swimmers are accessing the pool on their own time, Coach Schreifels said he “can post a workout, and a lot of [his athletes] do that and a lot of them do their own thing.”

He and his swimmers are hoping to have official practices soon, where they will maintain new social distancing protocols and wear masks when they are not in the pool. However, in order to get to that point, Coach Schreifels said “there are a lot of things [he and his team] will have to do individually, a lot of paperwork, a lot of testing.”

He added, “we had the county health inspectors…checking out everything to make sure it’s safe, and they think it’s terrific.”

Senior swimmer Kye Daniels said he “heard that we’re having official practices, but we still don’t know” and  “nothing’s for certain yet.”

Junior swimmer Aubrey Blickman said that she and her team have been told to prepare for practice but they won’t be able to officially start until Southern California Intercollegiate Athletic Conference (SCIAC) and the NCAA have provided an official start date.

Another challenge in this era of socially-distant sports, is communication.

In a recent article, a student-athlete described the communication as “wishy-washy;” however, Coach Schreifels disagreed. He said he believes “it has been terrific.”

He added that “we have to understand that the presidents [and other administrators] at our school have to make decisions day-to-day, week-to-week.”

He also commended Cal Lutheran for “[trying] to look at all the evidence” rather than being quick to cancel school and sports like other schools across the country.

Junior swimmer Athena Alexander said she believes “definitely having the facility open is like giving us more of the green light to practice.”

In the unfortunate case of a positive COVID-19 test among the swimmers, Blickman said she believes that the team’s love and devotion to each other will encourage them to follow the new protocols.

“We all care about each other so much so we want this for each other. So if that means we have to go get tested, or we need to maintain our social distance before we get in the pool, we’re all willing to do that,” Blickman said.

Schreifels said he believes “sports like golf, tennis … [will] be in the same position we are. I think if we can show a safe protocol and follow that protocol and show that it works,” then the other non-contact sports will be able to follow in their footsteps.

Alexander said she “[thinks] everyone is just crossing their fingers” in anticipation for the latest update concerning practices and competitions.

As a coach, Schreifels does his best to “tell [his team] to figure out a way to get better so that when it does end, you come out looking fantastic, looking like a faster swimmer.”

Schreifels’ advice to both athletes and non-athletes during the pandemic is “make yourself better. Don’t be a victim, be strong.”