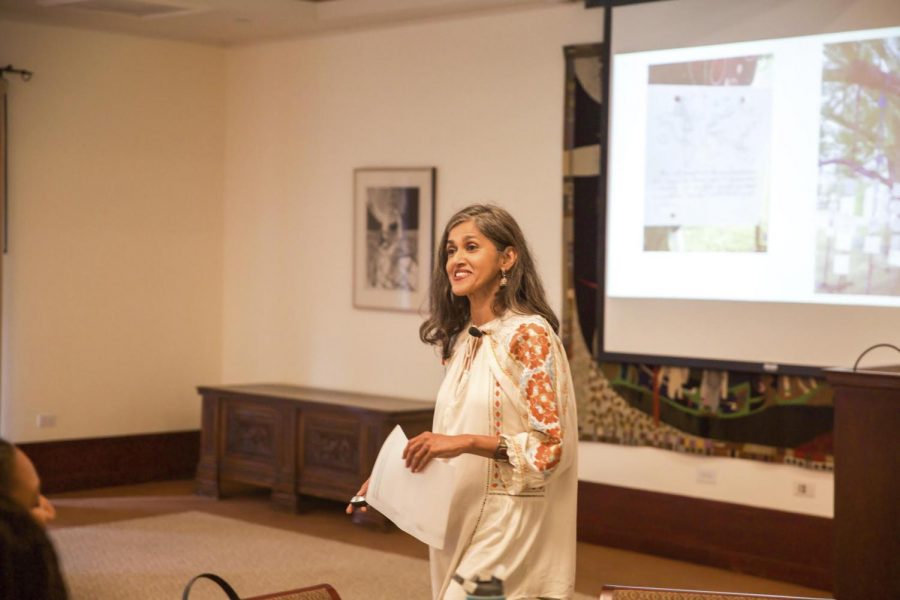 Sehba Sarwar speaks in front of a group of students at Scripps College in September 2019.

Sarwar is teaching the course both at Cal Lutheran and University of California, Los Angeles.

“I want students to make connections across [Los Angeles] and the world and gain understanding about shared struggles and joys at a local and international level,” Sarwar said in an email interview. “To make the saying think global and act local have new resonance.”

In a Zoom interview, Sarwar said becoming a professor wasn’t always in her playbook.

“I was already involved with local nonprofit arts organizations and I knew I wanted to do something differently. I was already doing a lot of many different things, so I began a literary collective which morphed into a non-profit arts organization called Voices Breaking Boundaries,” Sarwar said. “All of this journey has been very organic and I ended up, I never sat down and said in college, this is what I’m going to do.”

In addition, Sarwar’s own literary work, Black Wings , seeks to promote this awareness through sharing the story of a mother and a daughter struggling to connect because of the “generations, cultures and secrets” that separate them, according to her website. The fictional story takes place of a time of change in Pakistan and post 9/11 United States.

This social justice-mindedness bleeds into Sarwar’s instruction, as she teaches her students how to engage with stories of societal issues and feel connected within a global community.

Sarwar said her motivation for teaching is based on manifesting these connections.

She said her goals in work and life are “collapsing divisions … and [to] collapse distances between people … connect people.”

Sarwar said she typically doesn’t create a syllabus for her classes but instead waits to meet the students and see what she thinks they have yet to learn.

At Cal Lutheran this semester, there are only two students in Sarwar’s Storytelling for Social Justice course, Maybel Oo and Joslyn Buckley.

The class was initially supposed to include an outdoor art installation, but due to COVID-19, Sarwar improvised and tasked students with leading a public discussion series surrounding their individual topics.

The students will individually share their stories and the paper they will be writing for class on Zoom to a broad audience at Cal Lutheran. The open Zoom meetings will allow an open space for conversation.

In an email interview, Oo said her public discussion will focus on “the internalized racism present in Asian American and Pacific Islander (AAPI) communities in relation to the Black Lives Matter movement.”

Any student interested in participating in her discussion series is welcome to, even if they are not AAPI, Oo said.

The Zoom meetings will be accessible through Cal Lutheran’s English Department in coming weeks.

Oo said in a Zoom interview,  “[it] doesn’t really feel like a class, it feels more like a personal thing, because it is so personal.”

Oo added that she feels the class is especially relevant today, “with…Black Lives Matter and racial injustices and stuff that is going on currently, it’s really important to use narratives to tell your story.”

UCLA post-graduate student Sharmin Rahman said she shares a similar perspective about the class. Although there were more than two students in her class, she said it felt very personal when she took it.

Rahman said her class was focused on poetry by writers who were People of Color, or from marginalized communities, and their stories.

“I really appreciated how [Sarwar] made the curriculum that way,” Rahman said. “How we only read mostly writers of color and from communities that were marginalized because I had never really read these writers before; they’re not mainstream.”

She added that she found the class interesting because the different writings and poetry pieces included different themes such as “identity, immigration […] cultural differences.”

Sarwar has been invited to speak about her work as an author, poet and activist at different campuses including Scripps College and Rio Grande College.

Rahman said she feels it is important for students to have access to a breadth of perspectives.

“I would recommend [Sarwar’s class] to everyone,” Rahman said.