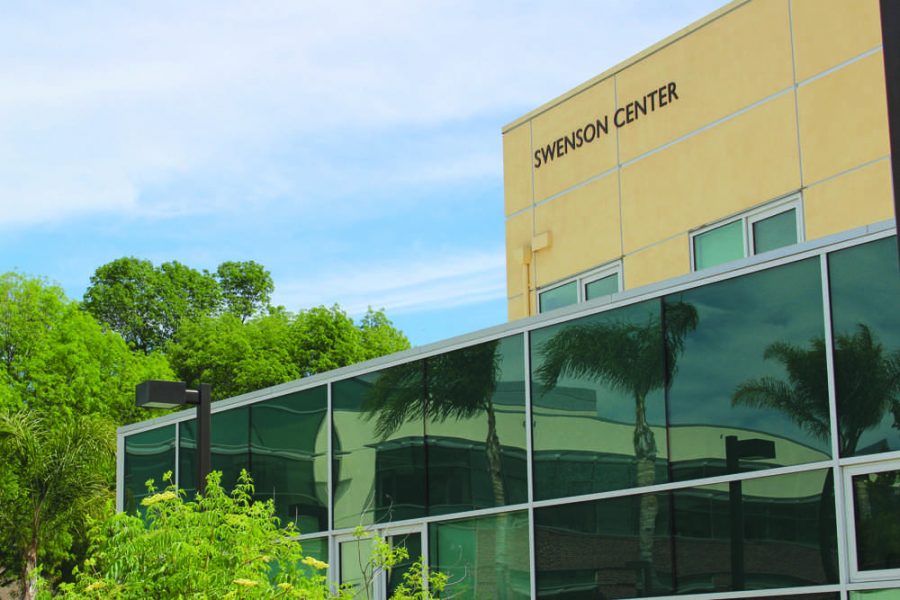 The green features of CLU: In addition to the Trinity residence hall and the Swenson Center, the new Ullman Dining Commons promises green features to conserve energy. To learn more about clean energy and energy conservation, visit the Green Week booths on Regals Way from April 22-25. Photos by Anna Coulson, Staff Photographer

Over the last week, 52 staff positions have been furloughed in efforts to balance California Lutheran University’s budget, according to University President Lori Varlotta.

“And while that’s painful and those were difficult decisions, that only translates to 10% of the employees were impacted by a furlough,” Varlotta said in a Zoom interview. “While it’s not nothing, there were [other college] campuses where many more people were impacted.”

In addition, 17 staff positions were completely laid off and the total number of furloughed employees comes to 66, including those that were completed prior to Varlotta’s presidency.

Cal Lutheran’s furloughs and layoffs come in response to a $23.6 million revenue shortfall in the 2020-21 budget.

The university’s cuts in expenditures began with cutting goods and services including postage, new technology, office supplies and hospitality “more than 50%,” Varlotta said. From there, the Board of Regents allowed the university to use the $2.8 million surplus from the year prior.

“Even when we added all those together unfortunately we weren’t able to close the $23.6 million shortfall,” Varlotta said. “So I reluctantly had to go towards the next step so that the next step was the … the pause in retirement.”

From November to May, the university will cease its 10% contribution to all employees’ retirement funds.

“So even after we did all of that there, we’re still a few million dollars short, so we had to go to a furlough and a layoff program,” Varlotta said.

The president’s cabinet has been working six days a week and agreed to forfeit all holidays to dedicate extra hours to develop strategies to mitigate the budget shortfall.

The cabinet, however, will not be furloughed.

According to Varlotta, the furlough and layoffs were determined by position, and names of individuals were not included in the cabinet’s decision-making process.

“I am confident that we did this in a way that was–as hard as it was to do this–that we did this in a way that was equitable, that makes sense,” Provost Leanne Neilson said in a Zoom interview. “We weren’t looking at [names], we were looking at jobs, and jobs that we felt could be either redistributed or reduced based on what’s going on, on campus.”

According to Patricia Parham, assistant vice president for Human Resources, each VP was tasked with assessing what areas on campus were most impacted by COVID-19–that is where the demand for labor was significantly reduced.

“The first is athletics, obviously, without fall sports, the organizational volume was reduced,” Parham said.

A significant portion of the layoffs came from athletics, Varlotta said.

She added, “I will go on record saying this, that a number of layoffs did come from athletics and again because the disruption to athletics has just been so severe.”

How staff is affected

Not only those working with athletics, however, were impacted by layoffs.

“In my 18 years at Cal Lutheran, Pat Egle consistently brought heartfelt compassion to her role as administrative assistant,” Adina Nack said in an email interview.

Egle, an employee of the university for over three decades, was one of the 17 staff members that were laid off.

“It’s hard to imagine what it will be like to return to the Swenson Center without Pat. Literally, Pat Egle was the heart of the Social and Behavioral Science Division,” Nack added.

In addition, some of those working directly with students, including those in Residence Life and Student Life, were subject to furloughs for up to 25% of their time.

“I’ve been at Cal Lutheran for 27 years,” Neilson said. “So I’ve been here a long time. And we have, we have never, in my … Well, I will say back in the mid 90s, we had some enrollment drops and we had to make some cuts. But I mean, it was … it was nothing like this. It was minimal.”

During the Q&A portion of the June 26 Connecting @ Cal Lutheran webinar former President Chris Kimball suggested that furloughs and layoffs would begin at the top.

“If cuts are needed in the future then, yes, they will be done with equity in mind and one of the core principles is: those folks who sort of have the most and that begins with the president, with me, with the cabinet, are the ones that need to sacrifice the most,” he said during the webinar.

According to the university’s 2017 990 tax documents, VPs were some of the highest compensated employees of the university, with reportable compensation averaging $190,531.4.

“If we have to do that … there is no cabinet or presidential immunity from that,” Kimball said during the webinar.

An employee of the university who wishes to remain anonymous said the cuts came as a shock to them.

“And for me to hear that that cabinet didn’t take a single, you know, reduction to compensation other than maybe a couple of holidays, made me incredibly angry, resentful,” the source said.

Varlotta said, in effect, the cabinet and upper administration is taking the “biggest cut,” as the reduction in retirement contributions is 10% across the board, thus having the biggest monetary impact on those with the highest salaries.

“You couple, the largest cut–in terms of our retirement benefits, plus, again, an official six day work week, and we, I guess, and I believe, I want to hold the cabinet most accountable,” she said. “I think that we do that through an expert expectation to perform at really high levels during the crisis. And then in real dollars, we took the largest cut.”

According to Parham, the university hopes to bring those furloughed back to 100% as students return to campus and the budget permits.