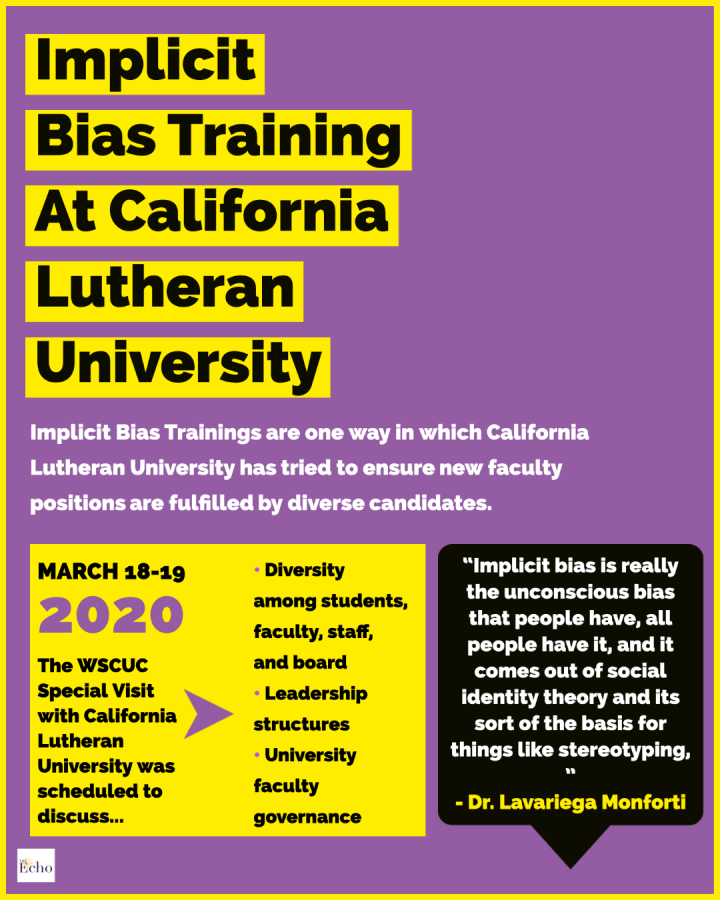 “We do an implicit bias training for all faculty who are going to serve on a search committee,” Jessica Lavariega Monforti, dean of the College of Arts and Sciences, said in a phone interview.

Lavariega Monforti said search committee members begin their training by taking an anonymous test created by Harvard University, known as Project Implicit, which “can help faculty understand their own biases,” and allows them to bring their results into discussions about how these affect their perception of candidates.

Anyone can take the test for free and it includes an analysis of race, gender, sexual orientation and other biases.

In these discussions amongst search committee members, tools are offered to “combat implicit bias so that we have more equitable search results,” Lavariega Monforti said.

Every time a faculty position opens, a search committee is created to find and review candidates. The committee is typically made up of members of the department that is hiring and two trained equity advocates, Sheridan Wigginton, president of the of Afro-Latin/American Research Association and professor at Cal Lutheran, said in a phone interview.

“Implicit bias is really the unconscious bias that people have, all people have it, and it comes out of social identity theory and its sort of the basis for things like stereotyping,” Lavariega Monforti said.

The mandatory training is meant to help prevent faculty serving on the committees from making decisions about applicants based on their preconceptions about others’ race, gender, or identity.

Haco Hoang, chair of the Political Science Department, has participated in these trainings as both a member and a chair and found them very beneficial for the committees in writing the initial job applications and reviewing responses–which, Hoang said, is where the training matters most.

“I used to hear people say things like, well, are they a CLU fit? And I always ask like what does that mean, like fit?” Hoang said in a Zoom interview. She said she found that statement to be a subtle way “for people to say you didn’t look or act like a certain [way]” and to question if the applicant was “Lutheran enough, were [they] white enough?” she said.

When she serves as the chair of the committee, she said she required applicants to submit a diversity statement along with their application.

“It’s not enough just to say, hey, we want People of Color,” Hoang said. “We actually have to make an effort to signal to people we’re looking for … [diverse] candidates.”

In her time as search committee chair, she said she wanted to make it clear to other staff that diversity was not simply an extra qualification for the new hire, but a trait to prioritize.

“We’re an HSI now, we’re a McNair institution now, we are in Southern California … understanding diversity and knowing how to advise and work in a diverse environment and advise diverse students and interact with diverse populations is not just a preferable skillset, it’s a requirement,” Hoang said.

Wigginton, who served on two search committees during the 2019 fall semester, said she did not attend the training that semester but recalled from previous experience that the training sessions were helpful in the multiple stages of the hiring process.

She did not attend the training last semester due to schedule conflicts but was still offered a spot, which she attributes to her history on search committees in the “fairly recent past” and her involvement in the training of equity advocates.

The past trainings offered tips regarding “how you would write the job ad and certain language that you could include in your ad that would signal that the search was [considering] issues of equity and inclusion,” Wigginton said.

The session also included information regarding where the job listing should be posted to reach diverse and minority candidates to form an assorted pool to choose from.

“They might be able to find it, for example, in The Chronicle for Higher Education but if they find it in an association dedicated to like Hispanic scholars, African-American scholars, or Asian-Pacific Island scholars” then that “[sends] the message that we know these outlets exist and we want to reach out to these populations in particular,” Wigginton said.

These trainings are part of the school’s effort “to improve campus climate” and shift away from a “status quo perspective,” according to the report filed to the WASC Senior College and University Commission in December 2019.