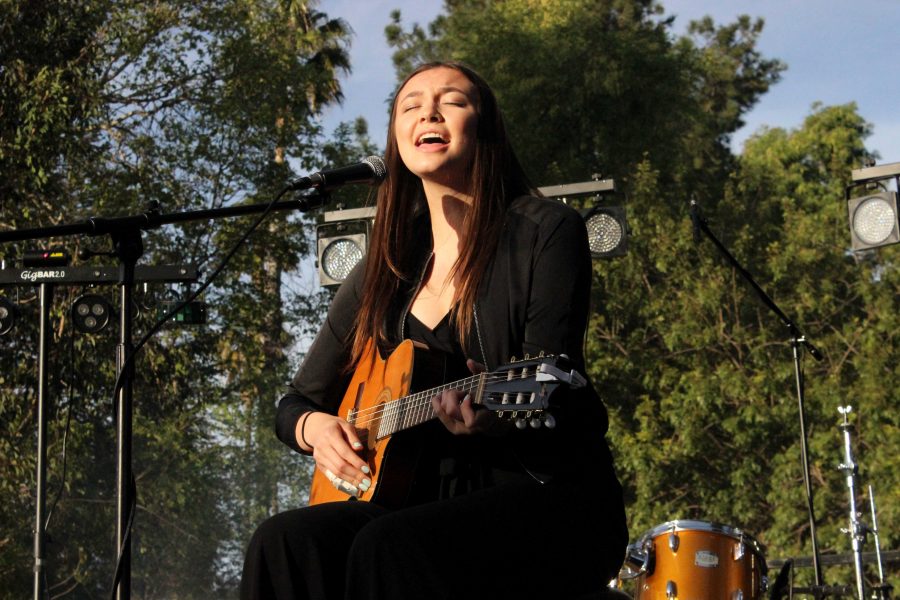 Cal Lutheran Alumna performed an original song about tragedy and loss in the third annual Sunrise Remembrance Ceremony in her hometown of Las Vegas, Nevada, the site of the Route 91 mass shooting. Pictured: Poggione performs her original song “Thinking About You," in Kingsmen Park.

The third annual event, held at the Clark County Government Center in downtown Las Vegas, Nevada, served as a remembrance of the 58 people who lost their lives in the deadliest mass shooting in U.S. history on Oct. 1, 2017, at the Route 91 Harvest Music Festival.

In a phone interview, Poggione said that she remembers feeling overwhelmed when the shooting that affected her hometown happened while she was on campus. At that point, Poggione turned to her music.

“So there was a lot going on … and there was just like, a lot in my mind,” Poggione said. “And that next morning, I just went to the piano practice rooms on campus, and it just like poured out of me like in 10 minutes. It was … a therapeutic experience for me.”

Poggione said it was an honor performing the song she wrote in 2017 during those moments of uncertainty, “A Little’s Enough”, at the event.

She said that she was initially a little nervous, but once she started singing her nerves went away as she focused on honoring and uplifting the people there.

“And it’s really cool that I got to perform it … for all of the victims, families and everybody that came out to support all the victims’ families … it kind of feels like a full-circle experience,” Poggione said. “Like I wrote it as a way, just for myself, kind of the fact that I got the opportunity to share it with other people was like such an honor for me. So when they asked me to do it, I was very honored.”

Mynda Smith, a family friend of Poggione, lost her sister the night of the shooting.

Smith said on the first anniversary of the shooting, she made contact with community members and the county government and helped develop the idea for Sunrise Remembrance to commemorate the 58 lives lost.

Smith said she recommended Poggione as a performer.

She said she told the other organizers “hey, there’s you know, Paige is a beautiful singer, she wrote a beautiful song.”

Smith said she knew Poggione sang beautifully and doesn’t remember the first time she heard the song “A Little’s Enough,” but she feels emotional when she listens to it live.

For this year’s event, Nevada Gov. Steve Sisolak lifted his mandate on gatherings to permit 250 people to attend the ceremony, while enforcing masks and social distancing.

“So I think that I was really doing well until Paige started to sing … when she sang Amazing Grace. Especially as they were playing the pictures of the 58 victims. It was such a pure moment,” Smith said. “I don’t even know how to say like, the beauty … was captured in that one small little moment was just, it was it that’s, that’s when the emotions hit.”