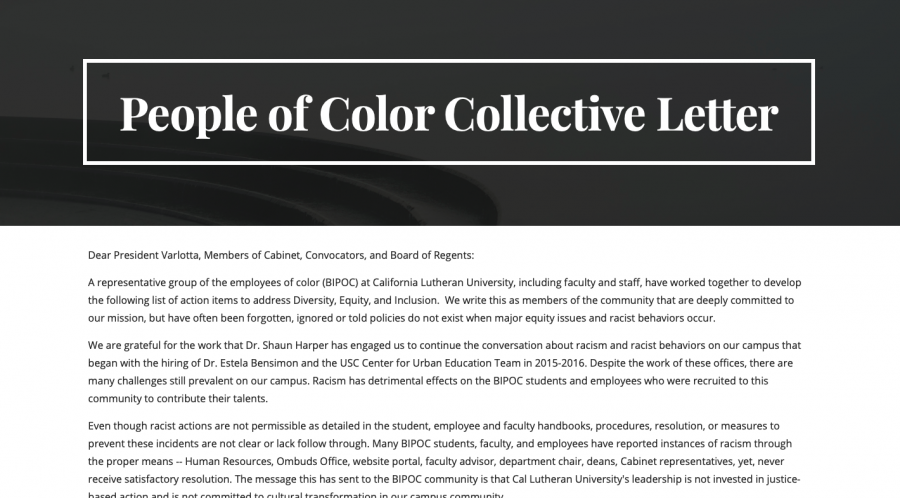 After several meetings with members of the People of Color (POC) Collective and various affinity groups on campus, California Lutheran University President Lori Varlotta said she is committed to implementing several changes to policy and organizational structure to help create a more equitable campus culture.

“I really like to delineate priorities and get through those, and then [determine], what will the next steps look like,” Varlotta said in a Zoom interview. “And that strategy being very deliberate and explicit about okay, here’s what we’re going to tackle now.”

These proposed structural changes include a bias incident reporting system, updating policies surrounding discrimination and harassment and exploring adaptations of the executive offices.

The bias incident reporting system, first proposed under former President Chris Kimball’s anti-racism initiative, is slated to be ready for its final round of revisions in the next two weeks, according to Varlotta.

“If and when an incident occurs, students and faculty and staff [will] know to whom to report it, and what the steps are,” Varlotta said.

In addition, the university president said the cabinet and Human Resources are finalizing a draft of new policies surrounding harassment, discrimination and the “prohibition of retaliation” that will be examined by members of the POC Collective, the President’s Diversity Council and other “key stakeholders” prior to its implementation.

“As a group we were able to discuss a variety of topics regarding Diversity and Inclusion, with the goal to move towards equity,”  POC Collective Leadership team Andrew Castro, Nicole Gonzales, Rona Koe, Caeli Koizumi, and Paloma Vargas said in a joint statement to The Echo. “The group was able to voice concerns and discuss with Dr. Varlotta steps to move the campus forward in these efforts.”

The meetings came as a result of a Sept. 18 letter from the POC Collective to the President, cabinet members, Board of Regents and Convocators.

Varlotta said the meetings helped her put context behind some of the asks in the letter, including the discrimination and harassment policy change, a voice on the Cabinet, Board of Regents and Convocation and movement towards the removal of the Gallegly Center.

The Gallegly Center, however, was the only issue Varlotta said she felt could not be addressed at this time.

“That cannot be the priority right now, because that is so complex, that we agreed that we would put it in the parking lot,” she said. “Not because it wasn’t important, but because these other areas would be areas where we could have movement quickly.”

Brian Collins, a Cal Lutheran Faculty Convocator and Professor of Philosophy, said he believes everything presented in the POC Collective letter is attainable.

“Actively moving towards removing the Gallegly Center is also, that would be a big step,” Collins said in a Zoom interview. “I’ve already said that I think these are achievable. And I signed the letter in support of these. So my support, my support is behind them. And I think they can be done. And I think we should continue to move towards them.”

Varlotta said she expects to begin evaluating the existing administrative structures “towards the latter part of the fall.”

She said she hopes to “engage the President’s Diversity Council” in evaluating how upper administration can best be molded to serve and implement diversity and inclusion initiatives.

“Is the structure to create a standalone office? Is the structure to have a more distributed model where there are various offices working on it, you know? Are we ready to have a Chief Diversity Officer? So those questions about structure will probably be the next big thing we tackle,” Varlotta said.

While the president and cabinet members have begun addressing items in the POC Collective letter, Collins said the Convocators, who only meet twice annually, have yet to discuss the letter in full.

Collins said he expects the letter to be a topic of discussion during the Convocation’s fall meeting.

The meeting will be held virtually Oct. 15-16, according to an email from Rev. Melissa Maxwell-Doherty, vice president for Mission & Identity.

“So I had already gotten [the letter, before it was sent to convocators] and … I chose to sign it immediately,” Collins said. “I think it’s an extremely important call and explicit charge and reminder that we at Cal Lutheran need to continue working through the issues we faced, as a university and more even more broadly, as a country having to do with racial injustices.”

Susie Lundeen Smuck, chair of the Board of Regents, did not respond to requests for an interview by The Echo’s deadline.

“We need to further improve the campus culture here,” Varlotta said. “Part of those improvements definitely need to prioritize inclusivity and, you know, the examination of, you know, structural racism and structural oppression, like, I’m very, very interested in that.”