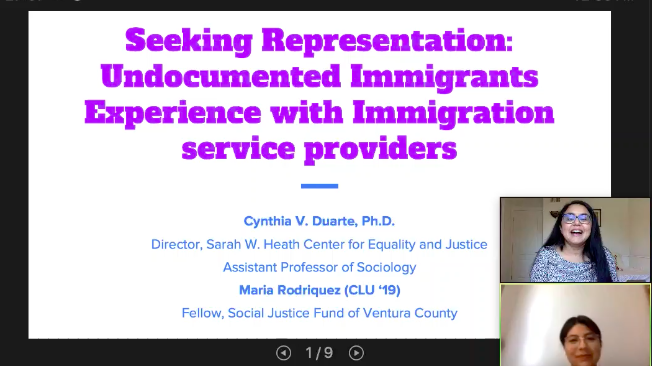 On Oct. 2, Cynthia Duarte, director of the Center for Equality and Justice and assistant professor of Sociology at California Lutheran University and Maria Rodriguez, fellow for the Social Justice Fund for Ventura County, presented their research surrounding the barriers undocumented immigrants face when seeking legal representation.

On Oct. 2, Cynthia Duarte, director of the Center for Equality and Justice and assistant professor of Sociology at California Lutheran University and Maria Rodriguez, fellow for the Social Justice Fund for Ventura County, presented their research surrounding the barriers undocumented immigrants face when seeking legal representation, via Zoom.

In a Zoom interview, Duarte said “there’s a lot of fraud that occurs and that fraud can be anything from financial repercussions where you lose your money or it can have very dire consequences such as deportation.”

Duarte said that there is a specific problem that has to do with misidentification of a group of individuals who are known as Notarios. In Mexico, Notarios are qualified to do certain types of legal work, Duarte said.

In the United States, however, there are officials called Notary Publics, which sounds similar to Notarios, but Notary Publics can only witness the signing of legal documents, Duarte said.

“Many of them will then start to call themselves Notarios and then represent themselves as though they can do more legal work for immigrants than they are legally allowed to,” Duarte said.

Duarte said this misrepresentation can lead to mistakes in an immigrant’s case, which can lead to future problems for that individual.

During the presentation, Duarte said that in many cases, individuals would unknowingly pay more for these Notarios than what a licensed immigration attorney would charge.

Rodriguez said that in many cases, immigrants are unaware that Notario ‘s aren’t fully licensed attorneys.

She added that even though immigrants can technically seek asylum at the border, the current system is flawed.

“Our current policy has been to automatically place people in detention and more recently separate them from their children,” Rodriguez said.

Duarte said that one of the most important things needed to combat this problem is proper education, informing the immigrant population of who can legally represent them. Rodriguez added that some of the future work in this area should include advocacy efforts for low-cost and no-cost attorneys.

At this point, Duarte said their project is aimed at documenting immigrants’ experiences with legal services.

“From there, we can build an education campaign and try to advocate for more resources for this community,” Duarte said.

Duarte said due to the restrictions placed on the project by the Institutional Review Board, it is not possible for Cal Lutheran students and employees to get involved in the project itself.

However, Duarte said that in the future, after their project is complete, there will be opportunities for individuals to get involved with potential advocacy campaigns.

In addition, Duarte said they would really appreciate support in the form of giving out brochures, helping with workshops or lobbying for fair legal representation for immigrants.

“Once the advocacy campaign begins, we need everyone’s support for that,” Duarte said.