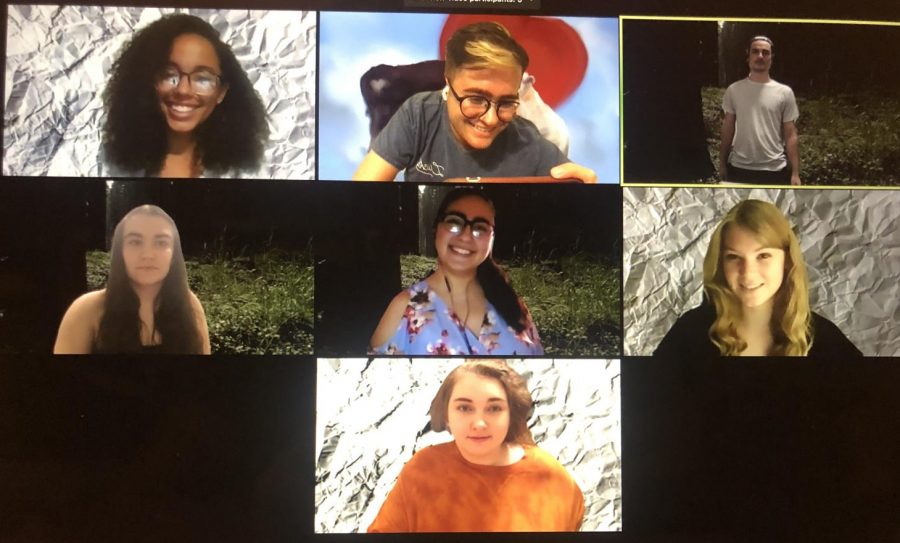 From the top left to right, Charis Naini Pulei, Garrett James Wyatt, Waqar Ahmed, Izzy Bordagaray, Bianca Akbiyik, Michaela Crispin, and Savannah Simpson smile for a photo Wyatt takes of the virtual rehearsals for the student directed play, The Women of Lockerbie. The play will be shown virtually at the end of the month.

California Lutheran University’s Theatre and Dance Department will continue to present virtual theatre productions throughout the fall semester, beginning with “The Women of Lockerbie”. The play, inspired by true events and written by Deborah Brevoort, will be live streamed Friday, Oct. 30 at 7 p.m. and Saturday, Oct. 31 at 2 p.m.

“It’s been really interesting trying to figure that [virtual performance] out because we never expected that this was how I was going to direct a show .. it’s really exciting to, you know, have something like that [directing a dream show] come true in my senior year,” said Garrett James Wyatt, senior at Cal Lutheran and director of The Women of Lockerbie.

Wyatt said this is his first time directing a full length show and he never imagined this happening under the current circumstances. He was excited to suggest this play and have it be chosen since he  had been wanting to direct this specific play for years since he first saw a friend perform it in high school, Wyatt said.

The play is a tragedy about a couple living in constant grief, seven years after their son was killed in one of the first big terrorist attacks on a plane in 1988, Wyatt said. The women in the town where the plane crashed had been fighting with the American government to get the clothing and belongings of the victims back to their loved ones, but the government wants to burn them.

“It really shows an intimate picture of grief and it’s not polished, which I appreciate because a lot of plays and movies and stuff like that try to make grief, I don’t know, glamorous or not as raw as it should be,” said Izzy Bordagaray, senior at Cal Lutheran and one of three lead roles in the play, in a Zoom interview.

Wyatt said the class of 2021 has been through a lot, with wildfires every fall semester and the Borderline Bar & Grill shooting, among other tragedies.

“The class of 2021 and everyone who’s been there since then has just really gone through a lot. Gone through a lot of loss and grief and I feel like this show is a really cathartic experience,” Wyatt said.

Bianca Akbiyik, junior at Cal Lutheran and another lead in the play, said Zoom is posing new challenges to production.

“I have to have my headphones in, otherwise my sound will echo to everyone else… and then Garrett will be like, you’re standing too close to the laptop, and then I’ll be like, but my headphones… I can’t go too far,” Akbiyik said.

She also said she is more aware of her surroundings and it can be harder to put everything she has into the performance.

“Having people around me like my parents are in the other room and I have neighbors downstairs, so it’s like I don’t wanna be too disruptive, but at the same time I gotta do what I gotta do. I have to put on this performance–I can’t just tone it down during rehearsals,” Akbiyik said.

Bordagaray agreed that Zoom adds more challenges for the actors other than just technical difficulties such as Wi-Fi freezes.

“Also just figuring out how to hold your body with the webcam is so different cause you can only see a small portion of you. So it’s just been like interesting to figure out how to do it all,” Bordagaray said.

Akbiyik and Bordagaray both said it is difficult not to receive feedback or energy from the audience.

“I’m just going to have to trust that what I’m doing is the right thing because if I doubt myself, then that completely takes away from the performance,” Akbiyik said. “It just teaches us to be a little more confident in what we’re doing and to really make sure we’re locking everything in before the performance.”

Wyatt said the production team is trying to make it seem more authentic, as though the cast is performing in person. He does not want it to feel like another Zoom meeting.

“We’re using like greenscreens and different cameras and microphones to have some sort of sense of a real production element rather than it just be actors sitting on Zoom and reading from the script,” Wyatt said.

Joshua Clabaugh, technical director for Cal Lutheran’s Department of Theatre and Dance Department, said in a Zoom interview that there are four different programs used during the performance.

“We’re taking all of those individual Zoom feeds and compositing them into one screen so we can manipulate… we can make it look like they’re looking at each other versus having side by side looking to the left or right,” Clabaugh said.

Wyatt said he believes there is a silver lining to performing and practicing via Zoom.

“Because we’re in a Zoom world, we got to have a Q and A discussion with the playwright over Zoom … [we] had a really great discussion on the show and what it’s about and where she got her influences,” Wyatt said.