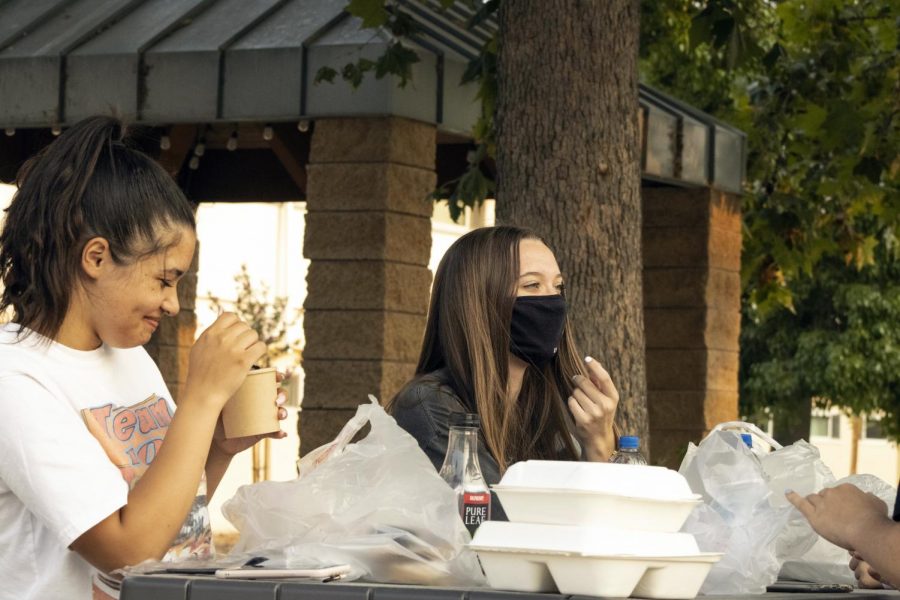 From left: Freshman roomates Naja Butler and Coral Fay enjoy takeout in the Pederson/Thompson courtyard Sept.15. The Office of the President announced in an Oct. 15 email that the university will offer hybrid--both in person and remote--learning in the spring. These plans come at the loss of spring break, to reduce travel and limit the potential spread of the virus.

California Lutheran University students have been waiting to hear what the school’s plans are for the spring 2021 semester. On Oct. 15, President Lori Varlotta announced the preliminary plans in an email.

The email from the Office of the President stated that spring break will be canceled to reduce the risk associated with back-and-forth travel, and spring instruction will end one week early for both traditional undergraduates and graduate students, making a 15-week semester.

Leanne Neilson, provost and vice president for Academic Affairs, said this decision was made by the Emergency Operations Committee and came pretty easily. She said the committee wanted to approach spring break with the same rationale that was used in weighing the feasibility of Thanksgiving break in 2020.

Maria Kohnke, associate provost of Academic Services and Registrar said students will still have Presidents’ Day and Good Friday off.

“If we give a week off for spring break, that increases the opportunity for someone to bring back COVID-19 to campus and have a larger outbreak,” Kohnke said.

Over the summer, the university determined that final exams would be conducted remotely after Thanksgiving break, to reduce the risk of students returning to campus and bringing the virus with them, Neilson said.

Chris Paul, assistant dean of Students and director of Residence Life said she believes this plan could make commencement ceremonies a viable option in May 2021.

“I think this is the safest plan for our community and also could allow for in-person graduation ceremonies. Of course we don’t know what that could be just yet but if there is a possibility that can happen, I think it is important to try everything we can to get to that goal,” Paul said.

The Oct. 15 email from Varlotta, announced Cal Lutheran’s plans for smaller, staggered commencement ceremonies on campus for the class of 2020 and 2021, but the feasibility is to be determined.

“It’s a little complicated but it will be nice because it will give us a chance, hopefully, to bring everyone in person [for graduation],” Neilson said.

Neilson said she is always watching what’s going on at other universities and a lot of universities are canceling their spring breaks, so this situation is relatively common.

On Oct. 15, @callukingsmemes posted a question on their Instagram story asking “what are your thoughts on a full S/21 semester without a spring break?”

One person responded “we, the students, need mental breaks. I don’t like that we don’t have breaks now either.”

Heresco said he understands students will probably be a little more stressed without having a spring break, but the university is most likely right about there being fewer sick students upon their return to campus.

“I think it’s pretty challenging because on the one hand I feel that spring break serves an important function on the academic calendar to give students a little time to get away, escape, and have fun,” Heresco said.

Another student who responded to the Instagram poll felt the same way.

“Zoom school is so much harder than regular school. You def need some kind of break [in a] semester,” the anonymous response said.

“It is our chance to catch up on work, but it is really important to have that week away often from classes, sometimes from meetings,” Heresco said. “So faculty also really liked spring break and so not having spring break will also take a different toll… both professionally and emotionally.”

The lack of spring break may create a different dynamic for students, faculty and staff.

Kohnke said, “the decision is being made in the interest of the students, being able to give them the best possible experience in the spring and to keep everyone safe.”

This article was updated Oct. 17 at 2:15 p.m. to correct the spelling of Maria Kohnke.