Kingsmen fall to Whittier at home 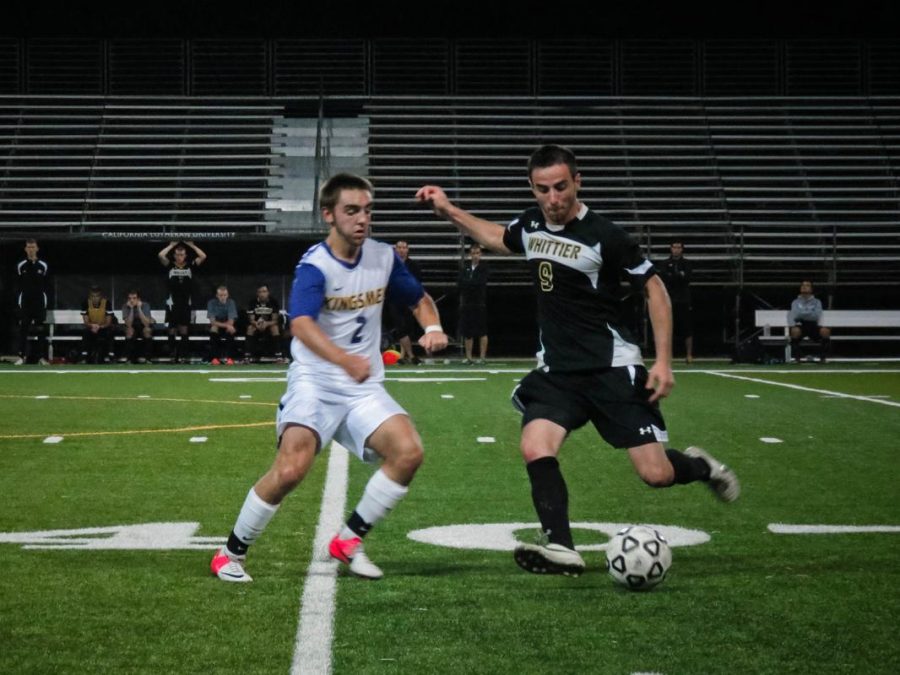 The Homecoming crowd came out in full force Saturday night for the CLU Kingsmen soccer team. The Kingsmen (7-9 Overall, 5-7 SCIAC) took on the Poets of Whittier College (6-10 Overall, 6-6 SCIAC). Both teams came into the night in the mix for postseason play as the SCIAC tournament approaches.

The speed and intensity of the game started off very high, which led to a red card and an ejection of Whittier’s David Diaz early in the game. This gave the Kingsmen an early advantage in numbers, but it was difficult for them to get the upper hand because of this.

“They were down a guy in the first half. We could have got some more people in the attack, but we didn’t want to have a counter attack because of that,” said head coach Dan Kuntz. “They do a lot of long kicks out of the back. They don’t pass the ball much. They get it, launch it, and run.”

Kuntz saw his team falling into Whittier’s game instead of theirs and said that definitely hurt them.

Because of that, the Kingsmen surrendered a goal halfway through the first half to Srdan Jovanovic giving them an early deficit.

This didn’t deter the Kingsmen. Senior forward Raul Yepez passed a couple of defenders and fired the ball past the goalkeeper to send his team into halftime tied with the Poets.

During the break, Kuntz stressed to his team that they needed to get back to the way they play. This is exactly what the Kingsmen did and they were able to possess the ball in the backfield and work their way up the field. Unfortunately, the Kingsmen weren’t able to convert.

The Kingsmen had 18 shots in the second half to Whittier’s’ three. However, it was enough for the Poets because Jovanovic scored one of those three shots with nine minutes remaining in the game. This put them up 2-1, dropping the Kingsmen to 5-8 in SCIAC play.

Giving the importance of the match, this loss was importance for Kuntz to swallow.

“We knew what this opportunity meant for us. We’ve been fighting to get that, but we haven’t been able to turn one, so it’s really frustrating when you get there and have those opportunities, but you can’t get it closed. It’s very frustrating,” said Kuntz.

Moving forward, the Kingsmen still have an opportunity to make postseason play. Kuntz is confident in his team but knows there needs to be some changes in the team.

“We got to win at home. We struggle at home but win away.  We need to move the ball even quicker on the ground and stick to our game plan. We need to make sure to finish when we have opportunities to finish,” said Kuntz. “It’s a matter of execution and staying organized and not giving things to other teams.”

Yepez, who leads the team now with nine goals on the season, also sees an adjustment that needs to be made.

“We have to push harder. We get scored on and we put our heads down. So, we got to stay together and work as a team. We have to stay mentally strong,” said Yepez.

Yepez is one of the seniors on the team who have come a long way into building the soccer program into one that has character and fight according to Kuntz.

“These guys are fighting their rear ends off to try to get us somewhere. We got to get the younger guys not to look at ‘well we have next year.’ They need to look at right now. And that’s the challenge we have in front of us, to get them focused on the here and the now and execute,” said Kuntz.

Junior forward Kyle Fleming shares the sentiments of his teammate and coach, believing their play needs to intensify, but in no way is he looking to next year.

“We need to win the next three games and make the SCIAC tournament, that’s all it is,” said Fleming.

The level of frustration is rising for the Kingsmen as the season nears an end, but with execution and the right amount of fight, the Kingsmen can make a late season push and ride that momentum into the playoffs.