Hoarding isn’t a choice, but we can choose to support those struggling 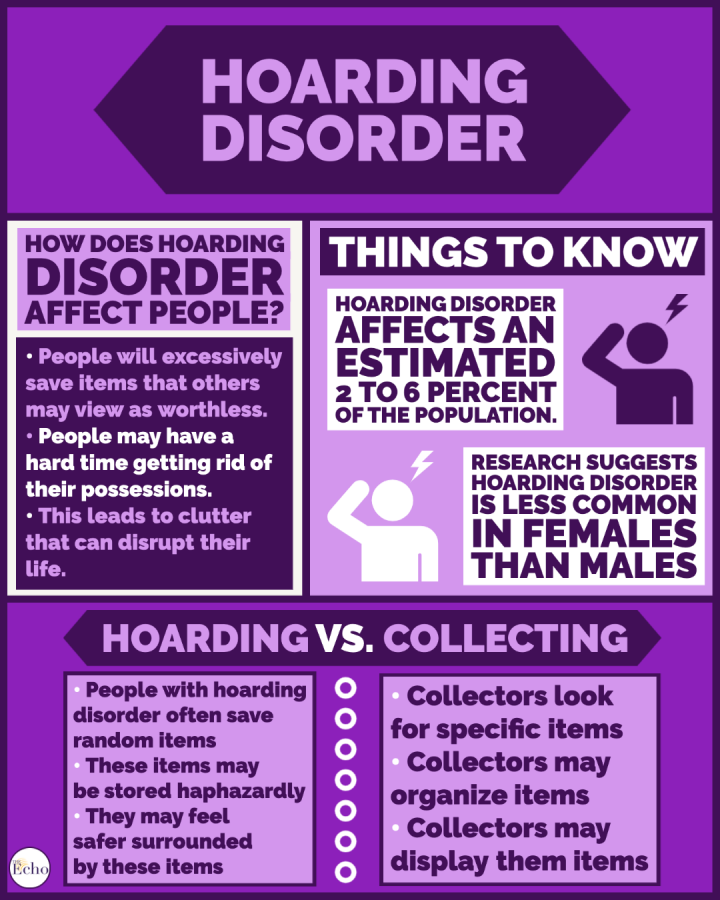 Since everyone is at home more often, many people have had the time to clean and make their houses look Pinterest-worthy. For some people, it takes more than just tidying up here and there.

People with hoarding disorder struggle to clean–more than you’d expect. We need to be understanding and help them.

My mother isn’t diagnosed with a hoarding disorder, but she was getting there during my childhood.

I hated messes growing up, and it was always an underlying issue whenever we argued.

Because of this, I did more research and watched many shows about hoarding during quarantine.

There’s a show on Netflix and Hulu called Hoarders that I spent a lot of time watching because it has an interesting way of showing how some hoarders live and how the disorder affects their everyday lives.

When I watch this show, it can make me overwhelmed to see people live this way, but I learned to understand there’s more to it than just blaming people for not cleaning up their mess.

After watching the show, I better understood my mom because I could see where she was coming from.

I also realized my mom’s hoarding habits aren’t anywhere near those of people who appear on these shows.

A hoarding disorder is more than how a person lives. It’s also a mental health disorder that is not easy to deal with.

You can’t just tell someone with a hoarding disorder to clean.

According to an article by Ranna Parekh, M.D., M.P.H. from the American Psychiatric Association, “two to six percent of the population” may be affected by hoarding disorder.

This type of disorder often causes people to grow attached to certain possessions. The item itself may have different value to the individual than the general population.

A specific symptom is “the needs to save the items and to distress linked to parting with them,” the article states.

There are types of hoarding besides item hoarding, such as animal hoarding, when a person has too many animals in an inappropriate and confined space that can be unsafe for the animals and the person.

Hoarding may also be comorbid with other disorders. The person may initially seek treatment for depression or anxiety before realizing they also have hoarding disorder, according to the Mayo Clinic.

Most people with hoarding disorder don’t realize the severity of their problem. Therapists usually try to get to know the patient by getting in touch with family, friends and even coworkers.

Being a hoarder may cause relationship problems, impact work environment and productivity, and can cause health and safety concerns.

People who visit a hoarder’s house–if they’re even let in–can see the problem, but the person with the hoarding disorder may not.

Turner said she “specializes in CBT/ERP” but hasn’t directly worked with someone with hoarding disorder.

According to the Mayo Clinic, it’s hard to address and treat hoarding disorder because hoarders may react in frustration to criticism for how they live. They may be in denial or lash out and try to prove that their condition is not a problem.

Usually people with hoarding disorder don’t need to be told to clean and the issue may not even be about cleaning specifically, but more about underlying issues. They may be feeling anxiety or depression and find comfort in surrounding themselves with belongings.

It’s hard to put a label on hoarding behaviors and analyze them as a black and white situation.

I can understand that dealing with a person who has hoarding disorder is frustrating, but we must learn to not place blame on the person.

Hoarding is a mental health issue that needs to be understood as such rather than written off as laziness or sloppiness.

Understanding and accommodating the person with the disorder is better than arguing or thinking you know what is best for them. Hoarding disorder is not something they can actively control, so we can only help people be aware of it.

Turner also said hoarding is a mental disorder, and you can’t tell someone who is a hoarder to just clean. If anything, this should be our main takeaway.