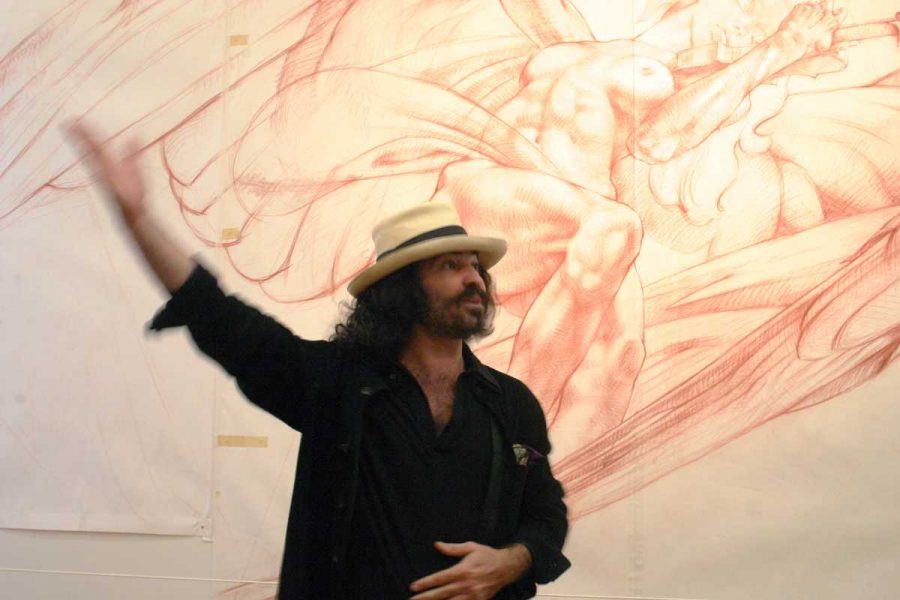 Famous artist Alexey Steele gave CLU the honor of displaying his large, award-winning drawings in the Kwan Fong Gallery in an exhibit entitled “The Big Picture.”

The exhibit, which runs from Oct. 6 through Nov. 26, is free and is being held along with TRAC2012: The Representational Art Conference.  Throughout the year, displays of artwork are circulated through the Kwan Fong Gallery which is open to all students.

“The Big Picture” opened Oct. 6. and on Oct. 16 there was an artist’s reception with Steele.  The Kwan Fong Gallery features a selection of Steele’s large drawings that were made for two of his dome mural commissions, “The Circle” and “The Soul of the Hero.”

His work is meant to show the working methods of an experienced artist. It shows the composition and the form before the commitment of painting to finish the piece.

In 2009, his work won Steele the Artemis Award in Athens, Greece “for celebrating the power and beauty of women through his art on a heroic scale in the modern world.”

Steele is best known for his outstanding work as a painter and for his advocacy for the role of fine art in modern society.

Michael Pearce, chair of the art department at California Lutheran University, is responsible for helping put the exhibition and reception together.

“Getting the art in the Kwan Fong Gallery was a bit of a challenge because it was so big,” said Pearce.  “Once the paintings were up on the walls, there were many ‘wow’ moments.”

Pearce also said Steele has not seen those works of art in about 10 years.  Therefore, once they were put up in the Kwan Fong Gallery, it was an honor and a surprise to the public and to Steele.

“I was incredibly excited about having Steele’s work shown in the Kwan Fong Gallery because I have always admired him as an artist,” said Pearce.

Steele, born in Kiev in the Ukraine, is the son of renowned Russian artist Leonid Steele. He began his early art training in his father’s studio.  Following his early training, he studied at the prestigious Surikov Moscow State Academy Art Institute. He later moved to Los Angeles in 1990 to continue pursuing his passion of painting large figurative murals.

The Kwan Fong Gallery is located in the Soiland Humanities Center and is open from 8 a.m. to 8 p.m. Monday through Saturday.  The gallery is open to anyone who wishes to view the works of art.

“I really enjoy having the privilege to walk in the Humanities building to see these beautiful works of art.  It really makes me appreciate my school and what they do to educate their students on the importance of art in our society,” said junior Marina Foté.

Steele has won many awards for his work.  He is a signature artist member of the California Art Club and has received a Silver Medal for the 1994 California Discovery Award.  In addition, he has received the Fine Art Connoisseur Magazine Award for best painting.

His capabilities rise beyond his artwork. He is also the founder of the Classical Underground – a performance platform that showcases the relationship between classical music and classical representational art.  Steele is also the co-founder of the annual Russian Heritage Festival.