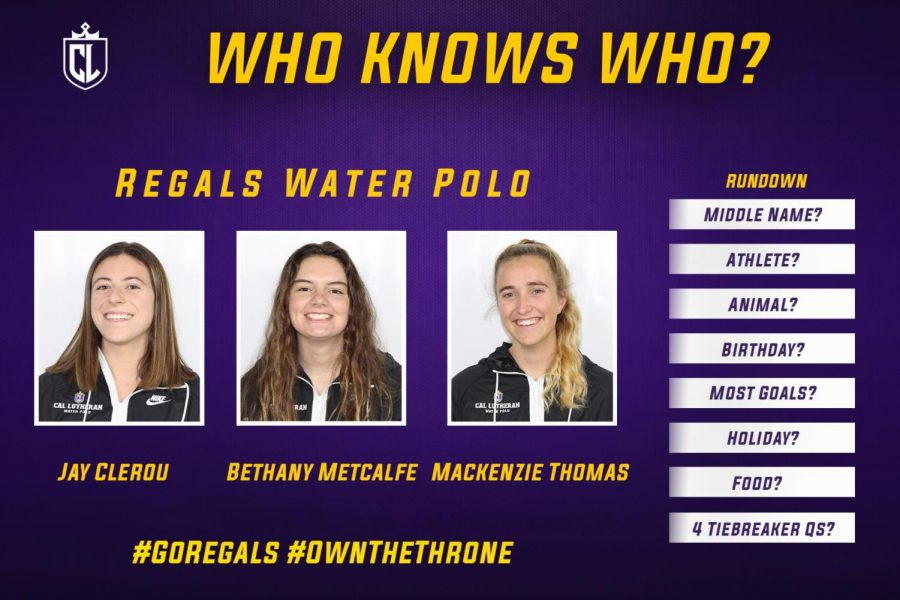 While the pandemic has continued to prevent many of California Lutheran University’s sports teams from meeting in person, Sports Information Director Ryan Jorgenson started a game show on the CLU Sports YouTube called Who Knows Who?

The game show, held via Zoom, pits two Cal Lutheran teammates against each other to see who knows the third teammate the best.

In a Zoom interview, Jorgenson said the game show was inspired by existing games the basketball teams played in their spare time.

“The basketball programs… they had a little game where they would ask two other teammates about what they knew and I was just like ‘that would be something cool during this time,’” Jorgenson said.

Sophomore Kingsmen Football players Cheyne Caldwell and Randal Voutt competed against each other to try to guess information about junior player Connor McDermott.

“We just got an email asking if we were down… me and Randal, we were asked questions about Connor,” Caldwell said. “It’s a little bit competitive. You get the competitive atmosphere of [the] football team.”

Jorgenson said he writes the questions to be challenging and they’ve lived up to that standard as no player has gotten more than six out of seven correct answers so far.

“I try to not to get too personal, but I try to come up with questions I think will be a little bit challenging, a little tricky,” Jorgenson said.

Jorgenson said the main question that has tripped players up is middle names.

Jorgenson said he aimed to make the game fun and also offer the chance to help players socialize during the pandemic.

“At first I didn’t really think it would [make us happier], but in a way it kinda did,” Voutt said. “I hadn’t gotten to talk to them much due to Covid, so I was happy to talk with them again.”

“Zoom is honestly great since we can’t be on campus together… just the interaction is super beneficial,” Caldwell said.

Jorgenson plans to continue creating these videos as time permits. Caldwell said he hopes to see more than one per team compete in the future.

“We can build off it, honestly, it’s really fun to do,” Calwell said. “I’m sure the other players on the team would love to do them.”

You can check out the videos now on the CLU Sports official website under the “Recent Videos” section.