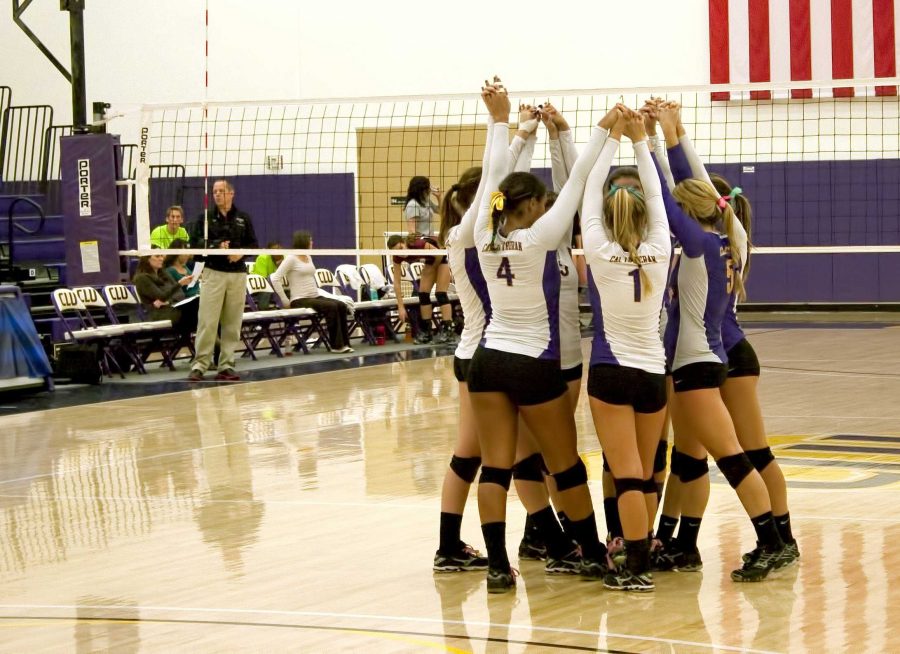 Title town CLU: Above, the Regals prepare for a game against Chapman. The Regals only dropped one game in conference this year. Below, Kylie McLogan prepares for the Chapman game. Photos by David Lopez - Sports Editor

Even though the CLU volleyball team stumbled in the third game, losing 24-26, the Regals handled the University of California Santa Cruz in the other three games 25-15, 25-18 and 25-22.

The California Lutheran University Regals took on the UCSC Banana Slugs on Saturday, Oct. 27, in the Gilbert Sports Arena.

From the looks of the first game, it seemed as though this match up would be an easy three-game triumph, adding a win against UCSC under the Regal’s belt.

However, from the second game on, the Regals had to really step up to the plate.

The second game against the Slugs was a struggle back and forth, and at one point making the game was tied at 10-10.

Senior middle blocker Shannon Pearson took advantage of the over pass and slammed the ball on the other side of the net, without anyone even getting close to digging her kill.

From that moment on, the Regals got their heads in the game and pulled forward to finish off the game.

Game three took the Regals by surprise with a loss. The Slugs did everything they could successfully to make sure no ball hit the floor.

“We knew that UCSC was gonna get a lot of balls back and we had to be ready for long rallies,” said sophomore outside hitter Kylie McLogan.

McLogan played her part against the Slugs and recorded 12 kills and 10 digs.

However, the top scorer of the night was freshman outside hitter Allie Eason with a season high of 18 kills and the team high of 24 digs that match.

Junior middle blocker Lauren Rohach had an excellent game, racking in 14 kills with only one error.

Game four was a back-and-forth battle between the two teams. The Slugs were trying to advance to the fifth game, and the Regals were ready to end the match.

The Regals came out with the win.

The defense played a vital role in the win since both teams would not give up without a fight.

Senior libero Rachel Smith dominated the back row with 21 digs.

Sophomore defensive specialist Kennedy Peters not only rocked the back row with 16 digs, but she also scored five service aces, which is hard to accomplish in college ball.

The Regals are once again your SCIAC champs, beating out Chapman in Friday’s game, and proving that they are still the best in our league.

“It’s great to win another championship. The girls have all worked so hard this season and it is so fun to have something to show for it,” said McLogan.

Chapman is now second, and La Verne takes the third spot to round out the top three of the SCIAC.

Being ranked No. 1 in SCIAC going into the conference tournament is a position all the Regals can celebrate.

“It’s really exciting to be SCIAC champs,” said Eason. “It’s crazy the regular season is over already and I’m so happy to end it with a title.  But we still have a lot more to accomplish this year.”

The unfinished business Eason is referring to is the SCIAC tournament, which CLU is hosting this Thursday and Saturday.