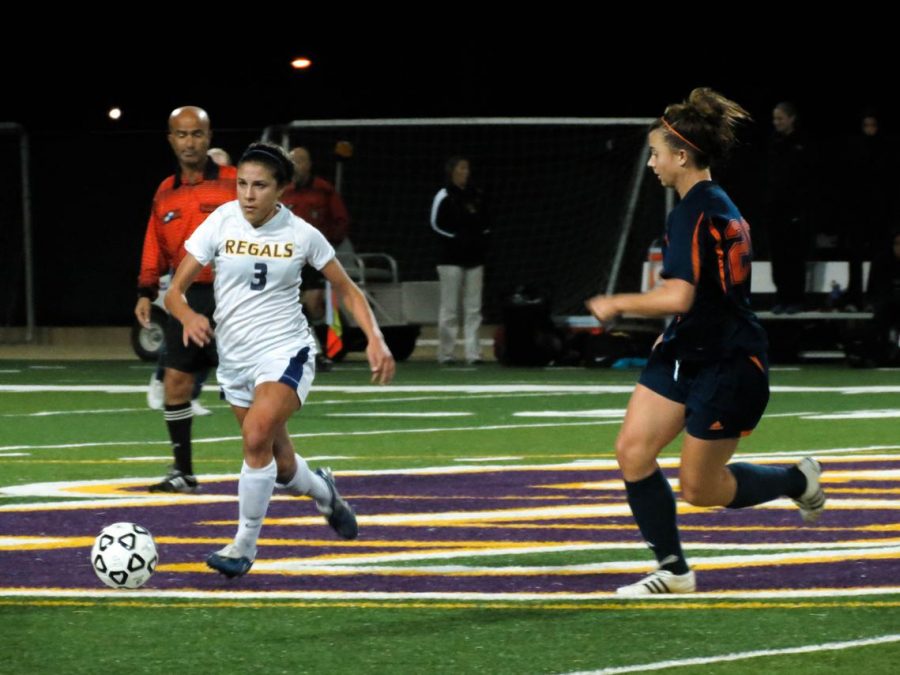 The Regals soccer team didn’t make it to the NCAA regional tournament the easy way.

The Regals seemed to be on a clear path to the postseason after being crowned SCIAC champions, but took a step backwards after losing in the first game of the SCIAC Tournament to La Verne, 2-1.

The Regals defeated Pomona twice before in the regular season. The team made sure to prepare for the situation the best they could. The night before they practiced at 8 p.m. to make sure they were ready for the game-like conditions.

“Going into the game we knew how much was at stake, so we were prepared for a battle,” said Taylor Will. “We had great energy to start off the game. I felt like overall we were ready to get it done.”

The Regals didn’t allow the Sagehens to control the ball in the beginning of the game. The Regals were passing the ball and working their way up the field like they had done all season, but were struggling to put together the finishing touches.

“The first half we had outstanding possession and I thought the movement up top just wasn’t working. But with the energy being so high I was really surprised we didn’t put one away,” said Will.

The defense was impenetrable and for the first 36 minutes of the game did not allow any shots by the Pitzer squad. The Regals came very close on one cross put right to Bailey Marquez who missed just high over the cross bar.

The first half ended 0-0 but the Regals quickly went to work at the start of the second half. In the third minute of the second half, senior Mayra Virgen sent a ball right to Nicole Rains who took one dribble and fired a shot, connecting with the back of the net to send the Regals up 1-0.

“When we connected to feet, the game opened up and allowed us to make runs off the ball to get in behind their defense,” said Rains.

“After I scored, everyone was so excited and we came together as a team to push each other to do whatever it takes to win the game.”

The Regals were excited after the score by Rains, but seemed less aggressive than they were before the score came.

The Sagehens went into attack mode and were pushing the ball up the field much more aggressively than in the first half. In the 66th minute, a cross by Pomona’s Claire Mueller came into the Regals goal box and a header by Sam Thompson went right toward the goal. The ball deflected off the cross bar and was headed in by Julie Dohner off the deflection for the Sagehens’ first goal of the game.

In the 77th minute, Will headed a ball right over the last defensive line to Virgen who narrowly missed the shot with the ball deflecting off the left post.

“We didn’t put our opportunities away and it was unfortunate. I felt like we knew we were up so we sat back just a little and they snuck up on us,” said Will.

Regulation time came to an end with the score tied at 1-1. Just like the Regals had done early in the second half, the Sagehens came out firing and made quick work with their offense. In the 94th minute of a cold and damp night, a seemingly routine save for goalkeeper Kristin Bailey caught her by surprise. The ball slipped through her grasp and rolled passed the goal line sealing a victory for the Sagehens over the Regals 2-1.

“It was a shocking loss,” said Virgen. “We’ve had a great season but sometimes the better team doesn’t always win.”

“The score did not reflect our effort as a team collectively, but we know that we left it out on the field and that’s all we could ask of ourselves,” said Rains.