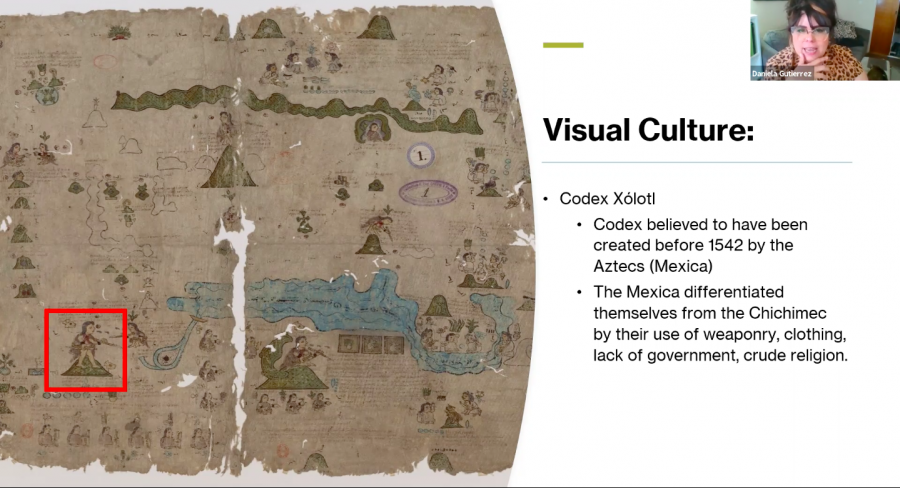 Daniela Gutiérrez, art historian at Cypress College and Ph.D. student of cultural studies at Claremont Graduate University, dove into her research on the representation of race and identity in Colonial Mexico through illustrations of Spanish church murals and Aztec codices in her virtual presentation, “The Chichimec in the Aztec and Spanish Imagination.”

The Jan. 28 presentation was part of the William Rolland Gallery of Fine Art’s Virtual Lecture Series,

Gutiérrez said her interest in the Chichimec people began with a visit to a colonial church in the state of Hidalgo, Mexico.

She said the colonial churches are extravagant in their interior architecture, which includes gilded decor. What caught her attention, however, were the murals lining the walls depicting different battle scenes. Many of these murals show Indigenous warriors with weapons fighting each other while semi-nude.

“[It’s] all very uncommon… to have dismembered bodies is not the thing for Catholic churches,” Gutiérrez said. “The common theory that historians have come up with is that we’re looking at a battle scene between the local Otomi tribe and the Chichimecs.”

The Chichimec, an Indigenous tribe that bordered the northern edge of the Aztec empire, were primarily recorded in Aztec writings.

In her presentation, Gutiérrez showed an Aztec manuscript, the Codex Xólotl, with different glyphs that depicted the towns in their empire.

“They talk about the aspects of who they [the Chichimec] are and really try to belittle them in a lot of the records,” Gutiérrez said. “This is really important because if we’re studying Chichimec history, we’re understanding it through the Aztecs. So unfortunately the Chichimec are not able to tell us about their religion, not able to tell us about their customs or the way that they live, we’re perceiving it through this Aztec lens.”

Rachel Schmid, curator of Collections and Exhibitions for the William Rolland Gallery of Fine Art, said in a Zoom interview that there was a lot to learn from this presentation and its depiction of a group of people through the lens of another.

“This really fit the build because not only was it a non-western perspective, it was coming from an Aztec perspective of a different group of people entirely,” she said.

Gutiérrez said because of the Aztec’s level of sophistication and control of the surrounding tribes and land, they were able to create their own historical accounts of the tribes in their empire.

Their failure to force the Chichimec under their control, however, is what began the evil portrayal of the Chichimec.

After the fall of the Aztecs by Spanish conquest, theocracy became the new method of control over the Indigenous population. Gutiérrez says that along with the conquistadors came many different missionaries, all with a different understanding of the native people.

“One of the biggest agendas that the Spanish had when coming to the new world was the evangelization of the Indigenous population,” Gutiérrez said. “By converting people to Christianity, it really got them closer to their goal of transforming them into Spanish subjects.”

During her presentation, Gutiérrez focused on the narrative told through the perspective of Christians who followed the Augustinian rule. She said for them, controlling the Indigenous meant they were creating a society as God had envisioned it; those who accepted Him would be on the right side, and those who rejected Him would meet violent ends and remain in the clutches of evil.

Gutiérrez showed images of Spanish art that villainized the rebel natives, depicting their Gods in dark colors and fearsome poses.

The Chichimec had resisted the control of the Aztecs and continued resisting the Spanish empire, which came to represent something larger in the eyes of the church.

To the Spanish missionaries, the Chichimec now were associated with evil forces, Gutiérrez said.

“So if we go back to the murals here, it does help to understand now looking at the murals that we’re not just looking at a regular battle between the Otomi and the Chichimec,” Gutiérrez said. “One of the main theories is that we have this Otomi tribe who had recently converted to Christianity. So what we see here is a battle between good and evil.”

Gutiérrez said the Chichimec tribe is remembered as nothing more than a symbolic representation of evil whose only function was as a type of propaganda for Christianity and its superiority.

“I hope that there is a lot to take away from the lecture because there is so much of the base of our Mexican culture that is from the Nahuatl, the Chichimec, and non-Aztec civilizations,” Schmid said. “There are so many ways that we still have influence from this empire.”