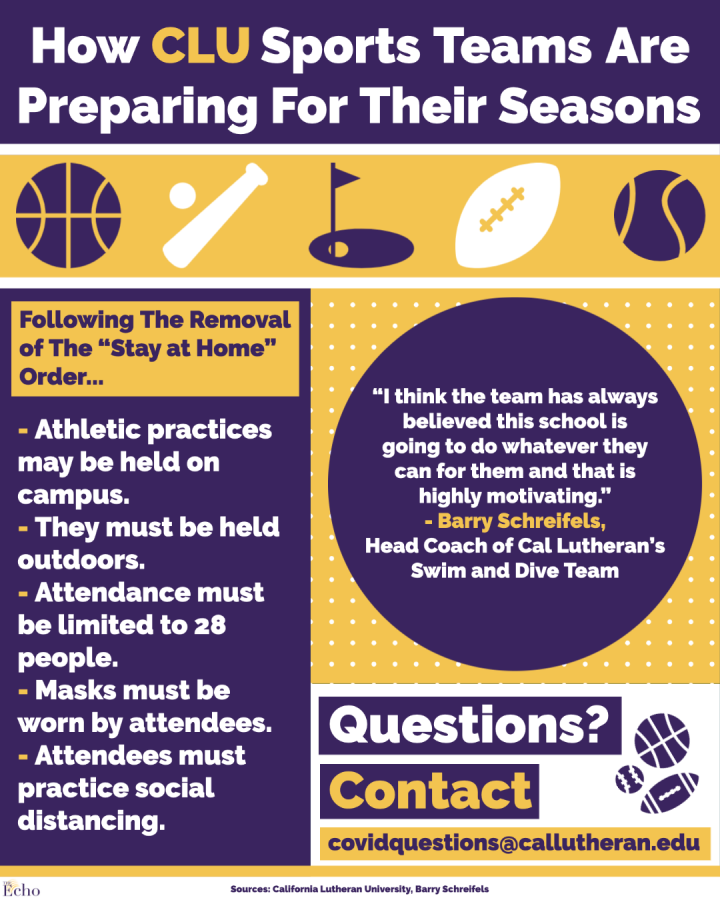 Almost one year after COVID-19 shutdowns swept the nation, state and county health guidelines are making some collegiate sports possible again. Coaches at California Lutheran University have strived to keep their athletes connected and prepared as they await a green light to return to play.

According to the Cal Lutheran KNOW webpage, the athletics department is “committed to providing athletics activities during the spring semester as allowed by public health and NCAA guidelines.”

Kingsmen Basketball Head Coach Russell White said in a Zoom interview that his approach has been to be honest with his players because he doesn’t want to give them false hope, but he does his best to keep them engaged and their spirits up.

“Personally, I was trying to check in with our guys every two weeks on a personal phone call or personal Zoom,” White said.

White said he started a “Fall Olympics” for his players to feel connected during the pandemic. Some of the activities in the Fall Olympics included disc golf and going to the pool by Grace Hall.

White said he has put in a lot of effort to keep his players feeling connected during a time that forces so much distance.

Barry Schreifels, head coach of the Swim and Dive team, said in a phone interview that the Cal Lutheran pool has been open since July, allowing his athletes to continue their conditioning and preparation.

Schreifels said he has seen a great deal of commitment from some of his athletes. He said a group from the team goes to the pool and swims together almost every day.

“Swimmers get better because they challenge each other every day in the water,” Schreifels said.

Shriefels said that because of the determination and commitment he’s seen in his team, when they are able to hit the pool safely as a full team again, they have a good shot for their season.

“I think you have to deeply believe it’s going to get better and then everything that comes out of that is positive,” Shriefels said.

While the William Rolland Stadium has been closed to students, Miguel Ruiz, head coach of the Kingsmen soccer team, said in a Zoom interview that he has had to create a different approach in preparing the team.

Ruiz said one of his new coaching methods is “walking through Zoom meetings going over formation and tactical stuff” as well as using Zoom to look at past game film to brainstorm new ideas and problem solve for the upcoming season.

During the pandemic, Ruiz has kept in mind “making sure the guys know that you’re still there, that we do have a goal, and that things are going to get better.”

Schreifels, White and Ruiz agreed that Cal Lutheran has been doing a great job of trying to get their athletes back in action.