CLU Sports aim ‘to protect everybody’ in effort to resume competition 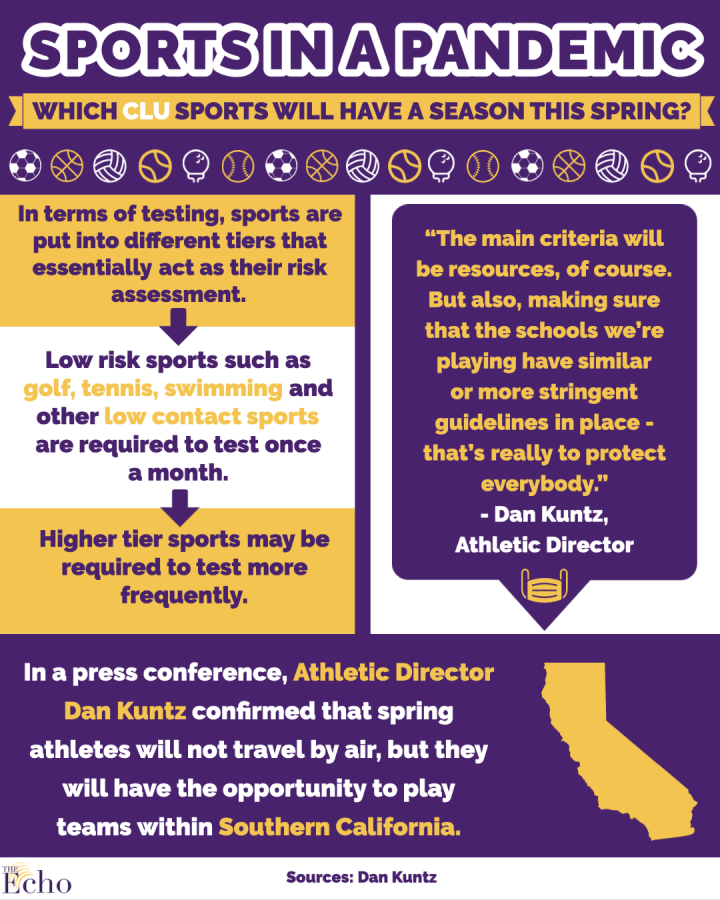 While many professional sports have carried on during the pandemic, the fate of collegiate competition remains undetermined and not all teams at California Lutheran University will be able to compete until COVID-19 restrictions ease.

In a phone interview, Kelli DiMuro, head Regals Basketball coach, said the Southern California Intercollegiate Athletic Conference cancelled all women’s basketball games for the season, but she is hopeful that the Regals will be getting back on the court soon.

“As soon as the city [of Thousand Oaks] opens up, we are allowed to start scheduling six to eight games and then we’re starting practice, hopefully on… [Feb. 8].” DiMuro said.

Games and practices have been cancelled for Regals Basketball since March 2020, when county and state COVID-19 ordinances were first announced.

DiMuro said if nearby counties open up in the near future, the Regals Basketball team would be permitted to travel and play games, but would be restricted to a 100-mile radius and would only be able to travel by bus.

In a press conference, Athletic Director Dan Kuntz confirmed that sports returning to play during the spring semester will not travel by air, but they will have the opportunity to play teams in Southern California.

“The main criteria will be resources, of course,” Kuntz said. “But also, making sure that the schools we’re playing have similar or more stringent guidelines in place–that’s really to protect everybody.”

Davis said she and her staff have been working closely with Cal Lutheran Health Services to ensure that they can create a safer environment for athletes.

“We are being guided by California Higher Education protocol and the NCAA,” Davis said. “Every athlete will be tested at a minimum of once and then twice during practices–once we start competition, those variables will change a little bit and we’ll be testing more.”

DiMuro said the Regals Basketball team already has a plan in place that adheres to the university’s COVID-19 guidance.

“48 hours before a game we have to test and everyone has to test negative before we go into a game–if we were practicing six days a week, we’d have to test twice a week,” DiMuro said.

Right now the Regals Basketball team is only testing twice a month. DiMuro said she is currently trying to implement “pod practicing,” which would split the team into groups of four to five, mitigating any chance of a mass outbreak if one of the players contracts COVID-19.

Jeff Lindgren, head coach of the Kingsmen and Regals Golf teams, confirmed that they may be able to start getting back to a normal schedule in the coming weeks.

“Right now we’ve got five tournaments on the docket for spring. We’re hoping that all goes well and that we’re able to get to all five of those,” Lindgren said in a phone interview.

The SCIAC golf season was cut short last spring. Their first tournament this year is set for the end of February, but they will be restricted to playing within the state of California.

Practicing is a little different for golf, however, since it is such an individual sport. The Regals and Kingsmen Golf teams practice off campus and thus have greater access to facilities than sports that rely on Cal Lutheran facilities.

Lindgren shared that the team will follow state and county guidelines for athletic competition.

While the team is not permitted to hold officially sanctioned practices, golf courses have remained open throughout the course of the pandemic and players are able to go if they feel comfortable. Lindgren said the courses have actually been very busy since more people are working from home and golfing is one of the few activities that has remained open.

While many spring sports will have the opportunity to compete, fall sports will await the upcoming fall season for official competition.

In an email interview, Miguel Ruiz, head Kingsmen Soccer coach said their next true season won’t begin until fall of this year. However, they may have a chance to play some non-conference games this spring.

“We are hoping to start practicing this month once all the COVID protocols are met. Games will be in March and April,” Ruiz said. “Most of our athletes will be participating in practices this spring here on campus.”

Kuntz said the Cal Lutheran Athletics Department is taking all necessary precautions and monitoring state guidelines and restrictions as they continue to change.

“Within the conference, you know, our institution, the university and our leadership has made a choice, and a decision to allow our athletes to engage and to come back and to do things that is different than most of the conference schools,” Kuntz said. “And that speaks highly of, I think, of what we’re, what is important in the values of our institution.”