‘Voices of the Nation’ Poetry series: driven by the force of love 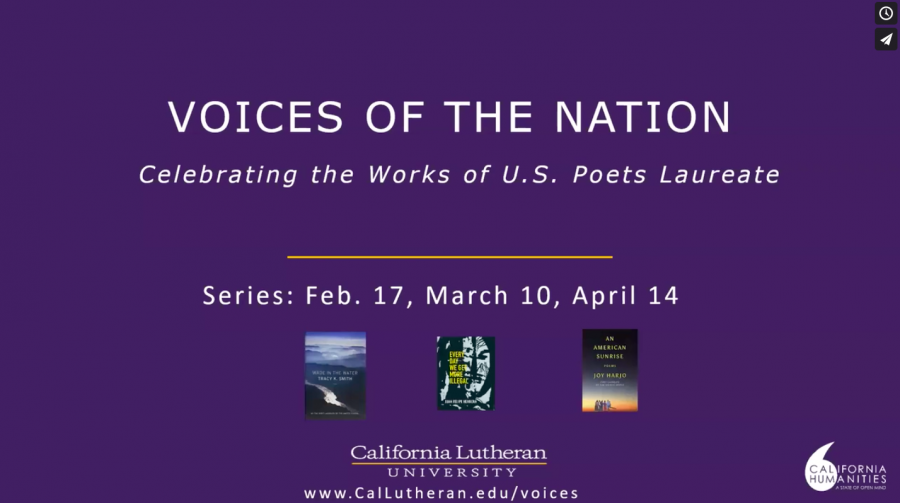 The Voices of the Nation Poetry series is hosted by English professor, Jacqueline Lyons. She hopes the seres will educate students on the various voices poets have across the nation.

“The three poets in this series all have a commitment to truth-telling, to amplifying marginalized voices, and to raising the national consciousness towards greater equity and compassion,” Cal Lutheran English Department Chair and event host Jacqueline Lyons said in an email interview.

Lyons said her idea for this series stemmed from her proposal of a new course for Cal Lutheran’s University Honors Program that aims to educate students on a range of poetic voices from various backgrounds by sharing work from national poets. This poetry series was a way of connecting students from this course and their exploration of poetry with a larger community. She said this was made into a series instead of a single event in order to sustain engagement between poetry and the community throughout the semester.

Tracy K. Smith’s book of poetry is meant to strengthen the weaknesses she sees in her racial community. “The undoing of racism requires first a complete and total reckoning with the violence of racism as portrayed clearly in ‘Wade in the Water.’”

During the event, Mason argued that Tracy K. Smith’s poetry captures both a violent and loving America, which contributes to the concept of the walking negative or “theory of racistness.” Mason compared her concept of a walking negative to a negative in photography, where black and white are the only colors seen. Some people view race through this lens and Mason argued that Smith’s poetry brings attention to this perception and encourages her audience to rethink this viewpoint.

“Her poetry inspires its readers to think about how racism and one’s own prejudice influences how they read people and how they read skin color and other phenotypic characteristics,” Mason said during her presentation.

In the poetry event, Stockard broke down a review written by Adrianna Smith from The Atlantic that speaks on Tracy K. Smith’s poetry book “Wade in the Water.” Adrianna Smith wrote that a number of poems from the book are based on letters from African Americans who served as soldiers in the civil war and capture the insight of wives, parents, children and white family members.

“These are poems that draw on witty subjects and draw on ideas of belonging from United States dark chapters of slavery to present day acts of violence,” Adrianna Smith wrote in her review.

Tracy K. Smith stays true to the language in these letters and creates erasure poems, which is a form of poetry where one can selectively erase the words from an existing text to create a new story. The words she chooses to keep in these texts work together to bring out the marginalized voice from underneath.

“Through these poems she offers a blueprint for how America can better listen to the country’s long-buried voices and to its voices in the margins now,” Lyons said.

Lyons said she was drawn to Tracy K. Smith because Smith’s explorations of racism and injustice are driven by the force of love.

“Love as resistance to past and present injustice, love for family, love as protection for the physical planet… and love as patience and compassion that one must practice,” Lyons said.

Lyons said she hopes this series serves as a warm welcome to those unfamiliar with the work of recent poets laureate and deepens the understanding of those who are familiar. She said poetry can help us exercise and strengthen our imaginations as the world struggles to treat one another with love and respect.

“Poetry offers us shelter and beauty; it can also nudge us out of our ruts and habits, and urge us toward better ways of being in the world,” Lyons said in an email interview.