Some faculty receive COVID-19 vaccine: ‘one step further toward some degree of normalcy’ 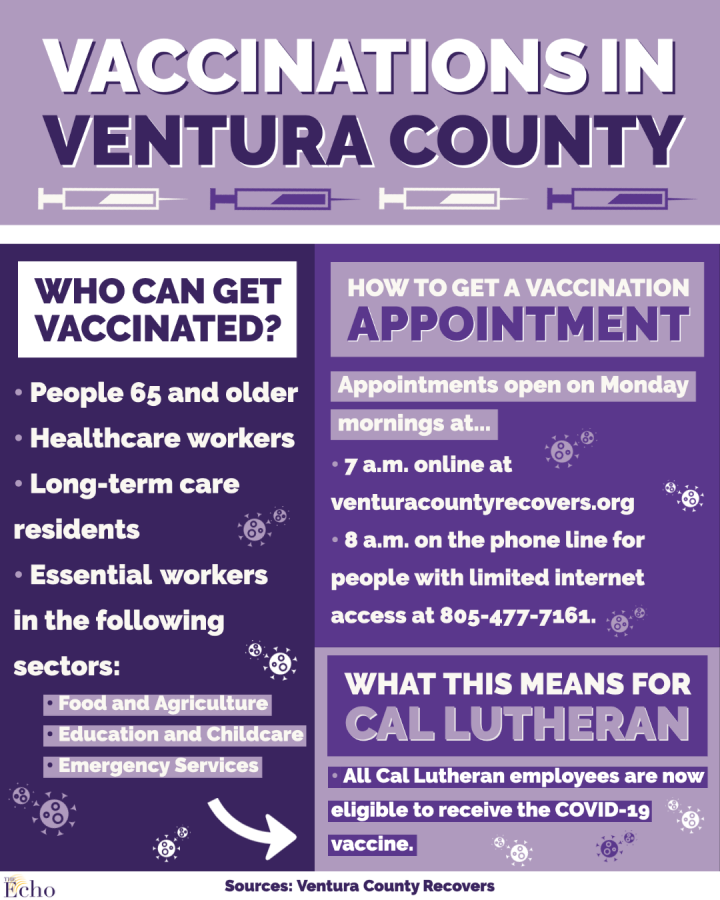 Some faculty, staff and student employees at California Lutheran University have received at least one dose of the COVID-19 vaccine.

On Feb. 24, Ventura County moved to tier 1b of vaccine rollout, which includes individuals 65 and older and essential workers in the food and agriculture, education and childcare and emergency services sectors.

“It means I can have a little less worry about being around people,” Professor of Communication Russell Stockard said in a phone interview.

Another faculty member who has been vaccinated is Michael Arndt, professor of theatre arts. He said receiving the vaccine has made him feel safer around the people he comes in contact with.

“It’s progress. It makes me feel a bit safer and closer to being able to communicate not only with my students but my friends and family,” Arndt said in a phone interview.

Arndt and Stockard both said going back to how things were before the pandemic is important.

“I am glad to get one step further toward some degree of normalcy,” Arndt said.

Stockard said he is glad he can feel safer being around students.

“I think all the vaccines basically say, well, it doesn’t mean you won’t get infected it just means you won’t get very sick… you won’t get sick to the point of being hospitalized,” Stockard said.

Getting an appointment was easy for both professors with Cal Lutheran’s help, they said.

“Once it was opened up, I mean it was difficult initially to get an appointment I actually signed up for another appointment and then Cal Lutheran faculty were given this opportunity to work with the Simi Valley Unified School District and I went on as soon as soon it was posted and got an appointment right away,” Arndt said.

Both professors said that they had no side effects from the vaccination and are doing well.

Vaccination appointments for those in tier 1b can be made at venturacountyrecovers.org.

According to the CDC, the most common side effects from any of the vaccines are fatigue, pain at the injection site, muscle pain, headache, chills and fever.

Any severe side effects should be reported through the Vaccine Adverse Event Reporting System.

On Feb. 23, Cal Lutheran announced that its Health Services have been approved “to receive and administer vaccines on-site when supplies become available.”

On March 8, the Centers for Disease Control and Prevention released new guidelines about what those who have been fully vaccinated are permitted to do.