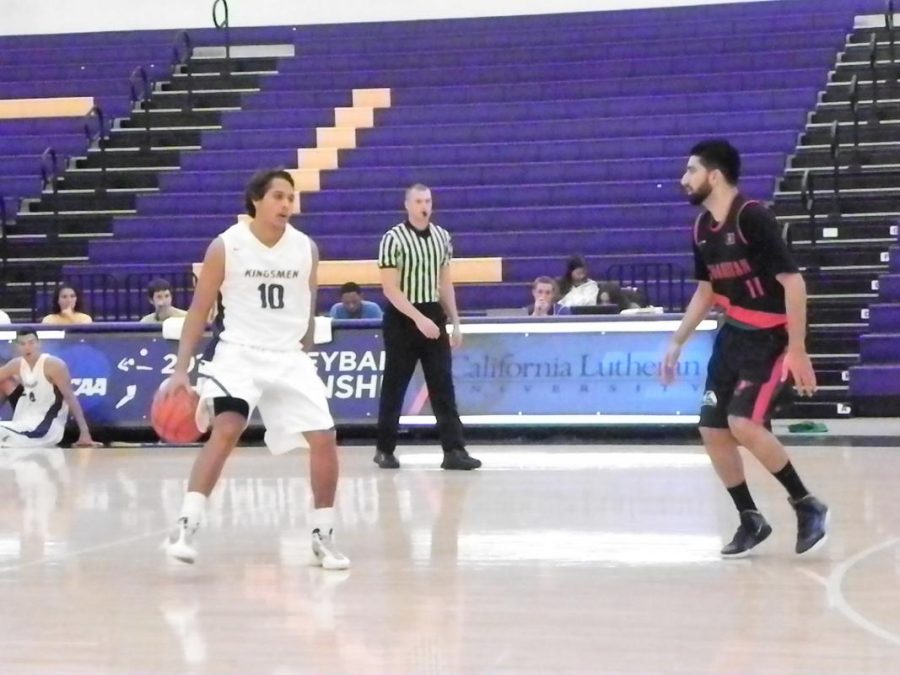 The Kingsmen faced off against the Afghanistan National team in a pre-season exhibition match Sunday, Nov. 11, in Gilbert Arena.  Cal Lutheran came out victorious after a game-winning shot by senior forward Jayvaughn Nettles to lead them to a 52-50 victory.

The Kingsmen got off to a slow start, missing their first three shots of the game by a significant mark. However, as minutes passed, the Kingsmen bodied up on defense and made better decisions on offense to put them atop the Afghan squad early in the game.

Despite being undersized and underweight, the Kingsmen dominated the paint in the first half. Redshirt sophomore forward Jeremy Sulker-Hall anchored the postgame for the Kingsmen, weaving through the Afghan defense while recording 10 points in the contest.

Sulker-Hall was fed the ball all night with precision passing by junior point guard Steven Davis and junior guard Collin Knudsen, who led their team in assists.

A defensive effort led by Nettles and Sulker-Hall made it difficult for Afghan players to get any offensive rhythm flowing.

CLU’s transition defense was stellar, while they totaled five steals and four blocks throughout the game.

After an Afghan time-out with 8:31 left in the first half, the Kingsmen were slow to keep up the pace. Guard Safi Mojaddidi ran the floor, bringing the Afghan team within two points of the lead. CLU was cooled off momentarily by hot shooting from Afghan forward Billal Azizi and Mojaddidi. Both players totaled 19 points.

However, the Kingsmen were quick to recuperate.

Timely scoring by freshman center Cody Williams and Sulker-Hall kept the Kingsmen on top. Davis took advantage of the sloppy Afghan defense, stealing balls at will towards the end of the first half.

At halftime, the Kingsmen led the Afghan National team 27-22.

The Kingsmen wasted no time pressuring the Afghan offensive by applying immediate force to their new offensive strategy.

Davis’ aggressive play set the tone on defense for the Kingsmen right out of the gate, which forced Afghan turnovers. Driving the ball strong to the hoop also drew numerous Afghan fouls, which led to CLU scores.

After another Afghan time-out with 14:18 left to play in the second quarter, scoring was a rarity. Both squads stepped up their defensive schemes, which attributed to their halftime adjustments.

Nearing three minutes of scoreless play, Nettles turned on the gas and went to work. He quickly drained two three-point shots and flipped in a fancy finger roll, totaling five points in one minute.

Forced shots by the Afghans put them in a hole towards the end of the second half, but somehow crept back with offensive efforts from Mojaddidi behind the arc, bringing Afghan within one point of the lead.

With three clutch free throws made by freshman forward Guy Lynott, CLU held onto the lead. But an easy Afghan layup tied the game at 50.

Fortunately for the Kingsmen, Nettles found himself with the ball with 19 seconds remaining in the game and nailed a fade-away jumper to put a CLU victory in the books.

“We actually had a designed play for that type of situation,” said Nettles. “What happened at the end wasn’t drawn up, it was just spur of the moment. We just improvised and made a good basketball play and fortunately my crazy shot went in.”

Nettles recognized the importance of playing such a diverse, talented team.

“Playing a team like that is good for us because they are older guys and they’ve played overseas. It really gives us a chance to see where we are and what we need to work on. And with them playing every team in our conference, it tells us where we are,” said Nettles.

Head coach Rich Rider shares the same outlook on the season as Nettles. Rider entered into his 19th season with a young, diverse roster that he believes has many kinks to work out, but will ultimately be successful.

“We know we are young and we are going to make some mistakes, which we did,” said Rider. “But we feel good. We saw some good things out there. You have to go through these growing spurts and we’re in one right now. The upside is there.”

Rider varied his offensive attack with a mixture of players on the court throughout the night.

“The [young] guys did some good things, but at the same time they reverted back to some mistakes,” said Rider. “But right now I’m pleased. We are making progress and that is the key.”