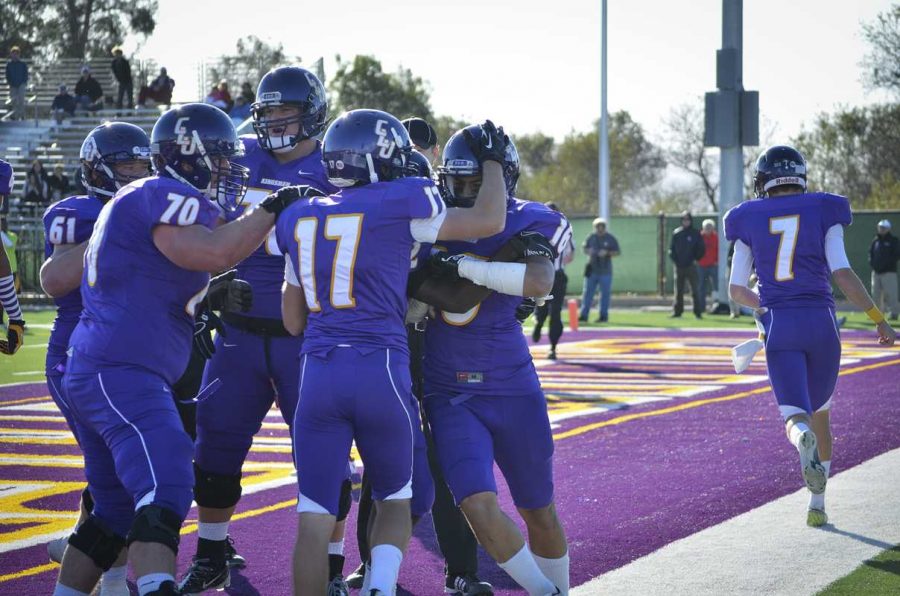 Four in a row: Above, Kingsmen celebrate a touchdown by Donald Senegal. Below, Romello Goodman breaks out for a run. The Kingsmen won their fourth straight SCIAC title. Photos by Alexis Avila - Staff Photographer

The Kingsmen football team celebrated “Gangnam Style” after they tore through the second half against Chapman to win the SCIAC championship.

“We just went ‘Gangnam Style’ and got pumped up. We came out firing,” said senior Eric Rogers about halftime and the Kingsmen’s second-half performance.

While the team partied, the seniors had something more to appreciate and experience. Perfection.

For four years the seniors have been perfect in SCIAC play. They have won four SCIAC conference titles and experienced the NCAA playoffs for four years running now.

“It’s a great feeling, but we want to set history here,” said Rogers. “We want to get past the second round and once we do, make that run to be in contention for the national title.”

They’ll get the chance to make history at home.  Every time these seniors have experienced playoff football, it has come on the road.  The Kingsmen are set to host North Central Illinois this Saturday.  If CLU wins they could potentially face Linfield the following week.  Linfield is facing off against Pacific Lutheran University this week in the bracket above California Lutheran University.

The Kingsmen (8-1, 7-0) put up 31 points in the second half to win the SCIAC title outright. The victory didn’t quite start out the way they wanted, with a few ups and downs throughout the first half.

“We knew they were going to come out firing and they did. They threw the whole kitchen sink at us,” said freshman Romello Goodman.

Romello Goodman came out on the Kingsmen opening drive with a big breakout run deep into Chapman’s side of the field. The Kingsmen scored on that opening play to take the lead 7-0 but that was to be the only score the Kingsmen made in the opening half.

Meanwhile, the Chapman offense hit the ground with a heavy running game.

Al White and Jeremiah McKibbins switched off running the ball through the CLU defense that struggled making tackles throughout the first half.

“We had three drives that crossed the 500-yard line and we had to punt. That’s not the way I like to play football,” said McEnroe. “We are going to be a different team next game, defensively that is. We are going to make sure we tackle starting from the first play and not let them slip away.”

The Kingsmen went into the locker room at halftime with weight on their shoulders. They needed something to get them fired up and turn the tides.  It came in a bit of a non-traditional way, but seemed to light the fire for the Kingsmen.

“It was a lethargic first half with not a lot of energy. We came in at halftime and told them to tackle better and to finish drives and then turned on that stupid Korean song and danced,” said McEnroe.

“That gave us our energy back and fired the guys up. That was our halftime speech. It’s not exactly Knute Rockne, but he never had techno I guess.”

The opening drive of the second half for CLU was exactly what McEnroe was looking for from his offense. Rogers caught a 32-yard touchdown pass from Zach Shultis, tying the game 14-14.

Chapman answered with a strong drive, ending in a 6-yard touchdown reception by Robin Harris to go up 21-14. CLU seemed to have enough of the back and forth nature of the game. The Kingsmen started hitting the play-making buttons, using the hit stick and squeezing the sprint trigger.

The Kingsmen scored 24 consecutive points with two touchdown catches by Donald Senegal and a 34-yard touchdown run by Romello Goodman that put the icing on the cake for the Kingsmen.

With the final score of 38-28, CLU clinched the SCIAC’s automatic playoff berth in the NCAA playoffs for the fourth year in a row, while denying Chapman entry to the playoffs for the first time in their school’s history.

McEnroe is optimistic and expects them to be back in the line up and ready to go for the first round of playoffs.

Shultis had another careerpassing day going 28 of 39 for 294 yards, four touchdowns and only one interception. Romello Goodman rushed for 161 yards on 22 carries along with five receptions for 45 yards and a touchdown.

“To go four years with these guys, its all about the kids. It’s about our system and the beliefs in our system. Buying into them and executing,” said McEnroe. “I love these guys to death, every single one of them.”