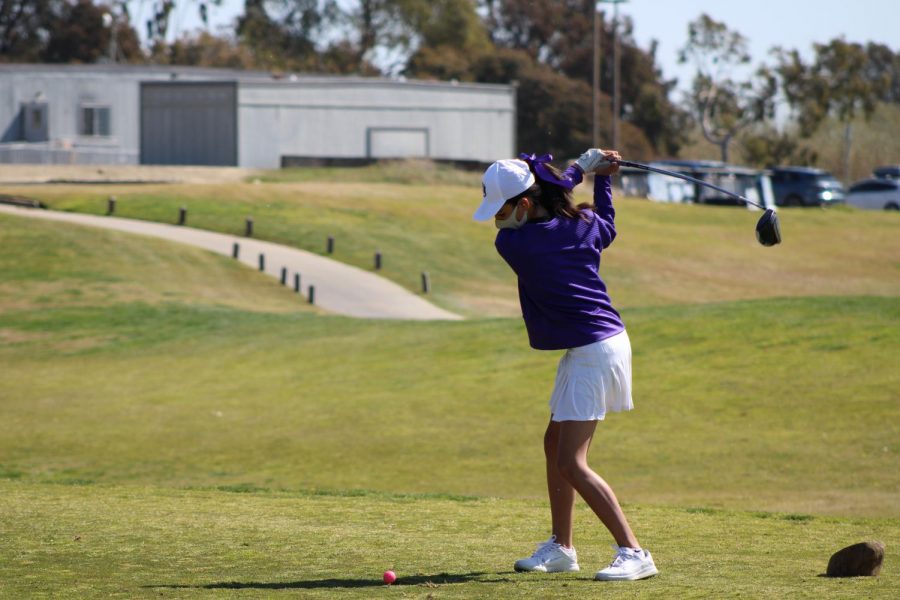 Sophomore Regals golfer, Anna Bello driving on the first whole at Olivas Links at their first tournament of the season.

The California Lutheran University Kingsmen and Regals Golf teams made their mark during their first week back on the course in about a year.

In their first tournament of the season, both golf teams ranked in the top 10 out of 25 in the nation, with the Kingsmen coming in at number 5 and the Regals ranking at number 7.

“It’s been pretty awesome,” Kingsmen golfer JP Guimaraes said in a phone interview. “Obviously rankings are a big deal, kind of a little bit of a validation of the work we’ve put in, but yeah I mean I think we’re all really excited to see that we’re ranked so highly in the nation.”

Grace Cornejo, a junior on the Regals golf team, said in a phone interview that she thinks their first tournament back went well.

“I think it went really well, really smoothly. Considering all the guidelines that were like put in place for our protection. And I felt like it was a good, pretty good first tournament for us,” Cornejo said.

The teams have made a strong comeback, while aiming to adhere to the COVID-19 health and safety protocols and guidelines.

“If a bunch of us test positive then that’s no good for our season either so [we’re] just continuing to be responsible with COVID restrictions but also finding a way to still practice with each other and keep getting better,” Guimaraes said.

With social distancing, mask protocols and increased testing, the golfers has been holding themselves accountable while also continuing to improve their skills.

“I think right now, to be honest with you… the kids on the team are just super excited–just to have the opportunity to play,” Head Golf Coach Jeff Lindgren said in a phone interview.

Guimaraes said the pandemic has caused him to become more appreciative of golfing and being able to play in general.

“I think we’ve been fortunate to kind of feel a bit of normalcy in the pandemic and be able to still at least practice with each other on practice days so it’s been a blessing in that regard but the pandemic definitely still very present in our minds at practice,” Guimaraes said. “The priority is still just being safe.”

“It’s been literally a year since they competed. So we played in the spring of 2020, and then everything got shut down and we didn’t finish the season in the spring of 2020. Then fall of 2020, you know, we didn’t do anything,” Lindgren said. “Now, we are getting going again this spring 2021. So man, it feels great just to be out there.”

During the time off, golfers had to get creative with the way they practiced and kept active due to course closures. Guimaraes said he set up a net in his garage to practice hitting balls before the golf courses in his area opened up.

“It was definitely tough at first when golf courses were closed and you really couldn’t do anything,” Guimaraes said. “It made us appreciate being able to go out and practice just that little bit more.”

Drake Jones, a senior on the Kingsmen golf team, said he was extremely proud of his team in their first tournament and thought first years Jack Spar and Garet Needham did especially well.

“I was really happy with how our freshmen did in the tournament. Both of them had one really good round that really helped the team. And it was nice to see them go out there in their first tournament and have success,” Jones said in a phone interview.

Cornejo said she is just happy to be back feeling like a student-athlete again after not being able to compete for a long period of time.

“I’m really excited that some of these athletic teams are getting back out there and being able to compete because that’s a big part of our experience as student-athletes,” Cornejo said. “And being an athlete for the past year was kind of tough.”