SCIAC should change its restrictions on spectators 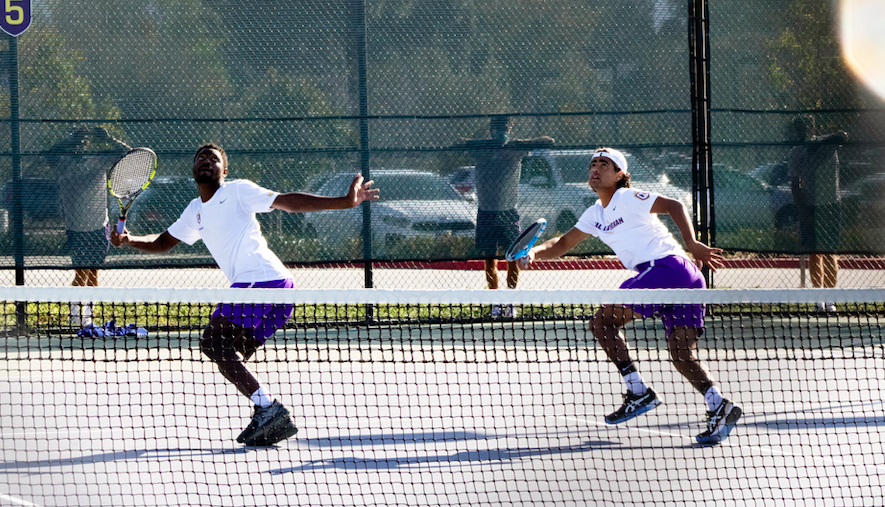 In accordance with SCIAC's prohibition of in-person spectators this season, the bleachers are empty and some sports personnel are seen standing outside of the exterior fencing around the tennis courts at Cal Lutheran during a doubles match on Feb. 27. Most Cal Lutheran competitions are available via live stream on CLUSports.com.

California Lutheran University students have been able to attend classes in outdoor tents since Feb. 16, and before April, some classes will be moving into indoor classrooms. Despite this, spectators aren’t allowed to attend the Kingsmen and Regals’ games.

The abundance of space at the outdoor arenas at Cal Lutheran would provide plenty of space for spectators to come to sporting events this spring while still maintaining a suitable distance between one another.

William Rolland Stadium has an immense amount of space and to not utilize it–while still adhering to the county’s safety guidelines–is a shame.

With that being said, it is still understandable that this may not be completely possible for all teams.

“At least for baseball, I know that since there are around 30 to 35 guys on the roster, some of the guys will have to be spaced out into the stands,” Kingsmen baseball player Sean Blandino said in a Zoom interview.

In this case, it may not be possible for fans to attend the games. The stands are not capable of holding that many fans and players at a safe distance, considering there are only 611 seats, which is really unfortunate. But for the bigger stands like those on the field or by the pool where there are up to 2,000 seats, this excuse isn’t applicable.

These regulations for spectators come directly from the conference our teams compete in–Southern California Intercollegiate Athletic Conference (SCIAC)–but I think there could have been more pushback from our university to fight for in-person spectators.

This is especially disappointing for all the seniors who may not even be allowed to have their parents or family walk them out on their senior night. SCIAC hasn’t outlined their plans for senior nights, but if parents won’t be allowed to watch what could be their child’s last game, it would be heartbreaking, considering how much space in the bleachers is being wasted.

Regals Volleyball senior Sarah Hein said in a Zoom interview that while she understands that Cal Lutheran is being cautious, she believes there can be an agreement that allows spectators to come while still keeping them and the athletes safe.

“It’s upsetting that athletes can’t have family in the stands to support them this semester especially for athletes who don’t have any plans to return in the fall or spring semester,” Hein said.

Blandino also said allowing spectators at games is a similar level of risk to allowing indoor or outdoor classrooms and therefore should be allowed by the institution.

As a senior student-athlete myself, I am devastated that we cannot have our loved ones watching the last games of our careers. COVID-19 has already taken so much from us in the past year, and it hurts to think it will also prevent all student-athletes from having friends and family there watching them in the stands when we are more than capable of providing a safe space for people to attend in person.

I understand that a lot is going on right now and that the pandemic is still very much present. But I also think we’ve gotten to a place where if we can allow students to meet up in outdoor classrooms, then the least we can do is allow families, students and community members to come back to Cal Lutheran sporting events at a safe distance while wearing masks.

If Cal Lutheran mandated masks at games, put a limit on the number of people who could attend and regulated the distance between spectators at games, then I truly believe this could be a safe possibility for us as a school.

I know that because this is my last season, it would mean the world to me to have the people I love most safely watching some of the last games of my career.

People need this type of normalcy back in their lives and if we as a school can offer it safely, then I feel like it is our duty to do so.