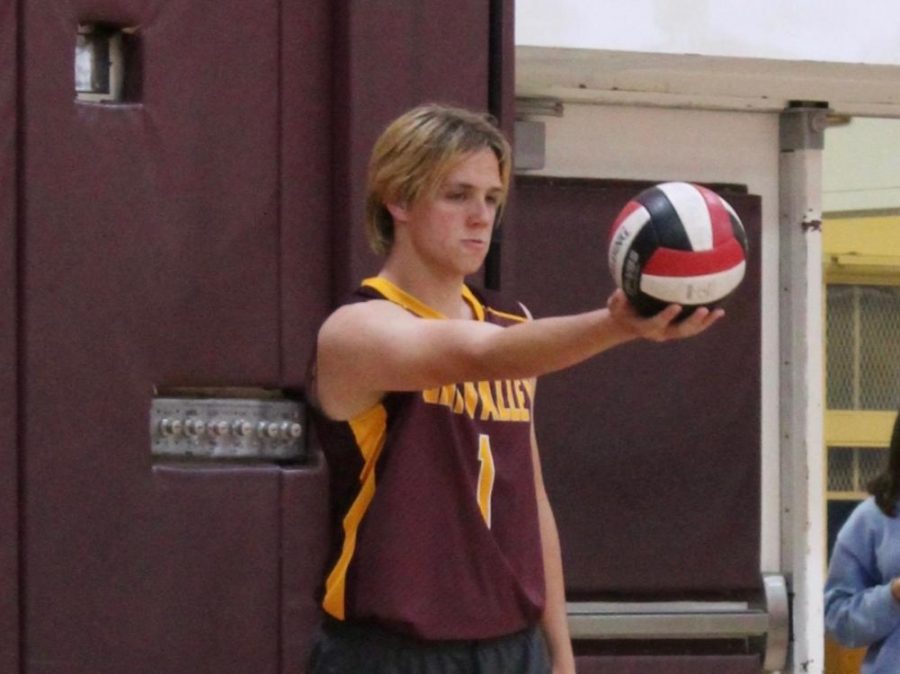 Ryker Linn, a first-year right-side hitter for the Kingsmen Volleyball team, is known for his ability to find the hole in the block and work hard.

Ryker Linn, a first-year on California Lutheran University’s Kingsmen Volleyball team, has put in the work in preparation for his first collegiate matchup against the University of Saint Katherine, this Saturday, March 27.

Linn, who played for four years on Simi Valley High School’s boy’s volleyball team and was team captain his senior year, has quickly acclimated to the new team since they were officially allowed back on the court earlier this semester.

Head Coach of Cal Lutheran’s Men’s Volleyball team, Kevin Judd, said in a phone interview that he is still getting to know all of his first-year players and expects to have more time to do so by stepping back into the gym after almost one year away due to the NCAA’s suspension of play. Since practices began in mid-February, Judd said he has noticed a powerful quality to Linn and he is glad to have an athlete who is willing and able to work hard.

“Ryker is coming in working hard, a little raw, he has some fine-tuning that needs to be done, but he is a kid that is listening and is very respectful to the coaching staff and what we have to say,” Judd said. “He wants to get better and that’s something we want as coaches.”

Standing at 6 feet, 4 inches tall, Linn is hard to miss and is known by his teammates for his ability to deliver powerful spikes.

“It’s kinda cool because he hits the ball really hard, and that’s quite a lot because he jumps high too. He crushes the ball. He always manages to find the seam in the block, when there are two blockers and there’s a hole there or he can get around the block,” Senior Kingsmen Volleyball player Sean Fitzpatrick said in a phone interview. “He does a good job when he hits, he finds the open floor, and he gets a lot of kills. Realistically, you can’t ask for much more than that.”

As a team player, Linn said he enjoys the cooperative nature of his sport and how a team’s success cannot come from a single individual.

“My favorite part about competing, besides winning, is seeing how the team flows together, one of my favorite parts about volleyball is that you could be the best volleyball player in the world with a team of five others who are particularly good and that team won’t do very good,” Linn said.

During his senior year, he made the roster for the Legacy Volleyball Club in Santa Clarita.

Judd said when Linn was playing in high school one of his coaches happened to be a Cal Lutheran alumnus.

“One of our first CLU Kingsmen volleyball players, Hunter Horn, graduated and got into teaching. He’s teaching in Simi Valley High School and also coaching, so Ryker was an athlete of Hunter’s, and Hunter of course knew CLU very well and probably pushed Ryker in the direction of CLU,” Judd said.

Linn said he is currently studying to earn a degree in history.

“I plan on getting my degree in that and then staying for a couple of years to get my credentials to be a history teacher,” Linn said.