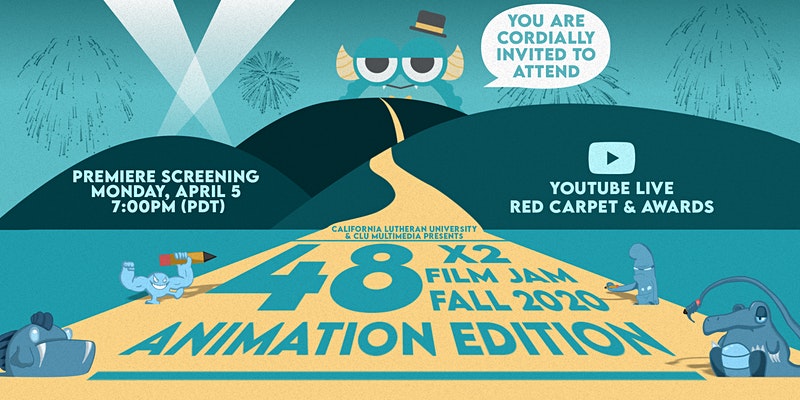 This year's Film Jam was doubled for a total of 96 hours. Participants created animated films that will be showcased at 7 p.m. on YouTube.

On Monday, April 5, five teams’ short films will be up for first, second and third place awards at California Lutheran University’s 48 x 2 hour Film Jam Screening that will be held virtually on YouTube live stream.

Cal Lutheran’s Film Jam challenges teams to create a five-minute film under specific criteria within the 48-hour time constraint, but this year the time was doubled.

“CLU film jam is 48 hours, or in this case 96 hours because it is double for animation, of adrenaline and creativity,” said Cal Lutheran senior accounting major and theatre minor Jacob White in a Zoom interview. “The name, the occupation, the line of dialogue and the prop are all set in stone for all teams. What is different between each group is the themes you pull.”

White has competed in a total of five Film Jams since arriving at Cal Lutheran and already has a first-place film under his belt.

This year he led team TK-CJ in making their film, “The Florist at the End of the Universe.”

Viewers will see a character named Zarbo whose occupation is an alien florist in all of this year’s submitted films. Those watching should also be on the lookout for the required line, “everything is going to be fine.”

Wyatt Phipps, senior multimedia major, is leading team G-blur, who produced the competing film “Split Between.” In a Zoom interview, he said the 48-hour Film Jam is like a slow burn of intensity.

“It goes from everyone having a good time to everyone being quiet and just working,” Phipps said. “We all had specific roles but as it goes on and as time starts running out, people started getting improv roles.”

This film jam differs from those previous because it will be held virtually. Teams were also faced with the challenge of creating their film while communicating with their team remotely.

“The biggest challenge would be the communication because you’re not in person,” Balladares said in a Zoom interview.

Premieres were traditionally held at the Thousand Oaks AMC, prior to the onset of the pandemic.

“We used to do the screenings at the AMC, obviously we can’t do that now, but it has been a lot of fun doing it virtually and I think a lot of people show up to the YouTube live streams,” Balladares said.

There are positive and negative consequences that come with the shift to virtual; “the biggest difference is you just lose out on that sense of community,” White said.

In past years, first place and ranking teams have been awarded t-shirts, but it is unclear if that will be the case this time.

“Satisfaction and feeling good about what you’ve made is a prize in itself,” Balladares said.

Films will be judged on their incorporation of required elements, production quality and storyline.

“I think what catches people’s attention is something that just looks good or especially professional–that will get you ranked if your movie looks good, but to get first place is to also have an interesting story,” Phipps said.

Balladares said having passion and showing it through your film is what lends to first-place quality.

“It is great that we are able to do the 48-hour film jams at Cal Lutheran because it allows us to kind of make something you’re passionate about, and it unifies people and it kind of teaches us about that people around us,” Balladares said.

More information about the upcoming event and competing teams can be found on the event page.

Past films showcased in Cal Lutheran Film Jams can be found on Vimeo.