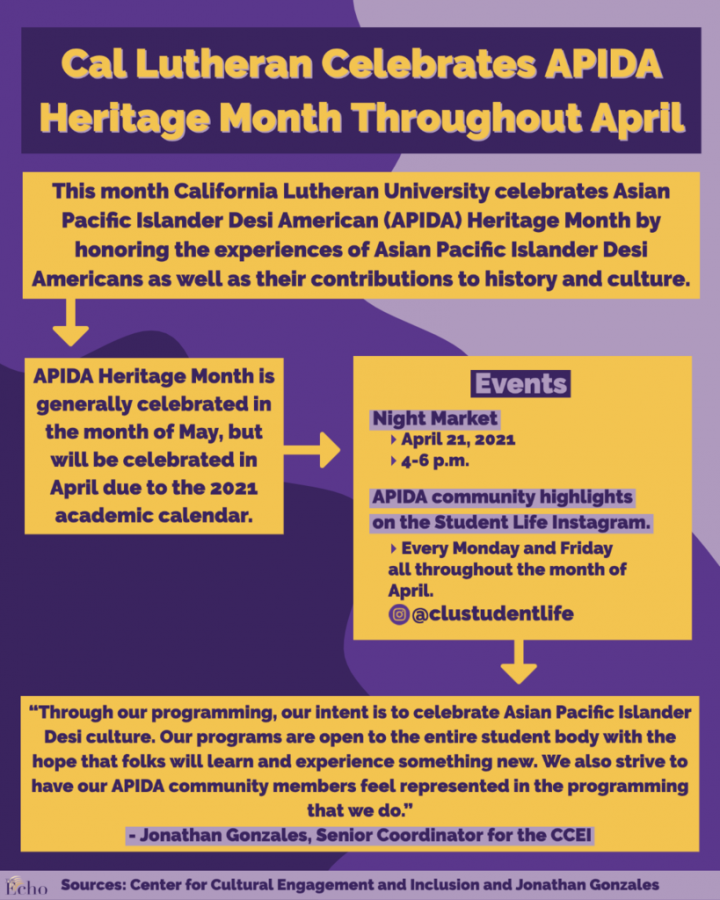 This month, California Lutheran University’s Center for Cultural Engagement and Inclusion (CCEI) is holding a series of events celebrating Asian Pacific Islander Desi American (APIDA) Heritage Month by honoring the experiences of the APIDA community as well as their contributions to history and culture.

APIDA Heritage Month is generally celebrated in the month of May. However, because of the 2021 academic calendar, the CCEI’s festivities at Cal Lutheran will occur this month.

“Through our programming, our intent is to celebrate Asian Pacific Islander Desi culture. Our programs are open to the entire student body with the hope that folks will learn and experience something new,” Senior Coordinator for the CCEI Jonathan Gonzales said in an email interview. “We also strive to have our APIDA community members feel represented in the programming that we do.”

Cal Lutheran junior Terehna Soriano is an intern at the CCEI as well as the president and founder of FILO (Cal Lutheran Filipino Club).

“In general, I feel like it is super important to celebrate [APIDA Heritage Month] at CLU because I feel like we are a very heavily white institution,” Soriano said in a Zoom interview.

Soriano said she feels Cal Lutheran has only begun to celebrate different cultures in a meaningful way in recent years.

“Freshman year I definitely didn’t feel heard or represented in any way and that is the reason I wanted to become a student intern at CCEI,” Soriano said. “Since I feel more represented now, I started FILO and that was so fun because I didn’t think people were going to show up to club meetings. When I started it this semester there was such a big turnout, I was shocked and there were a bunch of freshmen, it was nice to see they didn’t feel what I was feeling my freshman year.”

Soriano and the CCEI are making sure to support APIDA small businesses this month by creating curated boxes filled with their merchandise. These care packages were given away the first week of April.

“It was kinda fun shopping for them because I was excited to support small businesses especially during COVID and it was really successful; the boxes sold out in five minutes” Soriano said.

To kick off APIDA Heritage Month, the CCEI hosted a Playlist in the Park event that played music from a playlist composed of APIDA artists on Tuesday, April 6 from 3:30-4:30 p.m. in Kingsmen Park. Those who attended were given access to a limited-edition sticker and hopia, a Filipino dessert, provided by the Filipino-owned business Hopia Like It.

On April 21 from 4-6 p.m., the CCEI will host the university’s first ever Night Market in Kingsmen Park.

“We were kinda influenced by night markets like the 626 Market. It is a big thing in Arcadia and they have a bunch of Asian food trucks, so we hired Okamoto Kitchen to come onto campus,” Soriano said.

All who join are encouraged to take part in candy lei making, earn stickers for participating in trivia and enjoy a variety of APIDA snacks. Food provided by Okamoto Kitchen will be free for the first 100 attendees.

“Originally we wanted to do it last year before COVID happened; we just wanted to start it off for APIDA Heritage Month. But I hope we can do it for other months, because that would be great to also have other cultures being represented, because you know that is what the CCEI is all about,” Soriano said.

Every Monday and Friday throughout the month of April, CCEI will be highlighting influential members of the APIDA community on the Student Life Instagram @clustudentlife.

“I did a lot of research for the Trivia and also the Instagram Posts. As I am representing a lot of people it is nice to educate myself as well, because even though I am Filipino, there are a lot of other things I don’t know about other Asian Cultures, so it is a good learning experience,” Soriano said.

Those already featured on their Instagram include APIDA members Patsy Mink–the first woman of color to be elected to the U.S. House of Representatives and the first Asian American woman to serve in Congress–and Merle Woo, an Asian American academic, poet and activist currently lecturing at University of California, Berkeley.