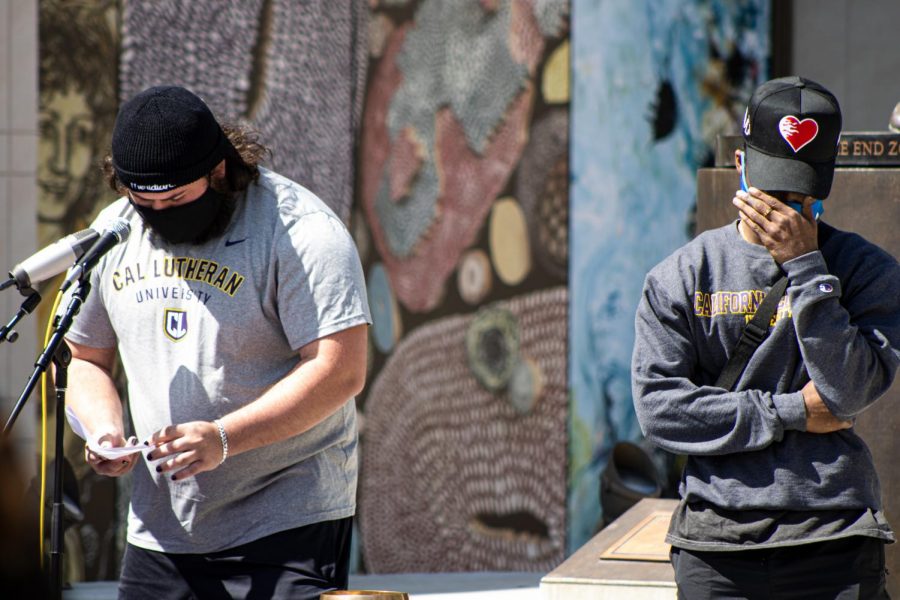 Kingsmen Football players Thomas Bambrick and Cameron Jones share memories of former teammate and friend Chris Leveque at a vigil held at the end of March.

Campus Ministry held a vigil of remembrance for Chris Leveque, a California Lutheran University senior football player known as #78, at the end of March. The service was led by University Pastor Scott Maxwell-Doherty and Campus Minister Hazel Davidson.

“We remember him as we do all students, faculty and staff for two reasons. We recognize their presence among us is a gift from God and so we give thanks to God for sharing Chris with us. Also we remember that Chris had an impact in this community and are grateful for his companionship,” Maxwell-Doherty said.

“Chris was selfless, caring and he was the type of guy that could turn your worst days into your best days. He was the life of the party. He was the guy that when he walked into the room everyone says ‘hey, fuck yeah,’” Bambrick said.

Jones said Leveque was the type of guy to carry a smile and say hi to people walking through campus. Anywhere he went, he was proud to say Leveque was on his team.

“Chris was a light in everybody’s life; no matter if you knew him closely or if you saw him walking to the caf, I bet he said ‘what’s up’ to you,” Jones said.

McEnroe said he appreciated Leveque for two things: the close relationship he exemplified with his mom and sister and his relationship with God.

“When God created offensive guards, he created Chris to have everything you can ask for in an offensive guard as far as that body and athletic ability. Watching him on the football team was a very special thing… I was blessed to have that time with Chris and get to know him,” McEnroe said during the vigil.

McEnroe said his plan is to continue to praise God and the time he was given with Leveque. As for his friends, Bambrick and Jones both said they wish they had decades instead of days.

“He brought with him the breath of life. It has marked us and it has changed us,” Maxwell-Doherty said during the vigil. “Thanks be to God for sharing Chris with us to live, and love, and hope, and laugh and breathe. Amen.”