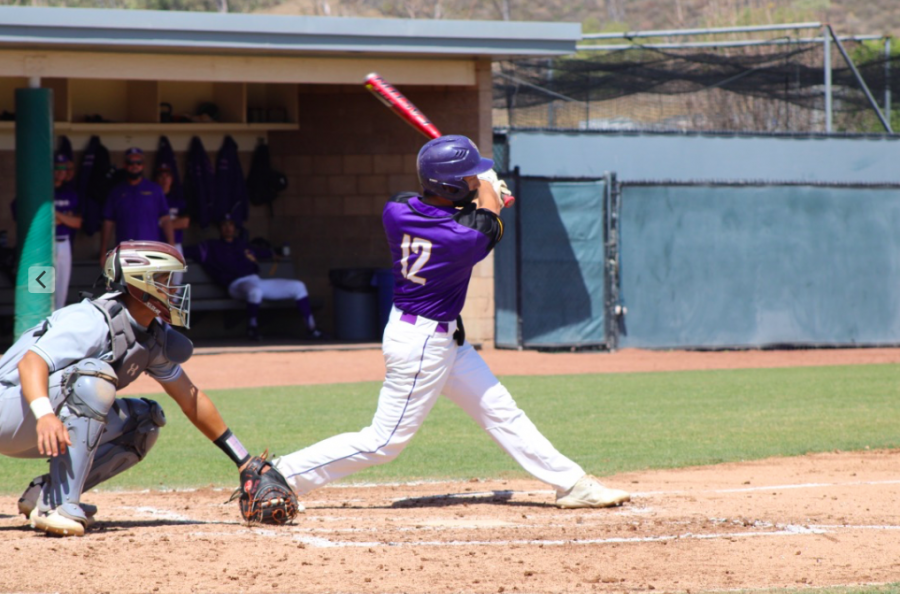 California Lutheran University sophomore and infielder for the Kingsmen baseball team, Kyle Reuser faces University of Antelope Valley pitcher in game one of this weekends series.

The California Lutheran University Kingsmen Baseball team headed east Friday, April 16 to face off against University of Antelope Valley (UAV), a National Association of Intercollegiate Athletics team, to start off their weekend series. After a close game through most of the innings, UAV pulled ahead of the Kingsmen, beating them 9-4 in their first matchup.

The competition between the two teams was just as tight Saturday afternoon, making for a close, low-scoring game as both pitching lineups didn’t make for defensive plays. The teams were scoreless through the first four innings and then UAV took a 1-0 lead in the top of the fifth inning.

The Kingsmen trailed until there was a run in the bottom of the sixth inning to tie the score but fell 2-1 to UAV as they took the final lead in the top of the seventh.

Despite the losses in this weekend’s series, Zach Hardman, senior pitcher for the Kingsmen, said they are looking past this non-conference matchup and getting ready to face another Southern California Intercollegiate Athletic Conference (SCIAC) team next weekend, April 23-24.

“We’re going to use this to propel us into next week. We’re dialing back in on the SCIAC so now it’s really starting to matter, so I think we’re going to be ready for it,” Hardman said.

Kingsmen Baseball Head Coach Marty Slimak, said the UAV batters and pitchers played solid games against them this weekend, but that the Kingsmen are still improving as they’ve only played five games this season compared to UAV, who have already played 20.

Both Hardman and Slimak said they played a better game Saturday than they had on Friday, which was their goal.

“I think all in all, we bounced back from yesterday, which is what we wanted to do and although we didn’t win, if you’re going to lose this is the way you want to do it,” Hardman said.

Underclassmen make up 22 out of the 35 players on the roster for the Kingsmen.

“I think we played a lot better today than we did yesterday and we’re young a little bit and just getting started on our season,” Slimak said.

For the Kingsmen to secure a spot in regionals and the world series, they need to come in first in SCIAC play.

“I think we’re fully confident in our ability. Obviously, there are things we have to work on. Every game is not going to be perfect but we have the right group of guys behind us so the balls in our court for sure,” Hardman said.

Coach Slimak said the team will be able to learn from this loss and continue to improve from it.

“I feel like we’re just starting to improve and I think that’s all I can ask these guys to do is learn from your defeats because you can get a lot more out of defeats than you can from winning,” Slimak said.

The Kingsmen will play Chapman University next weekend for the first time this season.