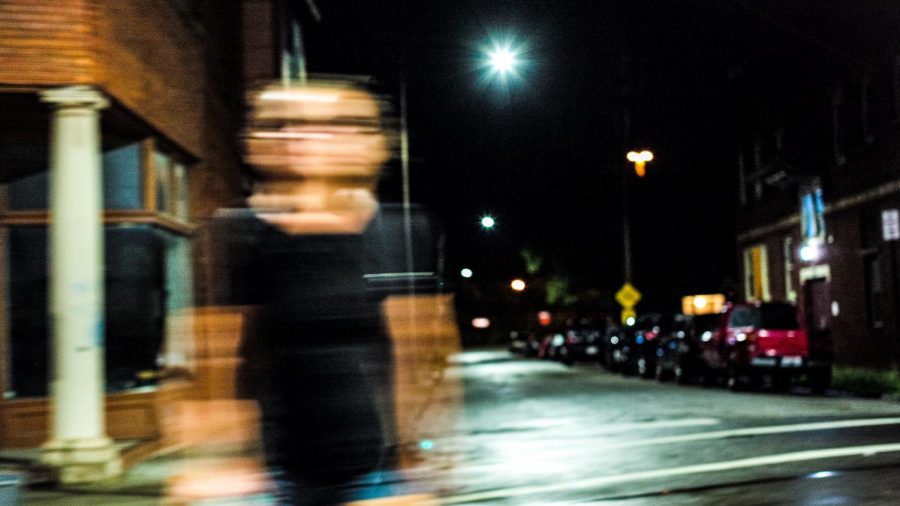 Christopher Mason was approached by a woman who thought he was seeking her services. In his lecture he said he didn't realize he was capturing these blurry people in his photos until afterwards.

The exhibition was curated by adjunct art professor Jennifer Vanderpool and panelists included Cleveland-based photographer Christopher Mason, Executive Director of the Best Practices Policy Project, Penelope Saunders, and Barbara Tannenbaum, chair of Prints, Drawings and Photographs and curator of Photography at the Cleveland Museum of Art.

The panel began with a virtual tour of the Cleveland Museum of Art from Tannenbaum. Featuring a photography collection of about 7,000 photos, Tannenbaum discussed the importance of showcasing different subject matters that serve different communities, as well as the different exhibits the museum has been showcasing throughout the pandemic.

The conversation then turned to Mason, whose photos were showcased at the center of the event.

In 1991, Mason began taking photographs in gay clubs and then discovered an underlying marginalized community within that culture. At the beginning of the pandemic, Mason would drive around Cleveland and take photographs of buildings during gentrification.

“I’m out taking photographs and every once in a while I get this blurry person,” Mason said in a phone interview. “Mind you, it looks like I’m cruising, driving slow, taking pictures of buildings and people are coming up towards my car and I’m getting them in the image, and that’s why they’re blurred out because I’m focusing on the buildings, not the people coming towards my car.”

It wasn’t until he was showing pictures to his father that Mason realized the blurry people he did not mean to capture were sex workers, adding a whole new meaning to his work.

Mason said he has learned is the importance of language, now using the term “sex workers” instead of “hookers.”

Mason said he’s continuing to educate himself on this topic to be better by reading different books and listening to people’s differing experiences.

Saunders continued the panel discussion, describing her background work with the Best Practices Policy Project, an organization that focuses on the health and rights of sex workers. Saunders talked about the normalization of the hatred towards sex workers and the casual acceptance of death and violent depictions in media.

“This is specifically whorephobia, which is based on the hatred of sex workers and the belittling of them as unintelligent and worthless,” Saunders said during the panel. “This stigma intersects with racism, transphobia, misogyny and xenophobia.”

The panel finished with a Q & A session, with questions from Vanderpool and attendees. Topics included how to achieve integrated discussions of controversial subjects across disciplines, the importance of language, and representation of sex workers in television and film.

Rachel Schmid, curator of Collections and Exhibits for the William Rolland Gallery of Fine Art, said attendees of the Common Ground panels have reached out to her and talked about what they’ve learned.

“That’s kind of what we were hoping, that people would participate in the discussion by doing further research after it was over,” Schmid said in a phone interview. “I think that we all have different audiences and I think it’s good to attempt to bridge those audiences together to get exposure to things that we wouldn’t normally have the opportunity to think about.”

Schmid also said she has learned a lot from this series about different social justice issues from different disciplines.

“There’s so many different perspectives that come into play and it’s important not just to hear the genre that you’re used to hearing but hearing it from a different discipline,” Schmid said.

A recording of the panel is available here.