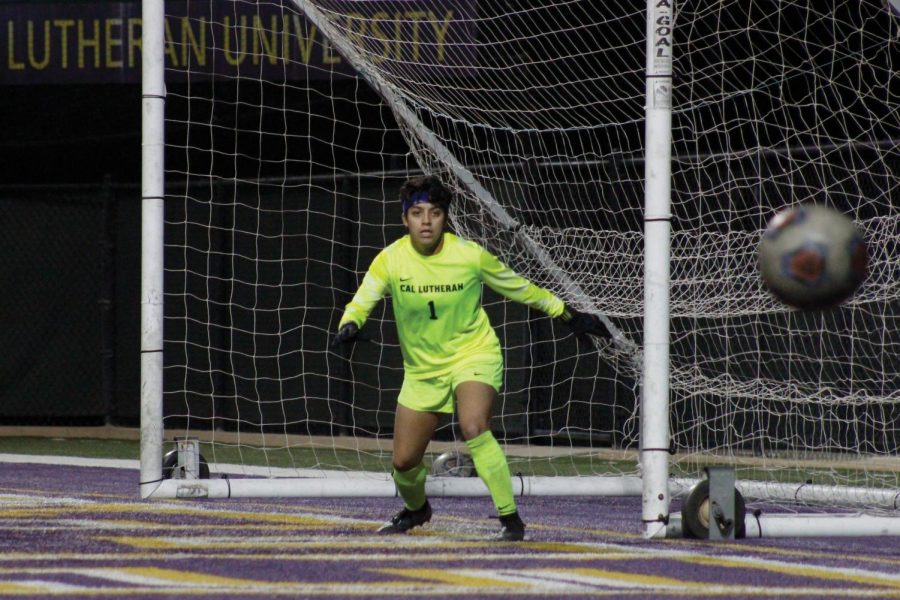 Senior goalkeeper Gabby Flores has begun her senior year with a total of 44 saves within the first 11 games while playing with the California Lutheran University Regals soccer team.

Flores grew up all over the central coast of California during her childhood, but it was in elementary school when living in Paso Robles that Flores found her passion for playing soccer Flores said.

“My parents, they were trying me out in different sports. It started off with softball, and then they wanted to move to basketball, and all these other sports,” Flores said. “When they put me in soccer they said that that was my sport. You could just see that there was a different light that came upon me whenever I played that sport and it’s been with me ever since I was five years old.”

Flores said that her soccer model growing up was the U.S. Women’s National soccer team’s goalkeeper Hope Solo because of her ability to surprise people with her strategy.

“She made these plays that stunned everybody, every time. I just sort of realized that I wanted to be that type of person that whenever everybody thought the goal was going to go in, I would be surprising them with a save and just keeping that ball out,” Flores said.

Flores said this is her last year playing soccer at Cal Lutheran.

“I wanted to give it my all and I wanted to leave a legacy for the girls that are going to be continuing their journey on this soccer team,” Flores said.

The Regals have had a remarkable season so far, going 5-0-3 in the Southern California Intercollegiate Athletic Conference (SCIAC) and 8-3-4 overall.

Senior right-winger Trinity Martinez said that Flores leads by example and her work ethic has encouraged the Regals.

“She gives 110% every single practice and every single game that she’s been in. She really works hard to also spread that out to everybody else [on the team] too,” Martinez said.

Just recently Flores was named Women’s Soccer Defensive Player of the Week by the SCIAC. This is Flores’ fourth time earning this title in her college career. She was awarded this title after making 15 saves and not allowing a single goal to be made in the games against Chapman and Pomona-Pitzer.

“This award is awesome, I’m grateful. Very honored and blessed to have received that award, but I contribute a lot of my success to my defensive line. They are my backbone just as much as I’m their backbone,” Flores said.

Head Women’s Soccer Coach Frank Marino said Flores was the ultimate team player on and off the field.

“She’s one of the most authentic, honest, caring, you know truly great humans you’d ever meet. She truly cares for everybody and wants the best for everybody and I think she’s absolutely a great representation of a Regal soccer player on and off the field,” Marino said.

The next time Flores and the Regals will hit the field is on Wednesday, Oct. 20 at 7 p.m. at William Rolland Stadium versus the Caltech Beavers.